Glass Half Empty: The Future of Water Access is Exceedingly Grim 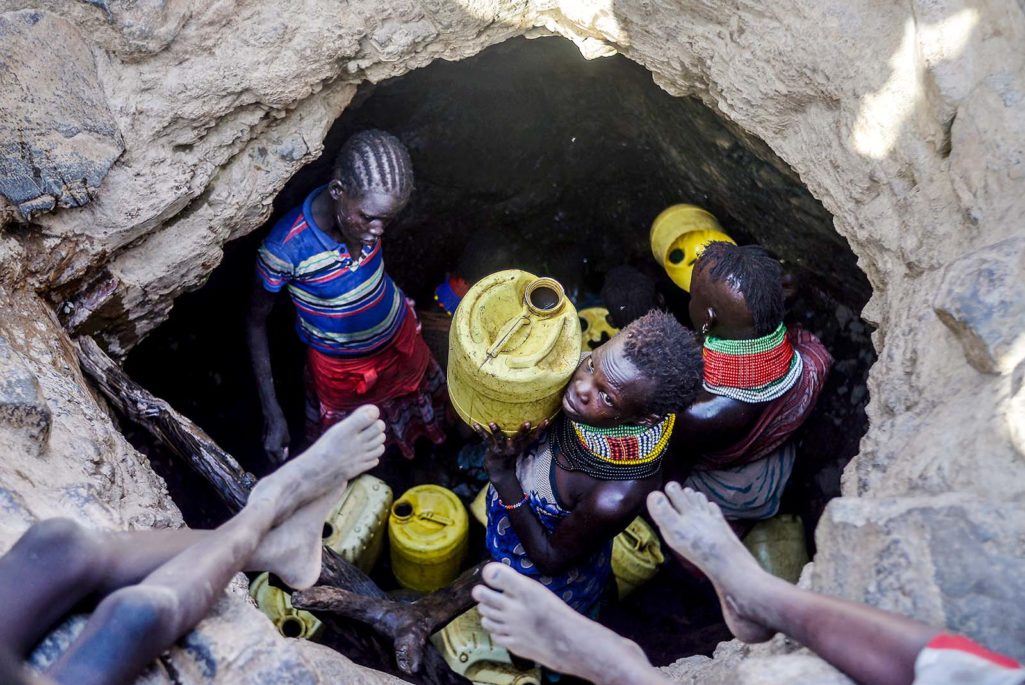 A young girl passes up a jerrycan filled with murky water trickling into a waterhole from underground rocks near Lokitaung in northern Kenya's Turkana county where a biting drought has ravaged livestock population on March 21, 2017.

Water scarcity will become a pressing societal and geopolitical issue in the near future, owing to the popular perception that access to water is a human right. The economic reality—rather controversially—stands in stark contrast to that utopian ideal.

At a recent Brookings Institution conference titled Tackling the “Water Problem”: Challenges facing U.S. regulation, sustainability, and global geopolitics, a panel of experts addressed the topic of water security in the context of geopolitics. Their predictions for the future painted a devastating picture of widespread water scarcity, with the brunt of the impact falling on women, the poor and other marginalized groups of people.

Betsy Otto, the global director of the World Resources Institute’s Water Program, opened the panel using statistics to lay out the global scope of the problem. “By 2025, 1.8 billion people are going to be living in areas where they have absolute water scarcity,” Otto said. “As much as 40 percent of the world’s population … by 2035 could be living in seriously water-stressed areas.” The crisis, she added, would only be exacerbated by climate change and the onslaught of longer and more extreme storms and droughts. “We are in the throes of a quiet but growing crisis in much of the world that we are really sort of just ignoring,” Otto said.

However, while Otto addressed projections dating forward to 2025 and 2035, Kumud Acharya, an engineer who leads the Ecological Engineering group at the Desert Research Institute, emphasized that many low- to middle-income countries already struggle with water scarcity and have been forced to reckon with the problem for many years.

“I was born and raised in Nepal, and I’ve seen 60, 70 percent of people in the country I was born, they still don’t have clean drinking water supply,” Acharya said. “In remote areas of Nepal, people actually have to walk miles to get a bucketful of water, still. And it’s really done by women.”

The Economic Value of Water

However, the panel’s discussion of water scarcity was derailed by a more ethical and philosophical question: If water is a human right, is there such a thing as “illegal water,” or “water theft?”

The question was raised by Vanda Felbab-Brown, a senior fellow at Brookings’ Center for 21st Century Security and Intelligence and the author of a new Brookings report titled Water Theft and Water Smuggling: Growing Problem or Tempest in a Teapot? In her report, Felbab-Brown defined “two broad schools of thought,” standing in opposition to each other on this topic: The first, she wrote, “defines water as a basic human right, and often opposes the pricing of water, particularly increases in prices.” The second “sees water as a commodity to which value needs to be assigned … to maintain its sustainability and efficient use.”

“We need to be more realistic about the fact that water does need money. If you pay for it, it will cost less.”

Based on the findings of her report, Felbab-Brown asserted that water theft is indeed possible. She argued that despite the reality of inequities in water distribution, illegal water sourcing ultimately hurts everyone: Theft increases scarcity across the system, subjects the marginalized to legal repercussion and increases in policing, and strains existing water utilities by withholding funds for regular maintenance and upkeep.

Chris Gasson, publisher of Global Water Intelligence, agreed with Felbab-Brown’s conclusions, and offered his analysis of the overarching economic problems with water theft.

“The total amount of what you might call the unnecessary cost of water—that is, the time wasted, the health costs, the coping costs—that more or less adds up to the same amount of money that you would have to spend if you were going to give everyone 24/7 potable water plus a sewer connection with waste water treatment,” Gasson said. “We do need to get a hell of a lot more realistic about the fact that water does need money. If you pay for it, it will cost less.”

Felbab-Brown cautioned that it was increasingly easy to envision a future in which water scarcity might be used as a cudgel in political conflicts. She cited India and Pakistan as key examples: Indian Prime Minister Narendra Modi has already threatened to deny Pakistan water in response to tensions over terrorism between the two states.

Even barring the question of political and violent conflict, the panelists agreed that urbanization was a huge burden on water supplies. “Cities are growing and being developed without sustainable water planning,” Acharya said. “Obviously, we need to deal with climate change, but [urbanization] is a more pressing issue for me right now.”

Gasson proposed an economic solution. “Dubai was building [desalination] plants every two years, or every one year until 2008,” he said. “And then in 2009, they decided that they were going to—for the first time ever—charge Dubai citizens for water, and they actually charged a fairly decent amount. And immediately, overnight, water demand in Dubai fell by 15 percent.”

“It can all be done,” Gasson said, with a chuckle. But given the weight of the question, it’s not clear that the audience nor his fellow panelists felt similarly humored by his assessment.

Stefan Ellerbeck Senior Writer, Formative Content at the World Economic Forum
URL: https://www.brinknews.com/glass-half-empty-the-future-of-water-access-is-exceedingly-grim/
Get ahead in a rapidly changing world. Sign up for our daily newsletter. Subscribe
​​