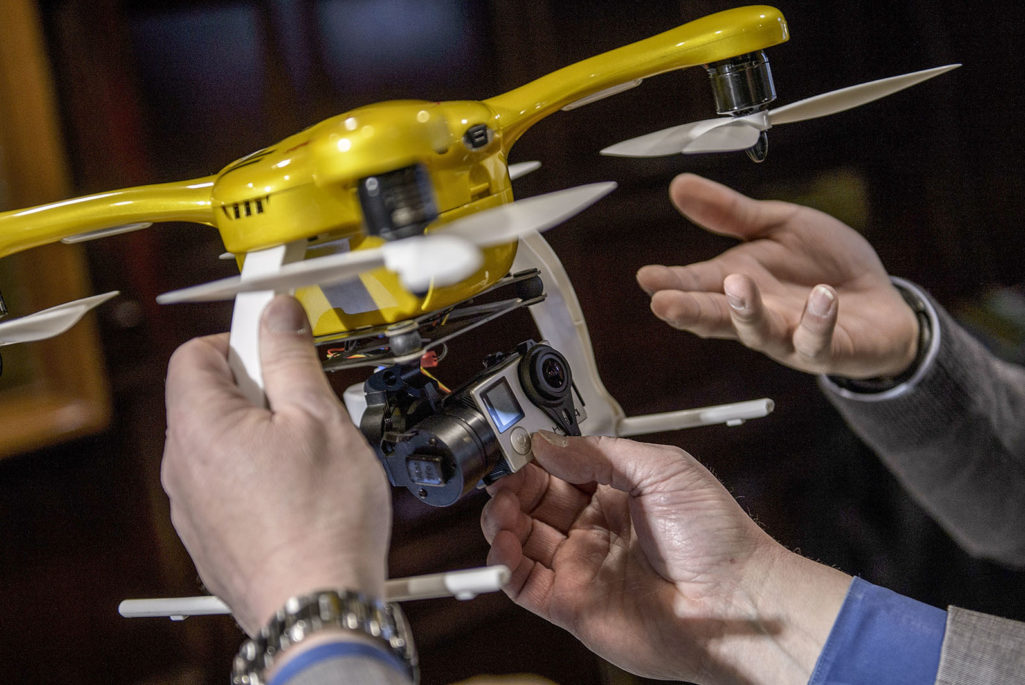 People inspect a a remote control aircraft during a press conference by the Small UAV Coalition January 20, 2015 in Washington, DC. The group who advocates for mall remote controlled, frequently multi rotor, aircraft held the conference to democrat their technologies and speak about legal issues effecting the industry.

The regulatory world of unmanned aerial systems (UAS) or drones is a Wild West of the air atmosphere; there are no globally “harmonized” regulations for drones. Regulations often differ, sometimes dramatically, from country to country.

For the drone airspace to become commercially viable national and international laws will have to be rewritten. An alternate path to regional laws would be the adoption of a set of international aviation laws. The International Civil Aviation Authority is currently working on guidance for drone operations, but the process is expected to take some time.

A recent report from Marsh outlines the crucial need for such regulations:

Clear and harmonized regulation would enable startup operations to plan with certainty, public perception to improve, and entrepreneurs and businesses to expand without feeling held back by “red tape.” This, in turn, would fuel the growth and experience of this type of aircraft.

Establishment of such regulations is expected to unlock a market worth $82 billion by 2025 and create 100,000 new jobs.

While regulations are a major hurdle to the development of a viable commercial drone market, there are significant technical hurdles, too, mainly in the area of “sense-and-avoid” technology.

Current commercial drone use depends on low-scale, visual line-of-sight (VLOS), which requires a user to guide the airborne vehicle to its destination, moving it around and over static and other airborne objects. Sense-and-avoid technology operates on a system of integrated sensors and avionics that enable the drone to “see” and avoid obstacles. The full deployment of this technology allows more complicated flight paths and beyond-line-of-sight (BLOS) operations within civilian airspace. And while there are some companies working on integrating this technology into drone operations, full-scale use is still several years away.

Tom Friedman Author, Reporter and Columnist for The New York Times
URL: https://www.brinknews.com/global-drone-regulation-in-4-charts/
Get ahead in a rapidly changing world. Sign up for our daily newsletter. Subscribe
​​