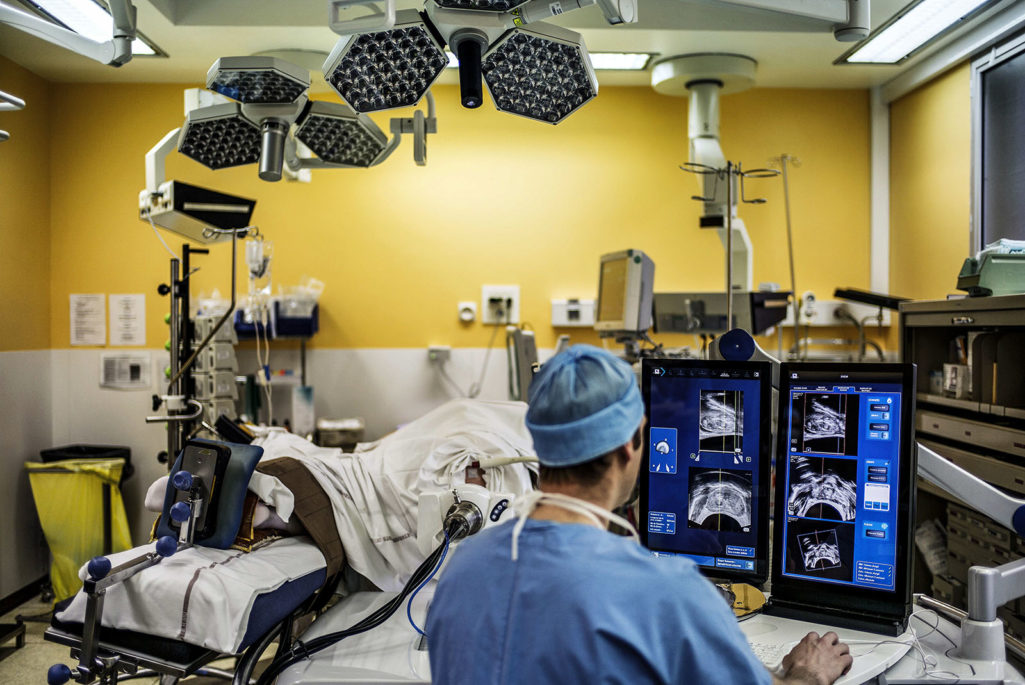 A surgeon sitting in front of screens of a Focal One device performs a robot-assisted prostate tumorectomy using ultrasound imaging.

Most of the time when people talk about the U.S. health care system they refer to the quality, cost, and coverage. What is rarely discussed is the fact over the last decade health care has emerged as a major source of U.S. employment and thus a leading indicator of the vitality of the economy.

Some may argue that the growing portion of the economy attributed to health care is a good thing, however in its current form health care’s preeminence represents a clear and present danger to the U.S. economy. To understand why a health care-driven economy is a risk, one should compare health care to other growth sectors from the past.

Since 1980 the share of workers in the health care sector has almost doubled to 13 percent of all workers (more than manufacturing, retail, or construction sectors). No other sector has increased its share so drastically. In fact, without the growth in health care workers, the number of U.S. workers would actually have shrunk over the last decade. Given population growth rates, it’s astounding that one sector could contribute all the net job growth in the country.

Health care’s mid-twentieth century analog is the manufacturing sector. Between 1950 and 1970 the number of jobs in manufacturing grew by 5.4 million to a point where nearly one-in-four workers were employed in a factory. Similarly, the percent of people employed in health care doubled and now represents almost one-in-seven jobs. And both health care and manufacturing continued to grow, or rebounded quickly, despite severe national recessions during their respective periods of expansion—a classic indicator of the shifting composition of the workforce.  During the 1975-1977 recession the economy as a whole contracted by over three percent and yet, manufacturing actually grew (with a slight dip in 1975). Similarly, during the last recession, 7.4 million workers lost their jobs all while health care created over one million new openings.

Two different growth sectors at two different points in time couldn’t have created more different economies. For example, during the manufacturing era (1950-1980) annual GDP growth rates were more than twice as high as they have been since health care took over in 2000. And during manufacturing’s heyday real median household income grew by over a one-third, while in the health care era they have actually fallen by ten percent. In fact, a look at virtually any economic indicator—the trade deficit, government and household debt, income inequality, savings and investment rates—the economy looked stronger when it was driven by manufacturing.

To be fair, a lot happened in the post-WWII era that created such a prosperous time period. The destruction of Europe and Japan by the war made the U.S. the world’s factory and the entry of women into the workforce created a boon of new capacity. But despite those important elements the fact the economy was growing through production firms compared to a non-traded service, like health care, has some very real implications for the wellbeing of the economy.

In its current form health care’s preeminence represents a clear and present danger to the U.S. economy.

The primary reason for this is that the manufacturing sector is exposed to international competition and thus firms invest in new technologies to drive down costs and improve quality. The U.S. health care sector is not. The easiest way to identify these investments in cost-saving technology is in the actual change in prices. According to the Consumer Price Index, the average cost of a U.S. manufactured good has declined by .01 percent while the costs of hospital services have risen by 3.8 percent over the last ten years. While the health care sector does invest in technology, the goal has not been to bring down prices or improve efficiency but to increase asset utilization. This has led to low wages, high costs and productivity and innovation moving at a snail’s pace.

As long as the health care delivery sector is not an innovative sector, the U.S. economy will remain at risk of falling further behind where it once was. The question becomes: Could the health care sector look more like manufacturing? A number of new disruptive forces suggest it could.

First, health care companies are facing unprecedented cost pressures. Traditional fee-for-service reimbursement plans have padded profits and immunized hospitals from worrying about cutting costs. Yet by 2025 it’s anticipated that over half of hospital revenue will come from value-based payments. If physician offices don’t adopt techniques and technologies to cut costs, they will risk, for the first time, going out of business.

Second, consumers are now controlling their own care. Traditionally, health care providers have made most of their revenue from employer-based insurance; however individually purchased plans are poised to surpass employment plans. As consumers are faced with the high cost of care they will begin to shop, seeking the highest quality for the lowest costs. Given the price of hospital services can vary widely even within a particular city, consumers could tip health care into a competitive marketplace.

Finally, new competitors are attacking the traditional health care industry at all sides. Internet companies are launching wellness apps to compete on preventative care while outpatient clinics like CVS’ Minute Clinics are lowering the cost of basic care and competing head-to-head with hospitals. As Jonathan Rauch puts it, “Health care is beginning to taste the disruptive culture of Silicon Valley, retailing, and many other American sectors.”

The U.S. health care sector is at an inflection point. If macroeconomic forces push the sector to become more competitive and to invest in cost-saving technologies—as manufacturing did in prior decades—then one could envision a future where health care drives economic growth, not hinders it.

Scott Andes is a senior policy analyst at the Metropolitan Policy Program. His work focuses on advanced industries, innovation and technology, and economic development. Prior to joining Brookings, he was a research analyst at the Information Technology and Innovation Foundation and also special assistant at the Democratic Senatorial Campaign Committee.