How Can Leaders Nurture ‘Crazy’ Ideas in Business?

October 10, 2019 An interview with
Safi Bahcall
Author of Loonshots: How to Nurture the Crazy Ideas that Win Wars, Cure Diseases, and Transform Industries 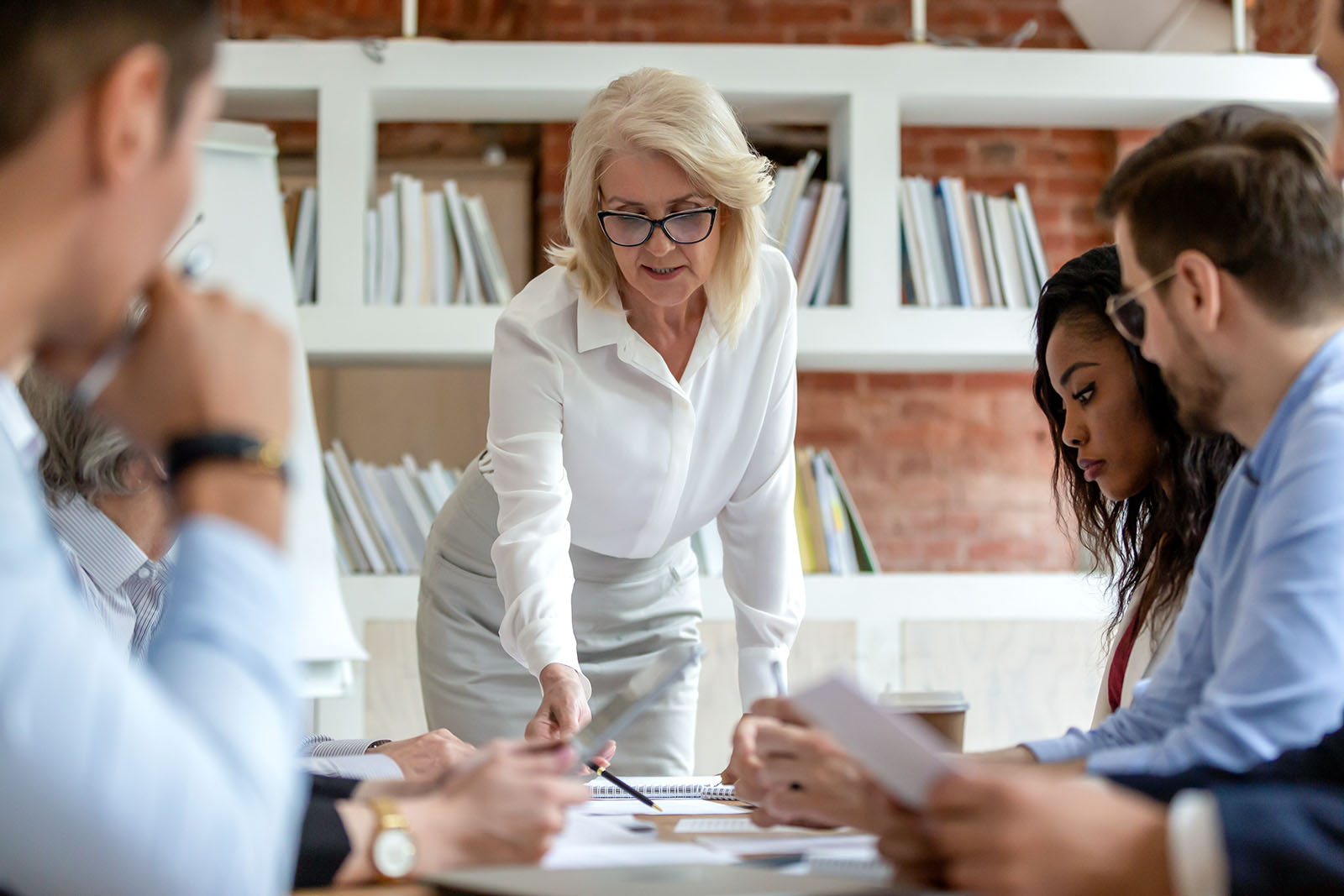 An executive working with her employees during a meeting. Learning how to interpret your business's "moonshots" and "loonshots" can help you organize the many ideas that are created by your team.

Finding room for ideas that are odd or do not conform to company practices is a constant challenge for any large organization. Such ideas can be disruptive and costly, yet those that succeed often yield outsize results.

Former biotech CEO Safi Bahcall is the author of Loonshots: How to Nurture the Crazy Ideas that Win Wars, Cure Diseases, and Transform Industries. BRINK asked him about the difference between his so-called loonshot ideas and what people call moonshots.

Safi Bahcall: A moonshot is a destination. Nurturing “loonshots,” which are those crazy ideas that nobody thinks will work, is how we get to that destination. For example, when President John F. Kennedy declared in 1961 that we would put a man on the moon by the end of the decade, that was the original moonshot — a big goal that everybody could get excited about.

The idea that got us to the moon, however, was actually developed about 40 years earlier by a man named Robert Goddard: liquid fuel jet propulsion. In other words, rockets. When Mr. Goddard suggested that idea in the 1920s, he was widely ridiculed. The New York Times published an editorial about how Mr. Goddard didn’t understand the basic laws of physics, that Newton’s laws of action and reaction mean that rockets can never fly in outer space. There’s nothing to push against.

Fourteen years after Mr. Goddard died, the day after the successful Apollo 11 rocket launch to the moon, the Times issued a retraction saying, “Apparently rocket flight does not violate 17th century physics. And the Times regrets the error.”

Declaring a big goal — a moonshot — is a nice thing to do. But what’s really important is nurturing those loonshots, the ideas that challenge accepted beliefs. That’s because the big ideas — the ones that end up transforming industries — are often neglected and dismissed for years or decades. Since there wasn’t even a good word in the English language for that kind of idea, I made one up!

BRINK: Surely a lot of ideas that challenge existing beliefs deserve to be written off. There’s a good reason for dismissing them?

BRINK: And how do you do that?

Mr. Bahcall: You probe to see if there’s a testable hypothesis. You want to nurture those testable ideas inside your company, particularly when those ideas challenge your beliefs — the beliefs about your business or products that you’re sure are true. You don’t want to wake up one morning and read that your competitor proved you wrong, and there’s a new product coming at you like a bullet to your head. Too late. You’d much rather find out about it early, internally, rather than too late, from a competitor.

For example, for a long time, the idea of a drug that lowers cholesterol was written off as completely ludicrous; every cell in your body is made of cholesterol. That idea turned into the statin drug class, which has sold, cumulatively, about a third of a trillion dollars. Or, here’s another crazy idea: that you could make a switch that wasn’t a filament, but rather operated inside of a sold, semiconductor device. That was considered ludicrous. But that became the transistor, the most important invention of the 20th century.

And those crazy ideas don’t have to just be products. Strategy loonshots — small changes that everyone says are crazy — can turn out to be enormously valuable. For example, there was a young guy who just wanted to sell stuff — he enjoyed retail, so he planned to do what everyone told him: “Go where all the people are, where there’s foot traffic.” In other words, big cities. But his wife doesn’t want to live in the big city. So she says, “I’ll support you as long as you go to a town with less than 10 thousand people.” He likes retail, but he also likes being married. And he likes quail hunting. So he finds Bentonville, Arkansas, a town that borders four states, with four quail-hunting seasons, so he can hunt year-round.

That young guy, of course, was Sam Walton, and that store is now called Walmart. He didn’t introduce a new technology — just a shift in strategy: Open big stores deep in the rural countryside. Everybody said, “That’s idiotic to go where there aren’t people and open a store. What are you thinking?” Today, nearly all of his competitors are gone, and if Walmart were a country, it would be ranked No. 27 in the world by GDP.

BRINK: One of the things that’s interesting about your book is that it’s not another book about business culture, but about how to structure an organization. It’s the structure of an organization that is often a deterrent to these ideas.

Mr. Bahcall: Structure drives culture. By structure, I mean the incentives and processes you create. For example, if you reward rank, you will encourage a political culture: People will shoot down their neighbors’ ideas in order to climb ahead. If you reward results and intelligent risk-taking, on the other hand, you will encourage an innovative culture. This matters because trying to change culture through preaching and cajoling is very difficult, if not impossible. CEOs encouraging everyone to sing kumbaya and hold hands rarely works. There’s a quote from Warren Buffett that goes, more or less: “We once said 95% of behavior is driven by personal or collective incentives. We were wrong. It’s more like 99%.”

You can think of adjusting structure to change culture by analogy with a glass of water. The molecules of water in that glass can either be completely rigid, solid ice, or roaming around freely, a liquid. Yelling at the molecules in a block of ice to “loosen up” won’t do anything. But, a small change in temperature can get the job done. A small change in temperature can melt steel.

BRINK: Is there an ideal structure in your view for getting these ideas into production that you’ve come across?

The problem is that there are two phases. In one phase, groups will embrace wild new ideas, because that’s what their incentives favor: their stake in outcome is bigger than any perks of rank. Think startups. In the other phase, groups will reject promising but risky ideas and opt for more of the same — growing the core franchise — because that’s what their incentives favor.

It’s a problem because companies need to do both and at the same time. They need to deliver on their core franchise, on time, on budget, on spec, otherwise they won’t have a business, and the cash flow to fund all those risky ideas will disappear. But they also need to develop those new ideas. The problem is that a system can never be in two phases at the same time. A glass of water can’t be both solid and liquid.

There’s one exception, however, to that rule. Right on the cusp of a transition — life at 32 degrees Fahrenheit — blocks of ice will separate from pools of liquid, and they will coexist. Not separately, but dynamically, with molecules going back and forth between the two. Translated back to teams and companies, that means you need to separate your artists/creators working on the new and your soldiers working on the core.

That’s the easy part. The hard part is managing the tension between the two. The failure point in most innovation is almost never in the supply of new ideas; it’s in the transfer to the field. By that I mean bringing the baby-stage ideas out to the field not too early and not too late. And bringing the high-quality feedback, since nothing works well the first time, back into the lab, also neither too early nor too late. And doing that continuously. In other words, the best companies and leaders focus on managing the transfer, not the technology.

That’s one brief summary, but there’s a lot more. The advantage of understanding a transition is that you can begin to manage it. You can identify the small changes to structure that allow you to design more innovative teams and companies. Those are the equivalent, for example, of sprinkling salt on your sidewalk when it snows. Adding salt manages the transition from solid to liquid: It lowers the freezing point. There are four such control parameters inside companies, described in Loonshots, that help you manage the transition from political to innovative.

Those two forces lead to the two phases. The best companies create structures where those two phases can coexist in dynamic equilibrium. In other words, they have learned to achieve life at 32 degrees Fahrenheit.

Author of Loonshots: How to Nurture the Crazy Ideas that Win Wars, Cure Diseases, and Transform Industries

Safi Bahcall is the author of Loonshots: How to Nurture the Crazy Ideas that Win Wars, Cure Diseases, and Transform Industries. Previously, Bahcall was the former biotech CEO.