India’s Tax Reform: A Search for the ‘Goldilocks Scenario’ 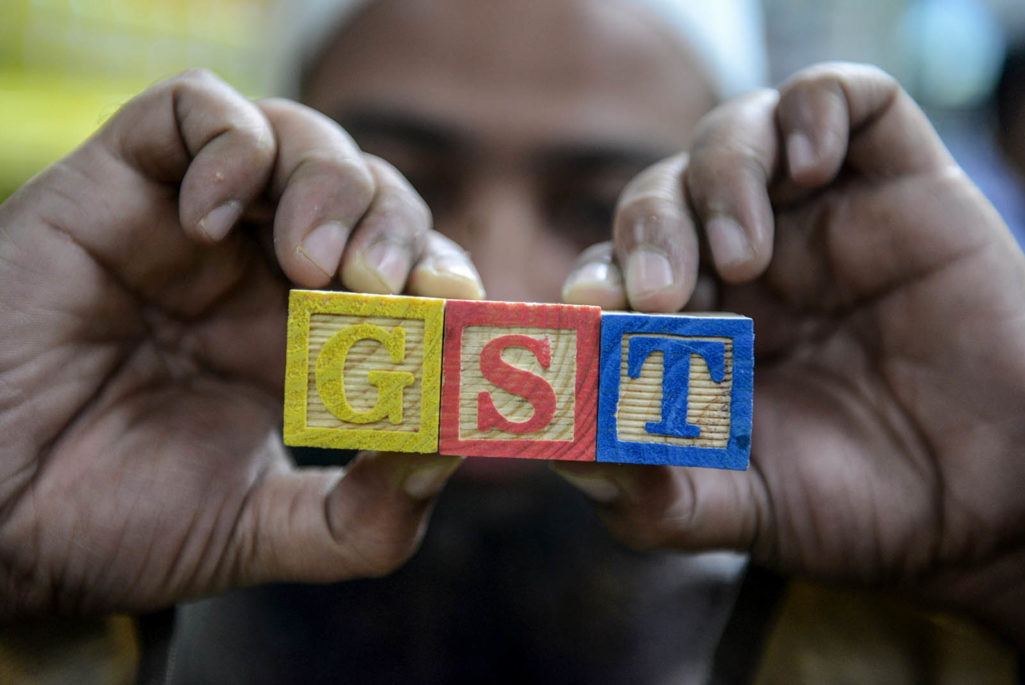 An Indian consumer goods trader shows letters GST representing "Goods and Services Tax" (GST)at his shop in Hyderabad on August 3, 2016. The GST will replace a patchwork of central and state levies on goods and services and is one of Prime Minister Narendra Modi's biggest reforms since taking power in May 2014.

The passage of India’s Goods and Services Tax (GST) bill is seen by the global investment community as an inflection point for the South Asian economy. While the GST has had profound impact in many countries, it leaves many questions unanswered in India and implementation will prove challenging.

The GST is a single, indirect tax applicable to the whole country and charged on the supply of goods and services from manufacturer to consumer that eliminates the cascading burden of “tax on tax” through the supply chain.

The GST Bill (actually a constitutional amendment) was approved by the Indian parliament in early August and ratified by over 50 percent of the state legislatures with a target implementation date of April 1, 2017. It will bring down the current aggregate taxation structure from the range of 26-30 percent to a range of 15-20 percent.

Not All Smooth Sailing

While passing the GST itself is a landmark in some respects, it is only a job half-done. Most importantly, execution challenges remain. India’s federal system of governance fundamentally makes it complex to jettison the earlier framework and effectively implement the new tax system. Like in any change management project, people’s ability to adapt will determine the speed of implementation. Therefore, initial and continual staff training across the country will be crucial to make the GST work.

Implementation by April 1, 2017 remains an ambitious target due to the sheer infrastructure requirement in the country. The IT platform—called GST Network (GSTN)—requires the National Securities Depository to compile the necessary data for some eight million traders and service providers in collaboration with the central and state governments, and issue each entity a GST ID number to retrieve of all relevant data, similar to an income tax PAN card. Tax accounting necessitates comprehensive inter-state and center-state administrative arrangements be made before enforcing the new tax system. Finally, a lot of work is required to formulate the mechanism for controlling tax evasion.

PK Sinha, the Cabinet Secretary, recently stated that the Indian government was working overtime to meet the implementation deadline. That date is crucial since it marks the beginning of a new financial year and the goal is to avoid the unnecessary complexities that would inevitably arise from any mid-year changes to tax structures.

While India’s passage of the GST bill itself is a landmark in some respects, it is only a job half-done.

The government is even considering advancing the winter session (one of the three sessions the parliament conducts annually) of the parliament to approve the supporting legislations of the GST Bill to give itself more time for implementation. The cabinet has also approved the establishment of a GST council, a powerful apex body headed by the Finance Minister, to actively manage the GST tax rates and thresholds.

Proposed Benefits of the GST

Like all new initiatives, after initial hurdles, the GST system will eventually stabilize and is expected to bring significant benefits to the Indian economy. Apart from reducing the incidence of tax on the organized manufacturing sector, it will standardize taxes across states. This will drive efficient resource allocation for businesses and reduce administrative costs. It is also expected to improve India’s performance in terms of the World Bank’s ‘Ease of Doing Business’ ranking—India is presently ranked 130th globally.

For the government, it will provide a streamlined and stable source of fiscal revenue. Additionally, it will lead to the creation of a more comprehensive tax base as virtually all goods and services will be taxable, with minimum exemptions. India has had a persistent problem with tax evasion and the GST helps to plug the loopholes for tax avoidance.

The tax reform is also deemed credit positive over the medium term by the global ratings agencies. It could add 1 percent to India’s GDP over the next couple of years, while avoiding significant inflationary pressure as it is likely to influence only 20-25 percent of the consumer price index (CPI) basket.

In the consumer durables sector, companies that are not enjoying current tax exemptions will benefit from the lower tax rates and GST will help reduce the pricing gap between the organized and unorganized sector. The organized players will indirectly benefit from warehouse/logistics costs across the operational and non-operational segments, which can add almost 300-400bps in operating profitability.

Under the current tax regime, FMCG companies are already paying less tax, but on the operational front, warehouse rationalization and reduction of overall tax rates is expected to generate savings which could cumulatively range between 200-300bps. GST is also expected to stimulate lower carrying costs for inventory in this sector.

On the other hand, the impact of the GST on the information technology (IT) industry is expected to range from being neutral to slightly negative. This is triggered by an increase in the current tax rate of 18-20 percent under GST from 14 percent. The impact will be similar on the telecom sector—telecommunication services are currently subject to a service tax of 14 percent, which could increase to 18 percent.

In the textile sector, under the new GST regime, there is no clarity on whether a lower rate matching the current rate of 6-7 percent will be charged on readymade garments. Companies may be negatively impacted in case the output tax rate is high.

India is presently the world’s fastest growing major economy—its GDP is growing at 7.4 percent per year and is expected to remain so through 2017.

The last few years have been transformational for the country. For example, the rise of Narendra Modi, who went from being the son of a grocer from what is referred to as a socially and educationally backward class, to the prime minister, has given the country a new outlook.

Modi’s is a story of treading a fine line to find the correct balance between long-term goals of the country with the short-term political agenda. He also has to balance the demands of the extreme right in his own camp with the need for inclusive growth. The GST Bill, along with the bankruptcy reform and the financial inclusion program, are a few of the successes of the Indian government in the past couple of years.

But like in comedy, timing is everything in politics. If reform is unleashed too quickly, the country can potentially implode, but if it is too slow, the electorate and investors lose patience. Few countries have achieved the Goldilocks scenario of finding that “just perfect” equilibrium. And in the backdrop of slowing global growth, India’s recent performance has the potential to capture the world’s imagination once again.