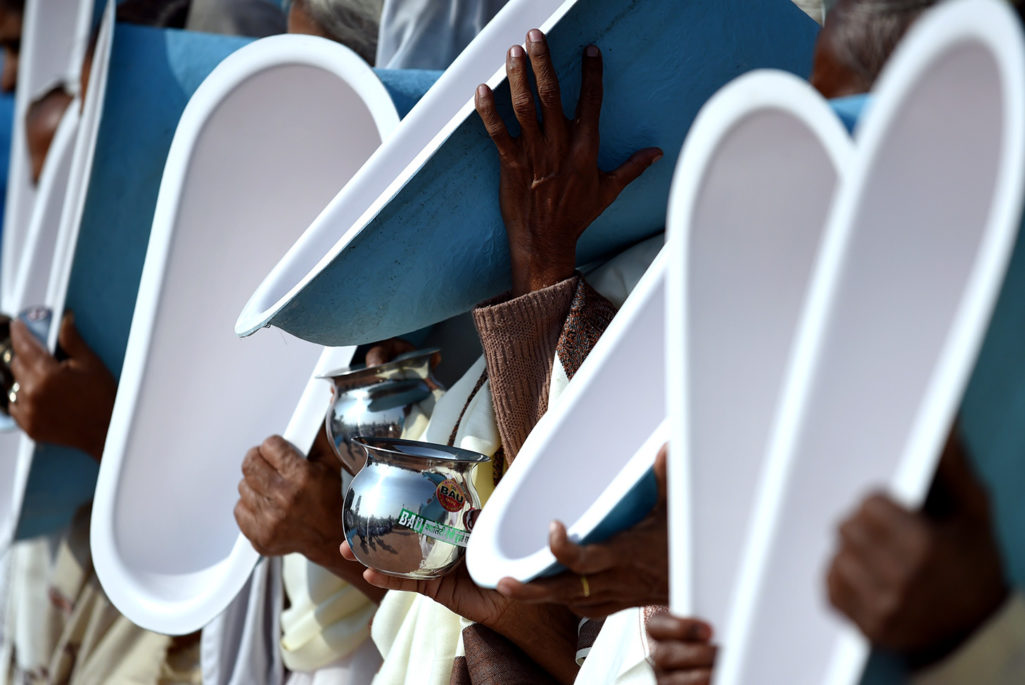 Indian women hold latrines as they participate in the opening ceremony of the three-day International Toilet Festival on eve of World Toilet Day 2014. UNICEF estimates almost 594 million, or nearly 50 percent of India's population, defecate in the open. Some 300 million women and girls are forced to squat outside normally under the cover of darkness, exposed to the risks of disease, bacterial infection and harassment and assault by men.

Some 2.5 billion of the world’s 7 billion people are without access to improved sanitation, which means more people have access to mobile phones—6 billion—than toilets, according to the World Health Organization and UNICEF.

The sanitation issue is dire, causing a range of diseases and lost productivity that ends up costing the world $260 billion annually, the WHO/UNICEF reports. Yet the estimated cost to achieve the sanitation UN Millennium Development Goal—which is to halve the number of people without access to basic sanitation by 2015—is $115 billion (from 2010 to 2015). The money would be well spent. The WHO/UNICEF report estimates the global economic gain for sanitation spending is a $5.50 return for each $1 spent.

“Let’s face it, this is a problem that people do not like to talk about,” said UN Deputy Secretary-General Jan Eliasson. “But it goes to the heart of ensuring good health, a clean environment and fundamental human dignity for billions for people—and achieving the Millennium Development Goals.”

Not that there hasn’t been progress made. Between 1990 and 2012 nearly 2 billion people gained access to improved sanitation facilities and open defecation decreased from 24 percent of the world’s population to 14 percent.

Mark Campanale Founder and Executive Chair of The Carbon Tracker Initiative
URL: https://www.brinknews.com/more-people-have-cell-phones-than-toilets/
Get ahead in a rapidly changing world. Sign up for our daily newsletter. Subscribe
​​