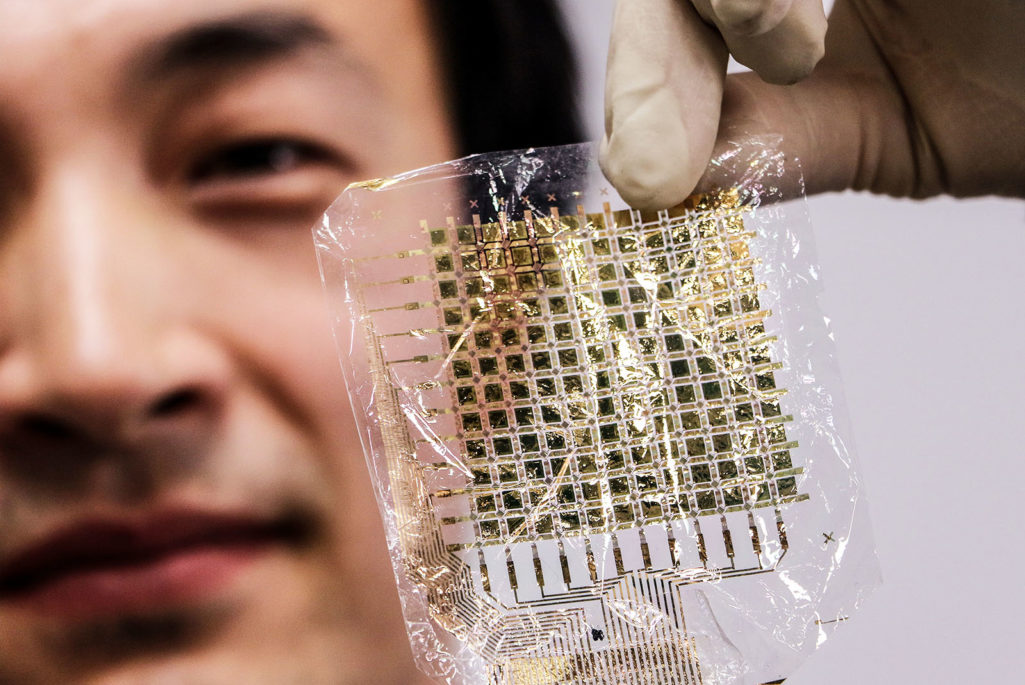 South Korean researcher Lee Sung-Won of Tokyo University's graduate school of engineering holding a super-thin bendable pressure sensor. The sensor contains carbon nanotubes that could someday be used in special gloves to detect breast lumps and make a digital record of the exam.The sheet is so flexible it can detect pressure changes accurately even when twisted like cloth.

Back in 2008, carbon nanotubes—exceptionally fine tubes made up of carbon atoms—were making headlines. A new study from the UK had just shown that, under some conditions, these long, slender fiber-like tubes could cause harm in mice in the same way that some asbestos fibers do.

As a collaborator in that study, I was, at the time, heavily involved in exploring the risks and benefits of novel nanoscale materials. Back then, there was intense interest in understanding how materials like this could be dangerous and how they might be made safer.

Fast forward to a few weeks ago, when carbon nanotubes were in the news again, but for a very different reason. This time, there was outrage not over potential risks, but because the artist Anish Kapoor had been given exclusive rights to a carbon nanotube-based pigment, claimed to be one of the blackest pigments ever made.

The worries that even nanotech proponents had in the early 2000s about possible health and environmental risks—and their impact on investor and consumer confidence—seem to have evaporated. So what’s changed?

The pigment at the center of the Kapoor story is a material called Vantablack S-VIS, developed by the British company Surrey NanoSystems. It’s a carbon nanotube-based spray paint so black that surfaces coated with it reflect next to no light.

The original Vantablack was a specialty carbon nanotube coating designed for use in space to reduce the amount of stray light entering space-based optical instruments. It was that distance —far removed from any people—that made Vantablack seem pretty safe. Whatever its toxicity, the chances of it getting into someone’s body were vanishingly small. It wasn’t nontoxic, but the risk of exposure was minuscule.

In contrast, Vantablack S-VIS is designed to be used where people might touch it, inhale it or even (unintentionally) ingest it.

To be clear, Vantablack S-VIS is not comparable to asbestos—the carbon nanotubes it relies on are too short and too tightly bound together to behave like needle-like asbestos fibers. Yet its combination of novelty, low density and high surface area, together with the possibility of human exposure, still raise serious risk questions.

For instance, as an expert in nanomaterial safety, I would want to know how readily the spray—or bits of material dislodged from surfaces—can be inhaled or otherwise get into the body; what these particles look like; what is known about how their size, shape, surface area, porosity and chemistry affect their ability to damage cells; whether they can act as “Trojan horses” and carry more toxic materials into the body and what happens when they get out into the environment.

These are all questions that are highly relevant to understanding whether a new material might be harmful if used inappropriately. And yet, they’re notably absent in media coverage around the Vantablack S-VIS. The original use was seemingly safe and got people wondering about impacts. The new use appears more risky and yet hasn’t started conversations around safety. What happened to public interest in possible nanotech risks?

The worries that even nanotech proponents had in the early 2000s about possible risks seem to have evaporated.

By 2008, the U.S. federal government was plowing nearly $60 million a year into researching the health and environmental impacts of nanotechnology. This year, U.S. federal agencies are proposing the investment of $105.4 million in research to understand and address potential health and environmental risks of nanotechnology. This is a massive 80 percent increase compared to eight years ago, and also reflects ongoing concerns that there’s still a lot we don’t know about the potential risks of purposely designed and engineered nanoscale materials.

It could be argued that maybe investment in nanotechnology safety research has achieved one of its original intentions: boosting public confidence in the safety of the technology. Yet ongoing research suggests that, even if public concerns have been allayed, privately, they are still very much alive.

I suspect the reason for lack of public interest is simple. It’s more likely that nanotechnology safety isn’t hitting the public radar because journalists and other commentators just don’t realize they should shining a spotlight on it.

With the U.S.’s current level of investment, it seems reasonable to assume there are many scientists across the country who know a thing or two about nanotechnology safety. And who, if confronted with an application designed to spray carbon nanotubes onto surfaces that might subsequently be touched, rubbed or scraped, might hesitate to give it an unqualified thumbs up.

Yet in the case of Vantablack S-VIS, there’s been a conspicuous absence of such nanotechnology safety experts in media coverage. This lack of engagement isn’t too surprising; publicly commenting on emerging topics is something we rarely train, or even encourage, our scientists to do.

And yet, where technologies are being commercialized and, at the same time, their safety is being researched, there’s a need for clear lines of communication between scientists, users, journalists and other influencers. Otherwise, how else are people to know what questions they should be asking and where the answers might lie?

In 2008, initiatives existed, such as those at the Center for Biological and Environmental Nanotechnology (CBEN) at Rice University and the Project on Emerging Nanotechnologies (PEN) at the Woodrow Wilson International Center for Scholars (where I served as science advisor), that took this role seriously. These and similar programs worked closely with journalists and others to ensure an informed public dialogue around the safe, responsible and beneficial uses of nanotechnology.

In 2016, there are no comparable programs, to my knowledge; both CBEN and PEN came to the end of their funding some years ago. This, I would argue, needs to change. Developers and consumers alike have a greater need than ever to know what they should be asking to ensure responsible nanotech products, and to avoid unanticipated harm to health and the environment.

Some of the onus here lies with scientists themselves to make appropriate connections with developers, consumers and others. But to do this, they need the support of the institutions they work in, as well as the organizations who fund them. This is not a new idea—there is, of course, a long and ongoing debate about how to ensure academic research can benefit ordinary people.

Yet, the fact remains that new technologies all too easily slip under the radar of critical public evaluation, simply because few people know what questions they should be asking about risks and benefits.

Talking publicly about what’s known and what isn’t about potential risks—and the questions that people might want to ask—goes beyond maintaining investor and consumer confidence, which, to be honest, depends more on a perception of safety rather than actual dealing with risk. Rather, it gets to the very heart of what it means to engage in socially responsible research and innovation.