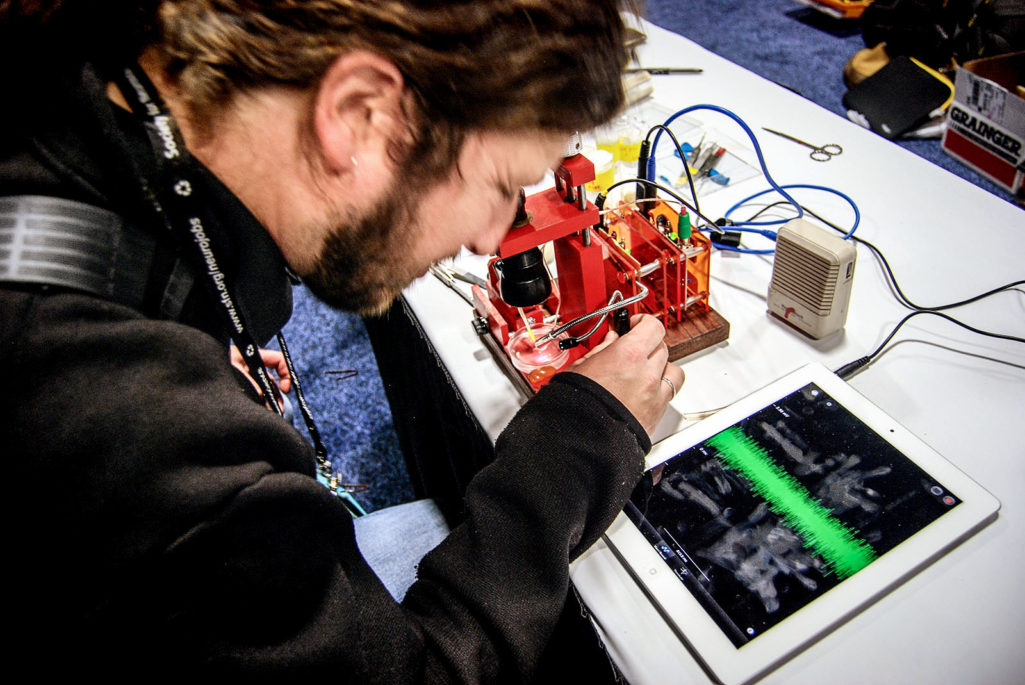 DIY optogenetics kit. Manufactured by Backyard Brains in collaboration with Stefan Pulver and demonstrated at the 41st annual meeting of the Society for Neuroscience in Washington, D.C., 2011.

From smart phones to cancer cures, we depend on technology innovation more now than at any point in human history. Yet in a cruel twist of irony, emerging technologies that could help improve lives and protect the environment may ultimately end up doing more harm than good. That is, unless new approaches to responsible innovation are developed and adopted.

On January 1, 1989, the Montreal Protocol came into effect in response to an emerging technology gone very wrong. Chlorofluorocarbons (CFCs) had all the hallmarks of an economically strong and environmentally safe technology. They were non-flammable, non-toxic and cheap to produce. And they were versatile, finding uses everywhere from aerosol propellants to refrigerants.

Yet the very properties that made CFCs so attractive held a hidden danger. Their stability allowed them to reach the stratosphere in sufficient quantities to interfere with the earth’s protective ozone layer. A promising technology turned out to be an environmental, social, and economic disaster.

Fortunately with CFCs, there was sufficient time between early warnings and subsequent actions to prevent even greater harm occurring. Yet with a growing proliferation of emerging technologies, time is a luxury that’s fast waning when it comes to spotting and correcting emergent risks.

From nanotechnology, synthetic biology and geoengineering, to autonomous drones, 3-D printing, neuromorphic computing, optogenetics and more, technology innovation is enabling an unprecedented ability to manipulate our environment and the organisms that inhabit it—including ourselves. The possibilities are immense. Unfortunately, so are the potential downsides.

These complex and interconnected technologies heighten the possibility for unexpected risks to emerge. Throw in an ossifying network of outdated regulations, and an increasingly influential—yet poorly informed—public, and the chance of seemingly benign technologies causing unanticipated harm begins to rise.

The more extreme possible risks of emerging technologies have already caught the attention of leading thinkers. For example, Elon Musk and Stephen Hawking have warned that advances in artificial intelligence could spell the end of humankind.

Admittedly, this is a far-fetched fear—in our lifetime at least. But it does reflect more plausible concerns associated with a growing number of closer-to-market technologies.

But worrying about what might go wrong is only half of the story.

Our future is dependent on new technologies. We live in an age fraught with challenges—cancer still kills; obesity is on the rise; diseases like malaria and dengue fever remain endemic in parts of the world; over a billion people lack access to basic sanitation; millions more need better access to food, water and energy. The stark reality is that we cannot afford to stifle the development of new technologies that can help address these and other issues.

Complex and interconnected technologies heighten the possibility for unexpected risks to emerge.

Stacking the Deck in Favor of Positive Social Outcomes

There are no easy answers here, especially as technology innovation outruns our ability to regulate the consequences. But there are ways in which innovators can begin to stack the deck toward the chances of emerging technologies having a net positive social, environmental and economic return on investment.

For instance, up-front consideration of future societal and environmental benefits and impacts of a technology can prevent costly course corrections. In this respect, the three pillars of sustainability—people, planet, profit—provide a sound framework for guiding early development decisions.

Of course, finding sustainability expertise around a just-invented technology is a tall order. Yet insights into potential liabilities of emerging technologies—and how to avoid them—can often be found in the unlikeliest of places.

Social scientists, regulators, members of the public, even non-government organizations and journalists, can often provide surprisingly deep insights into potential risk vulnerabilities and how they might be avoided. Engaging effectively with constituencies such as these can provide perspectives that are invaluable in avoiding costly mistakes.

Some of this cost may be defrayed through innovative partnerships. For example, academics may be willing trade insights on building risk resilience, for access to the inside track on technology trends. Partnering with social entrepreneurs could reduce risk vulnerability through aligning technology innovations with societal needs. And engaging effectively with consumers and other constituencies can provide early warnings of potential problems, together with insights on reducing the chance of unexpected risks.

Such options are part of the emerging area of Responsible Innovation—a growing field of research and practice that seeks to increase social, environmental and economic risk resilience around emerging technologies.

Responsible Innovation is still in its infancy. But as new technologies continue to be developed at an accelerating rate, it’s growing up fast. And it needs to. We don’t have the luxury of holding technology innovation back until we understand all the risks. Yet neither can we assume that we’ll continue to dodge unanticipated risks, or simply fudge our way through them.

This will not be easy. But it is essential if we are to reap the benefits of technology innovation, without creating a legacy of harm that ultimately negates the advantages it bestows.