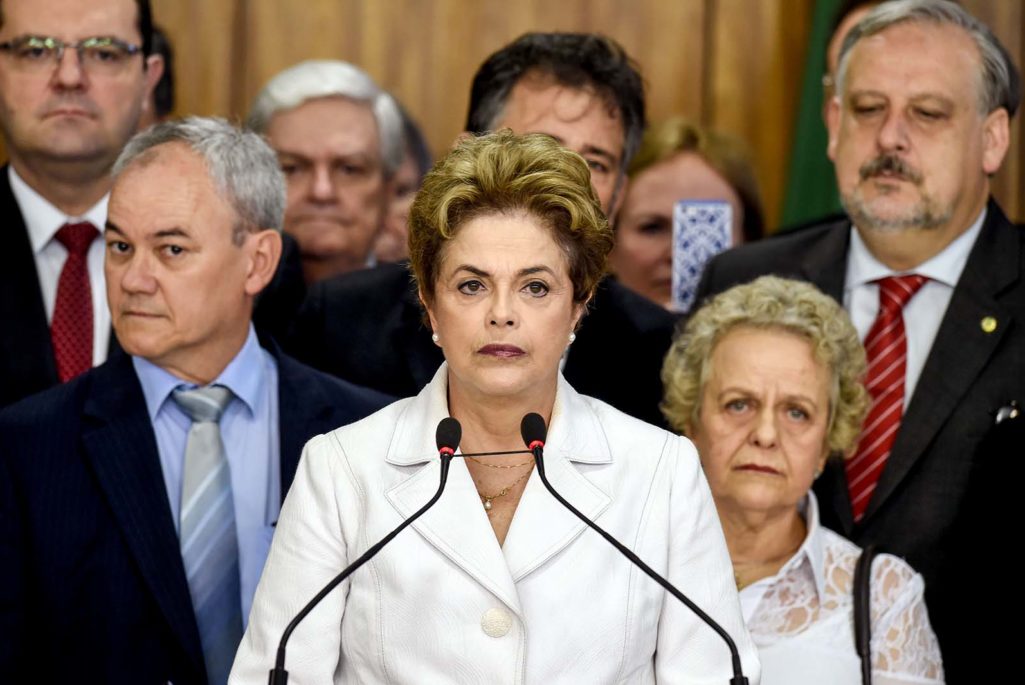 Brazil's now ousted President Dilma Rousseff makes a statement at the Planalto Palace in Brasilia on May 12, 2016.

Last week, in an often painful, sometimes raucous and occasionally tawdry impeachment trial, the Brazilian Senate found President Dilma Rousseff guilty of “crimes of responsibility” and removed her from the office. Her ouster opens a governance crisis and leaves the country adrift against the backdrop of a deep economic recession and the public in a quandary over its future.

Vice President Michel Temer, who had been serving as acting president for the past two months, was formally sworn in as Brazil’s new head of state. He will complete the remaining two years of Rousseff’s term.

Most Brazilians were happy with the results of the impeachment process. For the last year of her tenure, Rousseff’s approval ratings hovered around 10 percent in most polls.  Nonetheless, Rousseff herself, her supporters in Brazil and many observers elsewhere—including former U.S. Democratic presidential candidate Bernie Sanders and some 50 members of the U.S. Congress—call the impeachment a “legislative coup d’état,” claiming that her ouster violated Brazil’s constitution and left its democracy scarred.

Recalling Latin America’s long history of coups and military dictatorships, it’s hard to view the Rousseff impeachment as a coup. That was what Augusto Pinochet and the Chilean armed forces did in 1973 when they overthrew the democratically elected government of Salvador Allende and established a police state for the next 17 years. A coup was also what the armed forces did in BraziI in 1964 and in Argentina in 1976 and many times before. Then President Alberto Fujimori’s power grab in Peru in 1991 was rightly called a self-coup.

Rousseff’s impeachment broke no laws, nor was the constitution violated. To the contrary, the proceeding carefully adhered to all of the constitutional provisions related to impeachment. The process, moreover, was closely supervised throughout by Brazil’s highly respected judicial authorities. The Supreme Court rejected several earlier congressional attempts to start the impeachment of Rousseff, deciding that the charges were insufficient to proceed. Most of the members of the Supreme Court were appointed by Rousseff or by her predecessor and mentor, Luiz Inacio Lula da Silva—including the Court’s president, Ricardo Lewandowski, who presided over the Senate trial. There were, however, two serious failings that tainted Rousseff’s removal from office—and opened the way for the dubious claim that a “parliamentarian coup” had taken place.

Although approved by the Supreme Court, charges against Rousseff barely met the minimal criteria for impeachment.

First, although approved by the Supreme Court, the charges against Rousseff barely met the minimal criteria for impeachment and provided a rather flimsy basis for proceeding. Rousseff was accused of delaying repayments to state-controlled banks and using the funds for expenditures that had not been formally authorized by Congress. While considered “a crime of responsibility” for senior officials, it was not a criminal act subject to prosecution. Moreover, this sort of financial tampering has long been common practice in Brazil—although, during Rousseff’s tenure, the amounts involved were exceptionally large. Her actions, though, hardly seem egregious in the light of Brazil’s ongoing massive corruption scandals, which have siphoned off more than 10 billion dollars in public funds to finance political parties and have personally enriched other politicians and business leaders.

Therein lies the second problem with the president’s impeachment. The majority of legislators in both the lower house and the Senate who sat in judgment of Rousseff are themselves corrupt. Some 60 percent have either been officially charged or are under investigation for crimes such as bribery, electoral fraud, illegal deforestation and even kidnapping and homicide.

The impeachment process was initiated by the leader of the lower house, who faces a multitude of charges, including the theft and laundering of more than $40 million. He was recently relieved of his leadership responsibilities, but remains an influential member of Congress. The leader of the Senate is also being investigated on corruption charges, and so is President Temer, who has been barred from running for any public office because of illegal campaign contributions. By any standard, Rousseff emerges as far more honest than those who convicted her.

There are reasons to be uncomfortable with the impeachment process. It was not a coup and had all the appearances of being fully legal and constitutional, but, arguably, it was not completely fair and above board.

Governance Crisis Wouldn’t Have Been Averted on Opposite Vote

It is also true, however, that if Rousseff had defied expectations, won the impeachment battle and been restored to the presidency, Brazil’s governance crisis would likely have persisted and might have worsened. She was just not able to provide the leadership needed to resolve Brazil’s political impasse or reverse its economic course.

The Rousseff government has been floundering for months in the run-up to the impeachment process. She had lost majority support among the public, who wanted her replaced. She failed to gain the congressional assent for the reform measures needed to recharge Brazil’s moribund economy. She could not even count on the consistent backing of her Workers’ Party, who regularly sought to water down or defeat her economic policy proposals. If she had returned to power, the most important challenge for her government would have been precisely the task she was unable to perform prior to her impeachment: repair the economy.

It will not be easy for President Temer to govern either. He is not a popular figure. He was roundly booed at the opening of the Olympics in Rio de Janeiro, and declined to appear at the closing ceremony to avoid a similar reception. He commands no more support from the Brazilian public than his predecessor. For sure, he brings stronger political skills to the job, but his performance as acting president in the past two months has been mixed at best.

Temer started out badly, demonstrating insularity by appointing an all-male, all-white cabinet in arguably the most highly diverse nation in the world. Many of his ministers are enmeshed in corruptions scandals; three have already had to resign. Brazil’s economy has begun to show a few modest signs of improvement, but its precarious fiscal situation, the still feeble global economy and the slow growth of the country’s main economic partners are just some of the obstacles to a sustainable recovery.

Still, the Temer government does bring some advantages. He has assembled a first-class economic team that is highly regarded across much of the political spectrum and has succeeded already in boosting the confidence of Brazil’s largely disheartened business community.

The new president also now has the support of an ample majority in Congress, which should allow him to secure the timely approval of key economic measures, a challenge which had eluded Rousseff. The economy cannot be turned around quickly; it will take months to achieve a steady trajectory of growth, job creation and public investment.

Ordinary Brazilians may be tired of the country’s political battles and more willing now to accept a longer period of adjustment, but at some point, they will want results. Higher taxes, continuing austerity, high inflation and unemployment and poorly funded public services could eventually provoke a political backlash that undercuts the government.

October’s municipal elections will provide the first substantial (although still only partial) indicator, since Rousseff’s ouster, of the country’s political mood and the competitive strength of its 30 or so political parties.

The polling data is clear. Most Brazilians preferred new elections to the prospect of Temer serving out the remainder of Rousseff’s term, but that route was also fraught with problems. The constitution would have to modified, a process that could turn out to be a new source of political uncertainty and tension, and the list of viable candidates is discouraging. Former President Lula da Silva has been leading in the polls, but it now appears he will soon be put on trial for corruption and related crimes.

Other prospective candidates include two former presidential contenders who finished second and third to Rousseff in the 2014 election. Aecio Neves, however, may soon be in court facing corruption charges, while Marina Silva is widely considered ill-suited for the job.

None of the three political alternatives available to Brazil this year—keeping Rousseff in power, replacing her with Vice President Temer or convening new elections—was very attractive.  Although installed as president by a controversial impeachment process, Temer will almost surely hold office for the next 28 months until a new president is inaugurated on Jan. 1, 2019. He starts off with a weak hand, but there is no question that he is the legitimate head of state—legally installed, in accord with the nation’s constitution. It will surely be accepted as such by most Latin American governments and the rest of the world.

Temer is already scheduled to fly to Beijing on Sunday. There is nothing special other countries can or should do at this time other than extend its congratulations to the new president.