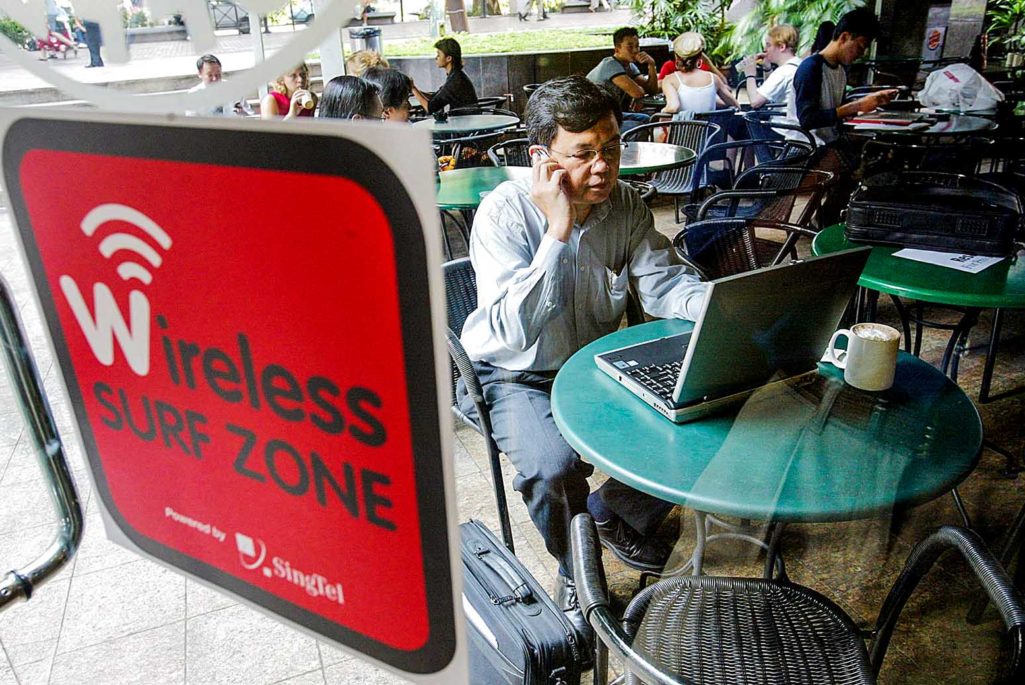 A man tries out the new wireless internet services at a cafe along Orchard Road in 2002. Its Wireless@SG program was launched in 2006, which provides free Internet access in public areas, and now reportedly has more than 10,000 hotspots across the city.

Singapore and Sweden lead the world in terms of Internet inclusivity, according to a recent report. The Inclusive Internet Index measures how effectively individual countries have adopted Internet usage and the benefits derived from it. It also takes into account the ease of access that people have to a high quality and affordable Internet connection. Other developed economies in the Asia-Pacific region such as Japan, South Korea and Australia, are ranked 5, 6 and 11 respectively. Asia-Pacific countries that rank poorly include the low-income economies of Nepal (ranked 56), Cambodia (55), Myanmar (54) and Pakistan (53).

The index is based on four pillars that determine whether users benefit from Internet usage. They comprise availability, affordability, readiness and relevance. Availability. The availability aspect primarily entails ease of access to the Internet. Availability attracts more users and it is dependent on infrastructure. Many developing countries that lack a fixed-line infrastructure to deliver high speed Internet have resorted to installing wide mobile networks. India, however, is investing in broadband and Wi-Fi capability to ensure better quality and ease of access. Singapore tops the availability rankings, owing largely to initiatives taken by the government. For example, the report says that Singapore is “arguably a standard-bearer” of public-access Wi-Fi with the launch of its Wireless@SG program in 2006, which provides free Internet access in public areas and now reportedly has more than 10,000 hotspots across the city.

Affordability. Internet access remains unaffordable for most income groups in many developing countries. The UN-defined threshold for affordability is 5 percent of average national monthly income and efforts are underway to reduce it to 2 percent. Competition among Internet service providers ensures lower access prices, which in turn lead to a higher rate of adoption. Although Singapore ranks first overall in the inclusivity index, it does not fare well in terms of affordability (ranked 13) and is outperformed by both Japan and South Korea. Indonesia ranks highest for affordability among developing Asia-Pacific economies, followed by India, Malaysia, Thailand and Vietnam respectively.

Relevance. This entails how effectively Internet usage is applicable to users’ lives. It is dependent on language and format of presentation; irrelevance in such aspects will result in limited adoption. For low-income groups especially, relevant content may serve as encouragement to adopt Internet usage. Japan ranks highest in this area, followed by South Korea. The presence of both relevant and local content in Vietnam (18) and Malaysia (19) are responsible for their strong showing. China, Thailand and India have also been successful in localizing user interfaces and content on websites and devices and are expected to see gains in this space.

Readiness. This relates to the ability or skill of users to safely access online content and services. Included in its purview is also the degree of access that women have to the Internet, for example. Basic reading and writing literacy is an impediment to Internet usage in many developing countries, while others are unaware of the many benefits that the Internet offers. The report also observes that there is a significant gender gap in Internet adoption, with men far outpacing women. Globally, Malaysia ranks highest in readiness, partly due to its successful adoption of digital policy. Among Asia-Pacific economies, Malaysia is followed by Japan, Korea, Kazakhstan and Taiwan, all of which appear in the top 10.

Policy development and its successful implementation are key to improving accessibility, particularly in middle- and lower-income countries, the report said. Additionally, the report highlights factors related to policy that can help improve inclusion, and these include: better fixed infrastructure for improved connectivity; a change in men’s attitudes to help bring more women online, particularly in rural areas in low-income countries where the digital gender gap is highest; and improved training for teachers and students.

Finally, it recommends that in trying to improve inclusion, “stakeholders need to consider the range of socioeconomic, cultural, demographic, linguistic and other factors that contribute to inclusion.”

Cliff Majersik Senior Advisor to the Institute for Market Transformation
URL: https://www.brinknews.com/singapore-sweden-top-the-global-inclusive-internet-index/
Get ahead in a rapidly changing world. Sign up for our daily newsletter. Subscribe
​​