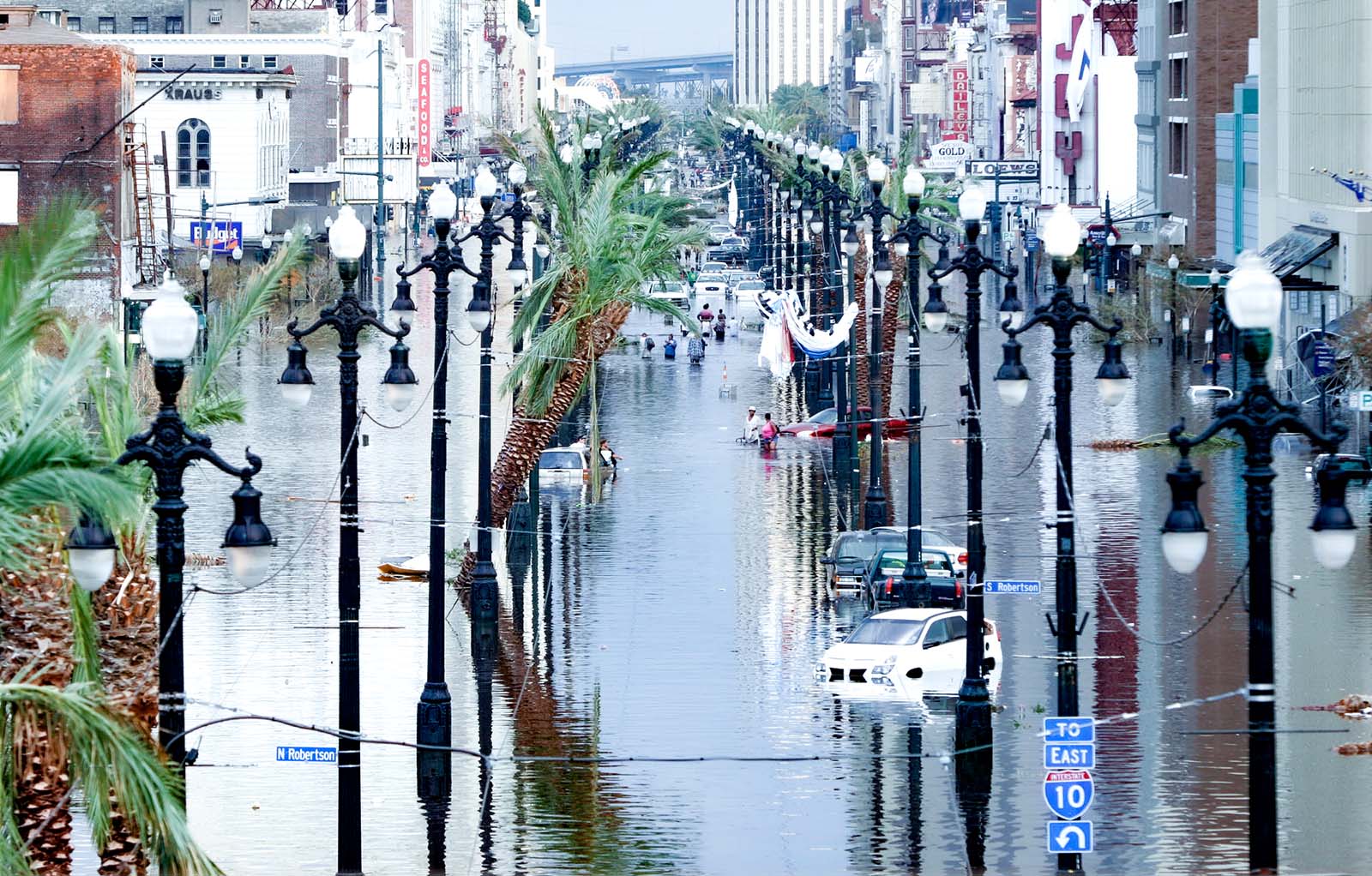 Canal Street is flooded a day after Hurricane Katrina blew through in New Orleans, Louisiana. Levee and floodwall failures led to more than 1,800 fatalities not only from damages in Louisiana, but also in Alabama, Florida, Georgia and Mississippi.

Natural disasters are being recorded more frequently than ever before. “Since 1970, the number of disasters worldwide has more than quadrupled to around 400 a year,” and “there are six times more hydrological events now than in 1980,” according to The Economist. Since 2000, losses, both insured and uninsured, have spiked, according to the Insurance Information Institute.

Here are the top 10 global natural disasters, ranked by financial cost, since 2000.

An earthquake, magnitude 6.3, shook the city of Christchurch and the town of Lyttelton in New Zealand in 2011. It set off a series of collapsing buildings, falling bricks, crumbling walls and tumbling boulders, resulting in 185 deaths. “Irreparable damage led to the demolition of several thousand homes, and large tracts of suburban land were subsequently abandoned,” according to New Zealand’s government.

In 2012, “nearly two-thirds (65.45%) of the continental U.S. was covered by drought,” according to Brad R. Rippey of the USDA. Losses were largely agricultural: Crops were lost in part due to a lack of soil moisture, and livestock were lost, as “76% of the domestic cattle inventory was located in drought at the height of the 2012 dry spell,” writes Mr. Rippey. He also notes that “U.S. corn yield fell in three consecutive years for the first time since 1928-1930 and for only the third time on record.”

Thailand’s flooding in 2011 was caused by record rainfall during monsoon season — “the highest in the country’s 61-year precipitation record,” according to the Royal Meteorological Society. “Insufficient management of the main dams in Thailand led to overtopping and to the release of yet more water, further exacerbating the flooding, which caused extensive damage … to homes, sites of historical interest and to industrial estates run by large multinational companies (including Sony, Honda and Toyota),” the society also noted. Sixty-five of the 77 provinces were affected by the flood, and eight were declared flood disaster zones.

Hurricane Irma “made seven landfalls, four of which occurred as a Category 5 hurricane across the northern Caribbean Islands,” according to NOAA. Hurricane Irma made landfall in the Florida Keys as a Category 4 hurricane and in the southwestern region of the state at a Category 3. The hurricane “affected at least nine U.S. states, turning streets into rivers, ripping down power lines, uprooting trees and cutting off coastal communities,” according to a CNN article, which also notes that it was “the strongest Atlantic basin hurricane ever recorded outside the Gulf of Mexico and the Caribbean Sea.”

In 2012, in anticipation of Hurricane Sandy, numerous states along the East Coast of the U.S. declared states of emergency, closed offices and shut down transportation systems. Just before making landfall in New Jersey, Hurricane Sandy weakened to a post-tropical cyclone, however, the superstorm caused the “greatest number of U.S. direct fatalities related to a tropical cyclone outside of the southern states since Hurricane Agnes in 1972,” according to NOAA.

In 2017, Hurricane Maria hit Dominica as a Category 5 storm. The storm transformed to a Category 4 hurricane before it hit Puerto Rico. The entire island of Puerto Rico lost electricity, making it the “largest blackout in U.S. history and the second-largest blackout in the world,” according to Vox. It also took nearly a year to restore power to all residents. Whether or not the U.S. government would provide disaster relief and how much became a major political controversy after the hurricane, delaying the island’s recovery.

In 2008, Sichuan, a province in southwestern China, registered a 7.9 magnitude earthquake. “Landslides, power failures and fallen mobile phone towers left much of the affected area cut off from the outside world and limited information about the damage,” according to The New York Times. The earthquake killed nearly 90,000 people, including at least 5,000 students, some of whom were trapped in their schools, and damaged more than 12,000 schools in Sichuan.

In 2017, Hurricane Harvey, a Category 4 storm, hit the Louisiana-Texas border. The storm broke the U.S. record for rainfall from a single storm, and numerous “known human carcinogens were among the dozens of tons of industrial toxic substances released into surrounding neighborhoods and waterways following Harvey’s torrential rains,” according to the Associated Press. Hurricanes Harvey, Irma and Maria all occurred in the same year and contributed to 2017 being “the most expensive year on record for disasters,” according to The Texas Tribune.

In 2005, Hurricane Katrina, a Category 3 storm, hit New Orleans, Louisiana. Levee and floodwall failures led to more than 1,800 fatalities not only from damages in Louisiana, but also in Alabama, Florida, Georgia and Mississippi. The event also set off a series of 59 tornadoes across the span of just six days that tore across nine states from the Gulf Coast to the Ohio Valley.

In 2011, Tohoku, Japan, experienced a magnitude 9 earthquake, followed by a tsunami and hundreds of aftershocks. The disaster resulted in extensive damages, including to infrastructure, agricultural land and housing: “The number of houses considered to have been totally destroyed or half destroyed were 128,530 and 240,332, respectively,” according to an analysis of the damages. The earthquake also led to the Fukushima Daiichi nuclear disaster, exposing power plant workers, disaster responders and the general public to radiation: “The appearance of increased levels of radiation [were identified] in some local food and water supplies,” after the nuclear disaster, according to Britannica.

Carolina Klint Risk Management Leader, Continental Europe at Marsh
URL: https://www.brinknews.com/the-10-most-costly-natural-disasters-of-the-century/
Get ahead in a rapidly changing world. Sign up for our daily newsletter. Subscribe
​​