The $500 Billion Global Water Crisis: Asia in the Crosshairs 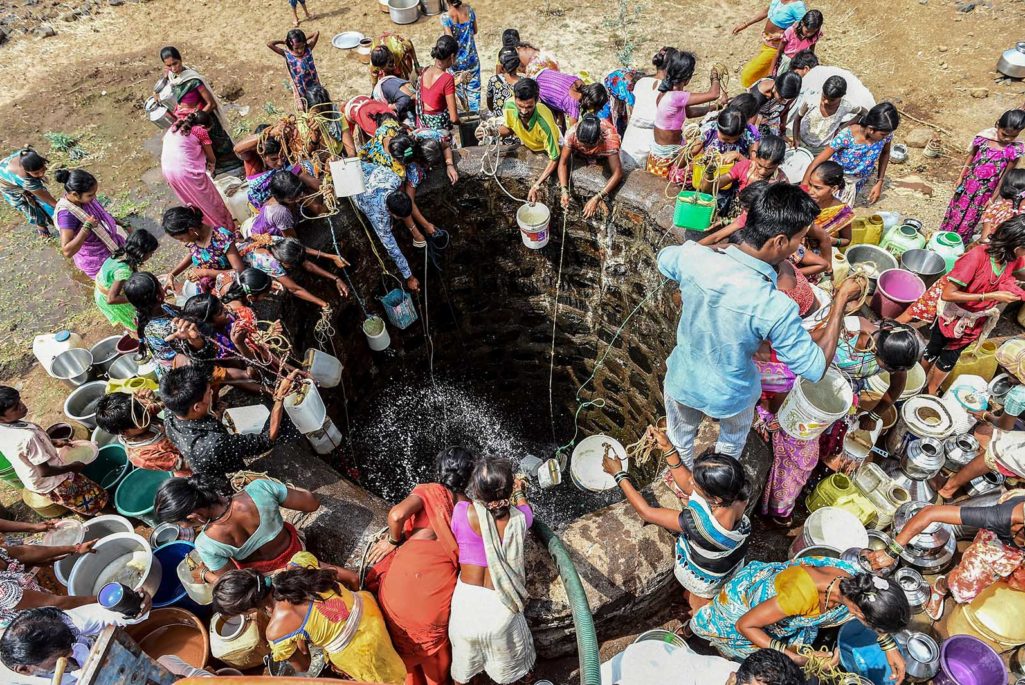 Indian villagers throw containers attached to ropes into a well to collect their daily supply of potable water after a tanker made its daily delivery at Shahapur, some 130 km southwest of Mumbai, on May 13, 2016. India is officially in the grip of its worst water crisis in years, with the government saying that about 330 million people, or a quarter of the population, are suffering from drought.

Water insecurity costs the world 1 percent or more of its GDP—amounting to $500 billion—annually, and the problem is particularly pronounced in Asia where 1.7 billion people still don’t have access to basic sanitation, hundreds of millions don’t have clean water to drink and droughts and floods ravage communities year after year.

The recently published Asian Water Development Outlook 2016 by the Asian Development Bank (ADB) throws light on these staggering numbers that illustrate how acute the problem is in Asia. For example, by 2050, 3.4 billion people could be living in water-stressed areas owing to overexploited groundwater, growing populations and climate variability.

By 2050, Asia’s demand for water is projected to increase by 55 percent—owing to increased domestic, industrial and agricultural demand. Food production in developing countries will need to double by 2050, putting a severe strain on water resources, the report said.

What makes the region particularly vulnerable is the fact that it is home to 50 percent of the world’s poor. Compounding worries are factors such as poor governance, weak institutional capacity, increasing climate variability and water-related disasters.

“[The Asia-Pacific area] remains the world’s most vulnerable region to water insecurity and cannot sustain its recent economic growth without addressing this issue,” said ADB Vice President for Knowledge Management and Sustainable Development, Bambang Susantono. “Meeting the region’s socioeconomic challenges and achieving Sustainable Development Goal 6 on water will require bridging the gap in provision of water services between rich and poor in urban areas, and between rural and urban areas.” The report assessed water security across five main areas—household access, economic viability, urban services, restoring rivers and ecosystems, and resilience to water-related disasters. It found that 29 of the 49 countries assessed are still water insecure. Although the number has decreased from 38 since 2013, significantly more needs to be done, particularly in the South Asian region which performs poorly across all parameters. On the other hand, countries such as Japan, Australia and New Zealand fare well in terms of water security, followed by countries in East Asia.

One of the major concerns in the region is wastewater treatment. Almost 80 percent of wastewater in Asia is discharged into water bodies without undergoing treatment. For example, Indonesia only treats 14 percent of its wastewater, Philippines 10 percent, India 9 percent, and Vietnam an abysmal 4 percent. The resultant impact on health and the ecosystem can be worrisome.

According to the ADB, while the lack of wealth is a factor contributing to water insecurity in parts of Asia, there are sufficient examples in the region illustrating that wealth does not necessarily determine water security. “Rather, the Republic of Korea, Malaysia, Singapore and Thailand were able to make major progress in drinking water and sanitation while they were still relatively poor countries, proving that this is possible,” the report said.