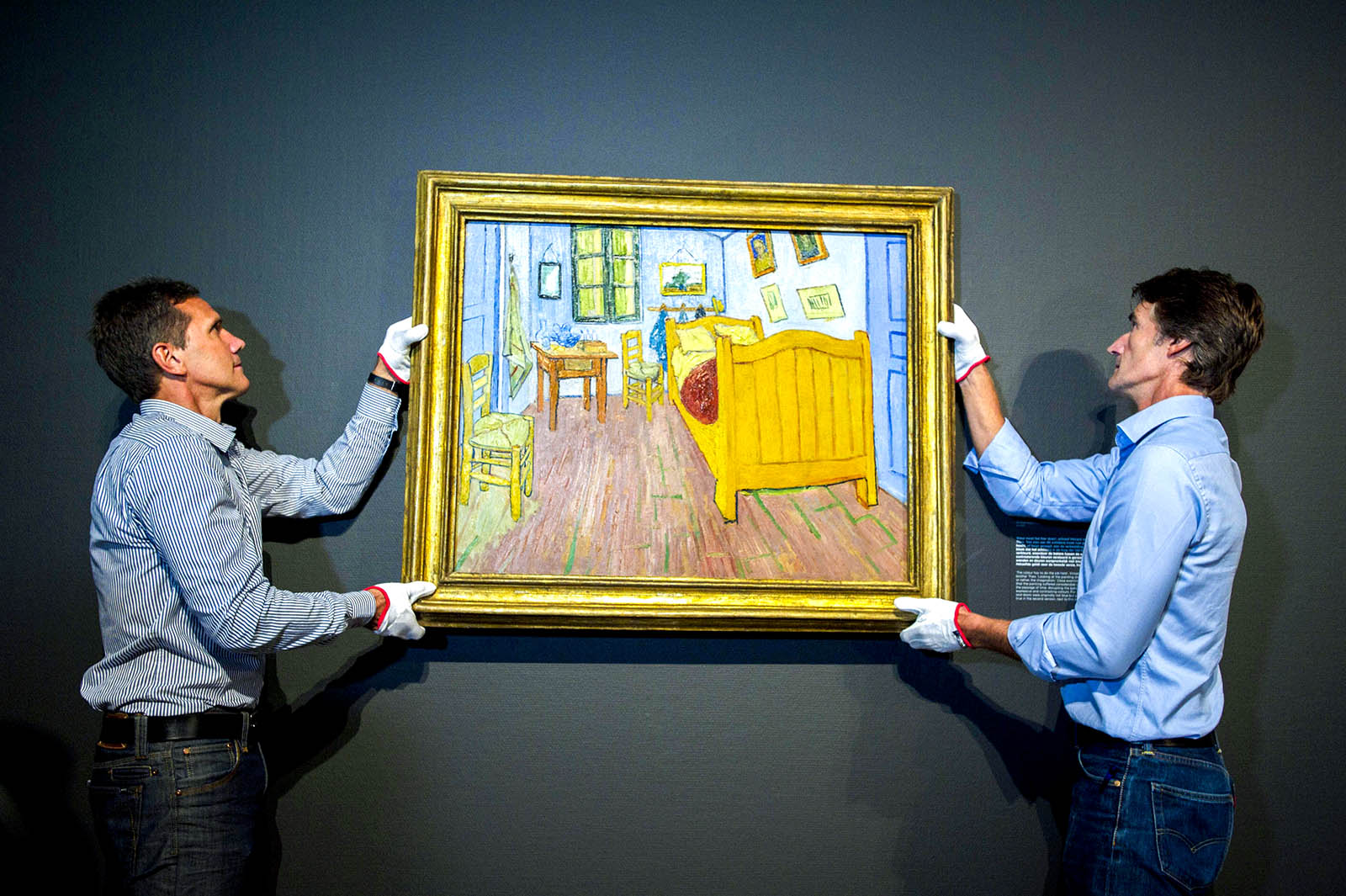 Employees hang the second version of the painting "The Bedroom" by Vincent van Gogh at the Van Gogh Museum in Amsterdam. A researcher looked into when artists and scientists produced their best works and found that they were likely to be clustered together.

In 1905, Albert Einstein was on a roll. Between March and June of that year—which scientists refer to as his “annus mirabilis,” or miracle year—the legendary physicist finished three different papers that would radically change how we think about space and time and pave the way for quantum physics.

“And that’s not even getting into the summer,” marvels Dashun Wang, an associate professor of management and organizations at the Kellogg School of Management.

To Mr. Wang, Einstein’s big year posed a puzzle. In a previous study looking at the careers of more than 10,000 scientists, Mr. Wang found that the timing of a researcher’s most influential paper was completely random—it was equally likely to come at any given year in their career, be it the beginning, middle, or end. But the concept of a miracle year seemed to challenge that conclusion.

“What are the odds, if everything is random?” Mr. Wang wondered.

In a new paper, Mr. Wang investigates whether “hot-streak” periods like Einstein’s are more than just a lucky coincidence—in science and in other fields as well. He teamed up with visiting student Lu Liu and Kellogg post-doctoral student Yang Wang, as well as Chaoming Song of the University of Miami, Roberta Sinatra of Central European University, and Lee Giles of Pennsylvania State University.

Looking at the career histories of thousands of scientists, artists, and film directors, the team found evidence that hot streaks are both real and ubiquitous, with virtually everyone experiencing one at some point in their career. While the timing of an individual’s greatest successes is indeed random, their top hits are highly likely to appear in close proximity.

And while more research is needed to determine what causes these bursts of genius, Mr. Wang says that the findings shed important new light on the patterns underlying success in all fields and could be used to improve decisions about tenure, promotions, and hiring.

Mr. Wang nicknamed his earlier paper on the timing of scientific successes “the hope project.” By demonstrating that a scientist’s most-cited paper was equally likely to appear in any given year, his findings refuted the conventional wisdom that researchers in their 50s or 60s were past their prime.

Working with Ms. Liu, a Ph.D. student at Kellogg, Mr. Wang began to design an experiment. The idea: “Let’s not just focus on the biggest hit, but let’s also look at the second-biggest hit and the third-biggest hit,” he explains. Their goal was to determine whether there was some kind of statistically meaningful pattern in the timing of one’s greatest achievements.

Using Google Scholar and Web of Science, Mr. Wang and Ms. Liu obtained data on research papers published by more than 20,000 scientists, which included the number of citations each paper received in its first ten years.

Then they decided to expand the analysis beyond academia. “We realized, ‘Gee, if this happens, it might be in all different kinds of careers,’” Mr. Wang says.

That idea was inspired by Alejandro González Iñárritu, the director of Birdman and The Revenant, explains Mr. Wang. “He won two Oscars back-to-back for best director. And that’s where I realized, this is not just scientists. This story’s much much bigger.”

Everyone experiences a career hot streak. Now, we need to find ways to identify and nurture individuals with long-lasting impact.

So they collected data on the careers of artists and film directors. To gauge success, they obtained the auction prices of artworks produced by 3,480 painters, sculptors, and other artists. And they combed film database IMDb for the career histories of 6,233 directors, using the IMDb ratings to approximate the success.

(Relative) Timing Is Everything

At first, what the researchers found seemed to confirm Mr. Wang’s earlier conclusion: Taken individually, each of an artist’s three most expensive artworks, a director’s three top-rated movies, and a scientist’s three most-cited publications appeared to come at completely unpredictable points in that person’s career.

“It looks like everything’s just random, a lottery all the way,” says Mr. Wang. “But really, the puzzle started to crack when we looked at, ‘What about their relative timing?’”

The researchers calculated how far apart an individual’s top-three hits appeared from one another. Then they ran a simulation that randomized the order in which each work occurred during an individual’s career and again calculated how far apart their top-three works appeared. If the hot streak was a myth, then the hits in the real data should not be any closer together than in the randomized data.

But that was not what they found. It turned out, an individual’s top-two works were roughly 50 percent more likely to occur back-to-back than sheer chance would dictate. Similarly, an individual’s second- and third-best works, and their first- and third-best works, were unusually likely to be clustered together. In one year alone, for example, Vincent Van Gogh produced the paintings The Yellow House, Van Gogh’s Chair, Bedroom in Arles, The Night Café, Café Terrace at Night, Starry Night Over the Rhone, and Still Life: Vase with Twelve Sunflowers.

Drilling down into the data, the researchers observed that most individuals experienced at least one hot-streak period. While some lucky people had multiple, the majority of the population had exactly one. The length of the hot streak varied depending on the career, with artists’ most frequently lasting around 5.7 years, directors’ lasting 5.2, and scientists’ lasting 3.7.

Furthermore, those whose work had a smaller average impact (lower citation counts, auction prices, and ratings) in their non-hot-streak days saw a larger relative boost during their hot-streak period.

The authors suspected that there might be a simple explanation for the hot streaks across disciplines: productivity. If a person happened to produce more movies, art, or scientific papers during a certain period, it would make sense that their best works clustered together during that period, simply because they had more chances to create a hit.

However, the authors found no perceptible change in productivity during hot streaks.

Mr. Wang hopes to look more closely in future research at what causes a hot streak to begin and end. But he emphasizes that the current results are meaningful on their own. “It doesn’t matter what drives the phenomenon—the phenomenon’s there,” he says.

The importance of that phenomenon comes through in one of the authors’ final findings: When their statistical models did not intentionally account for hot streaks, they systematically underestimated how successful a person’s career would be overall.

“Because what you produce during a hot streak is substantially better, your hot-streak period fundamentally determines your entire career’s impact,” Mr. Wang says.

The study could change how we think about up-and-coming talent. While Mr. Wang cautions against overinterpreting the results—“Imagine a person goes to a tenure committee and says, ‘Just give me two more years, my hot streak is coming!’ That’s going to be laughable”—he does believe that tenure committees and recruiters overlook hot streaks at their own peril. “We need to think about different ways and policies for us to identify and nurture individuals with long-lasting impact.”

If Mr. Wang thinks of his earlier research as his hope project, how does he feel now, knowing that a few years of rapid-fire successes may define his own career as a researcher?

“It’s essentially doubled my hope,” he says, since almost everybody gets one streak, and there is no predicting when it might arrive.

This piece first appeared in Kellogg Insight, from the Kellogg School of Management.