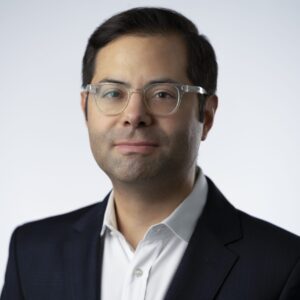 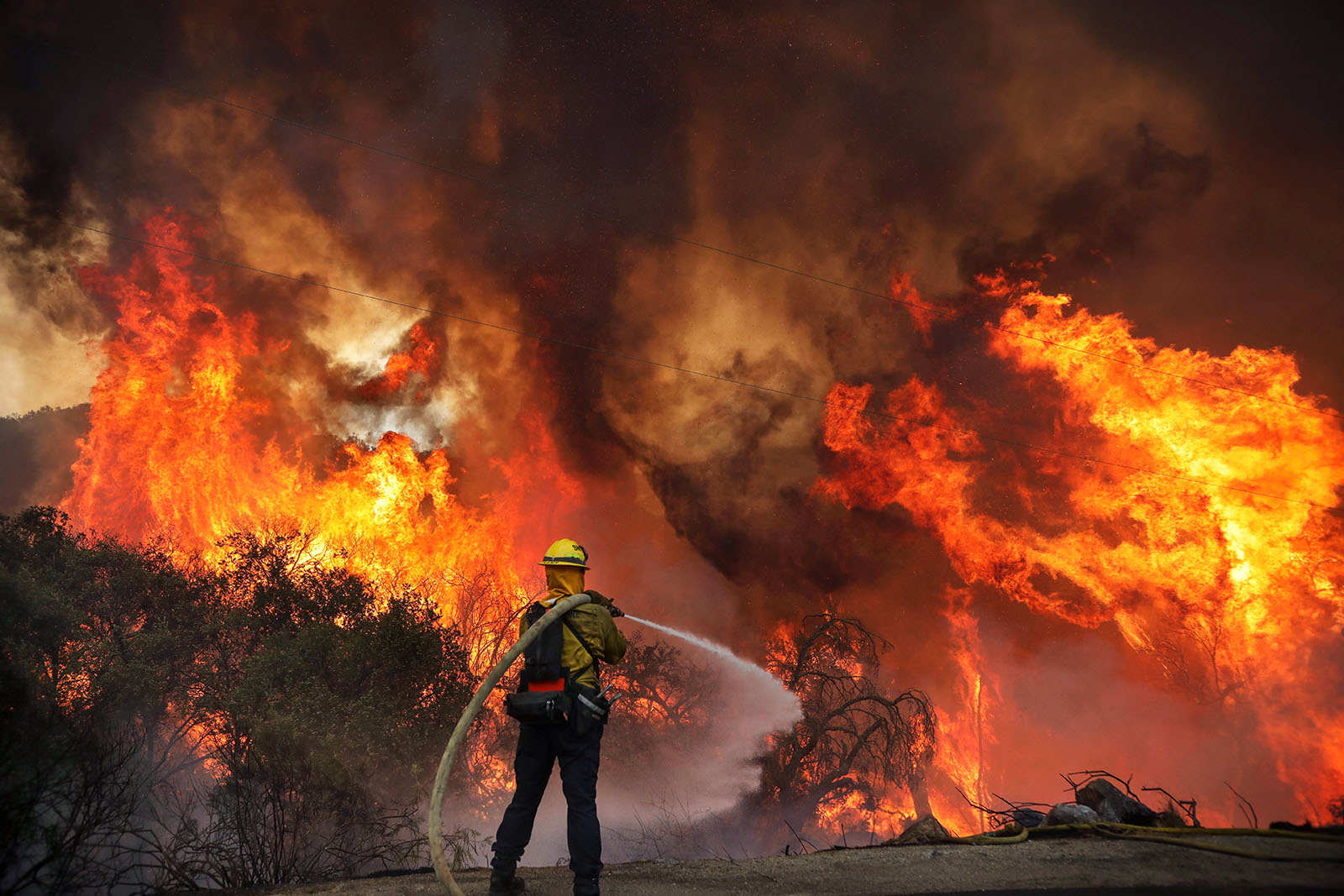 Firefighters battle a brush fire during the Valley Fire in Jamul, California on September 6, 2020. Financial markets have yet to fully internalize that the impacts of climate change are already happening.

The report by the bipartisan Commodity Future Trading Commission (CFTC) lays out how escalating risks for insurance, mortgage and bond markets could lead to a breakdown in markets and much higher prices for everything from insurance to food.

In the first of three pieces about the CFTC report, Leonardo Martinez-Diaz, the Global Director of the Sustainable Finance Center at the World Resources Institute, and a lead author of the report, spoke to BRINK about the consequences of financial markets not pricing for climate change.

LEONARDO MARTINEZ-DIAZ: On the whole, markets have yet to fully internalize that the impacts of climate change are already happening. They’re manifesting in the world of real assets: the destruction of property because of hurricanes and floods, destruction of assets because of wildfires, disruption of economic activity. That’s happening all across the U.S. and, indeed, around the world.

What is not quite happening yet is a translation of those risks and impacts into asset prices. We see it here and there in isolated episodes. But as we point out in the report, markets do not yet appear to be systematically pricing in climate risk, both in terms of physical impacts and transition impacts.

BRINK: If they’re not passing the risk on in terms of pricing, that means someone must be holding onto this risk. So where is the risk currently residing in the financial markets?

MARTINEZ-DIAZ: So far, most of that risk is being cushioned by shock absorbers — we talk about this at the end of chapter three. Basically the government, which in many cases act as an insurer of last resort, is absorbing a good part of the losses through programs like crop insurance, flood insurance and disaster assistance to states and cities in the aftermath of disasters.

In other cases, it’s private insurance that is absorbing losses. Those insurers have, in many cases, not yet made disruptive decisions such as greatly increasing their premiums or pulling out of the market, changes that would then trigger this larger reappraisal of risk.

In other cases, the risk is being deliberately or accidentally toned down. You see that reflected in outdated flood maps, or you see some opacity in the market in terms of firms’ exposure to high-carbon assets and what could happen if the value of those assets were to drop abruptly. So it’s a mix of shock absorbers taking on the losses, and therefore sparing the rest of the market from dealing with them, and also an incomplete reflection of the scale and scope of these risks in asset prices.

Rising Danger of a Sudden Adjustment

BRINK: And what would it take for the markets to start pricing it fully?

MARTINEZ-DIAZ: Well, the answer is different for transition risk and physical risk. In the case of physical risk, I think what it’s going to take is two things. First, an understanding of the scale of these events. So far, folks have thought, “Well, extreme events are episodic, they are localized, they don’t spill over beyond very particular parts of the country, they’re not all coming at the same time. The system can therefore handle them.” That assumption is beginning to break down, as we see multiple very large scale events happening simultaneously or near-simultaneously.

The other wake-up call involves the shock absorbers: How much can the government and private insurance markets really absorb? As we say in the report, if these shock absorbers were to be called into question, then there’d be a very abrupt wake-up call for the markets. That’s exactly the kind of abrupt adjustment that we’re trying to avoid, by getting smart about the challenge earlier, while there is still time.

In the case of transition risk, the wake-up call is the perception that policy, technology and consumer preferences are changing in a fundamental way. For a long time after the failure of cap and trade in the U.S., there was a sense that we were very far from any real possibility of major policy change.

But increasingly, people are beginning to appreciate that policy and technological shifts are more likely than ever, and that we may be nearing a tipping point in terms of climate politics and policy.

Climate risks are not going to bring down the financial system in one blow, but the weakening of these institutions could certainly disrupt livelihoods and communities in many parts of the country.

A Myriad of Sub-Systemic Shocks

MARTINEZ-DIAZ: One of the more original contributions this report made was drawing attention to the importance of what we call in the report “sub-systemic shocks.”

Financial regulators tend to focus on the kinds of risks that could bring down the whole financial system. But the report points out that climate risk can also confront regional banks, agriculture banks, community banks and smaller financial institutions, along with regional insurance markets.

These risks are not going to bring down the financial system in one blow, but the weakening of these institutions could certainly disrupt livelihoods and communities in many parts of the country. That’s not something that has received the attention that it requires.

BRINK: I suppose that points to one of the characteristics of climate change, which is that it’s a kind of rolling event, right?

MARTINEZ-DIAZ: That’s right. You could see the accumulation of these sub-systemic shocks as a systemic crisis in slow motion that, over time, could lead to a degradation in the capacity of the financial system to serve the economy. That’s a new way of thinking about the financial crisis, but one that we need to get smart about very quickly.

BRINK: One policy change would be to have proper pricing on carbon. That was one of the report’s main recommendations.

MARTINEZ-DIAZ: That’s correct. That’s in fact recommendation No. 1 in the report. There was no controversy in the subcommittee about recommending a carbon price that is in line with the Paris Agreement, and one that is fairly allocated in terms of cost.

BRINK: Do you see any sign of the sort of climate stress tests that we’ve been seeing in Europe happening in the U.S.?

MARTINEZ-DIAZ: Well, aside from the state of California, which has made good progress on stress tests for insurance companies, there has been very little done in practice. But financial institutions and regulators are beginning to recognize that it is useful to apply climate risk scenarios to balance sheets and portfolios to understand how these evolve over time. At the same time, banks don’t want the cost of having to do different kinds of stress tests in multiple jurisdictions where they do business — one in the United Kingdom and in the European Union, another in the U.S., and another in China, for example. They want to have a set of regulatory requirements that is as harmonized as possible, while at the same time being useful to their ability to manage climate risk.

Heading to a Tipping Point

BRINK: How important is the issue of disclosure in this?

MARTINEZ-DIAZ: Well, disclosure by itself is not enough. It’s important so that financial institutions understand the risks that they are directly and indirectly incurring from their activities downstream. It’s important for regulators to size the scope of the risks as well. But whether disclosure can be effective depends on the quality of that disclosure and on how extensive it is. And it depends on what investors do with the data that is disclosed.

If investors use the information to make decisions about how to allocate capital, then that — in combination with other policies — can really make a difference. But if we get stuck in a place where the data is very uneven and hard to compare and investors don’t actually use it to make decisions, then disclosure will not have advanced the mission.

BRINK: If I can ask you to look out one or two years, are you hopeful that these sorts of changes that you’ve just outlined will come to pass? Or are we heading for, as you say, an abrupt shift?

MARTINEZ-DIAZ: I think we are heading toward a tipping point. I think the amount of pressure that, especially, young generations are putting on their elders to pay attention to this challenge — the marches, the protests — combined with the obvious physical impacts that are of an historic nature, are all building up simultaneously in the U.S. and other countries.

When the politics align, then policy will begin to change fairly quickly. And hopefully that progress will be sufficiently fast so that we can avoid some of the very disruptive shifts warned about in the report. We can put in place a system that helps us get a handle on the emergency, and we have the authorities to do that now; that is the main message of the report.

Leonardo Martinez-Diaz is Global Director of the Sustainable Finance Center at the World Resources Institute (WRI) in Washington, D.C. Prior to joining WRI, Leonardo served in the Obama Administration as Deputy Assistant Secretary of the Treasury for Energy and Environment. In that capacity, he represented the U.S. on the governing boards of several multilateral climate and environmental funds, including the Green Climate Fund and the Global Environment Facility.

Erin Sikorsky Director of The Center for Climate and Security and the International Military Council on Climate and Security
URL: https://www.brinknews.com/why-financial-markets-arent-pricing-in-the-cost-of-climate-change-and-what-to-do-about-it/
Get ahead in a rapidly changing world. Sign up for our daily newsletter. Subscribe
​​