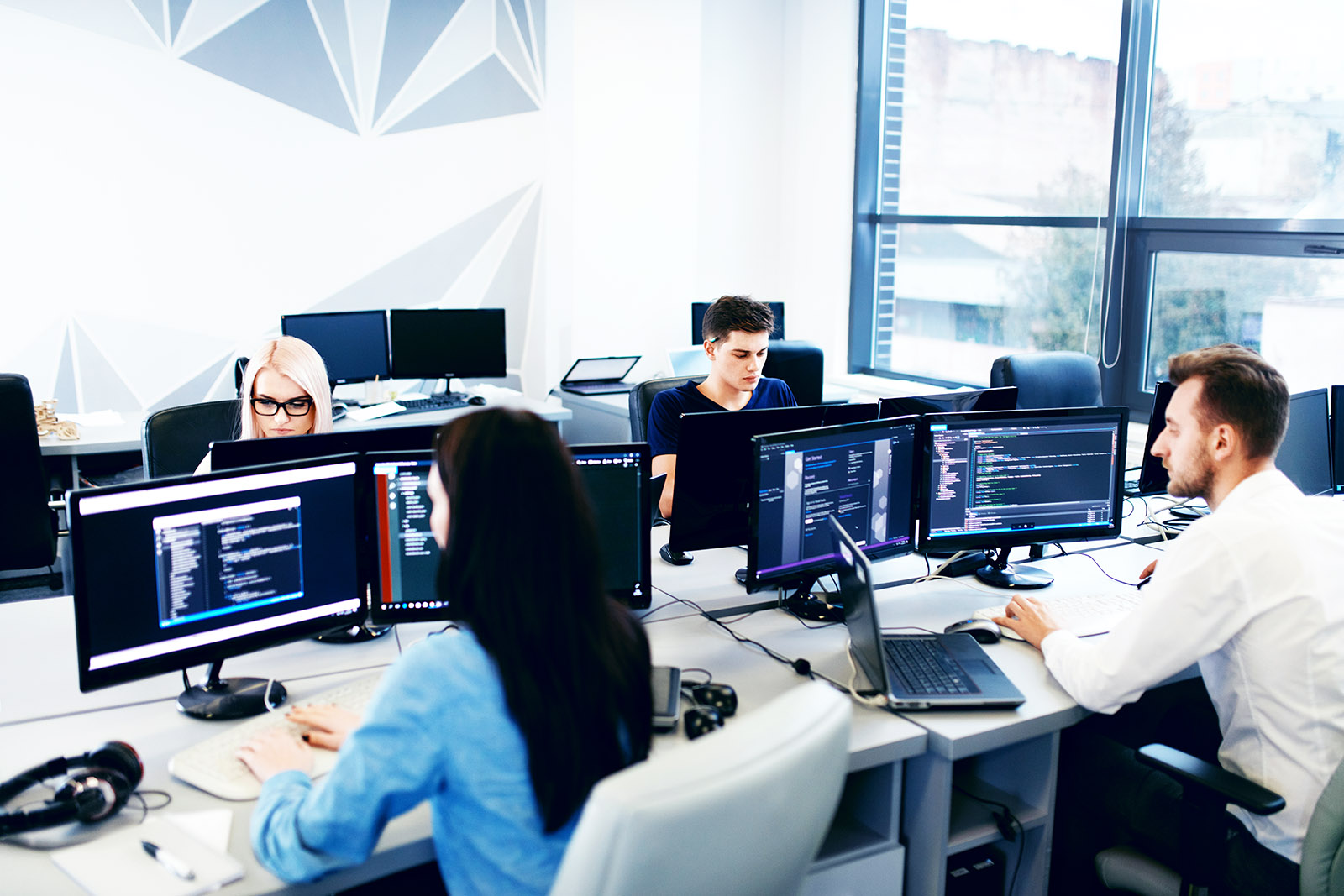 A group of programmers sitting in an office working on their computers. It is critical for organizations to create an environment that fosters unbiased thinking and addresses unconscious bias in hiring to help improve the opportunities for women in computing.

Women are seriously underrepresented in computing in many parts of the world. But their low participation is not universal. In fact, there are many examples that show otherwise. Consider, for instance, that:

In a new book called Cracking the Digital Ceiling: Women in Computing Around the World, we invited a number of authors to explore why women are so poorly represented in computing in the U.S. and what can be learned from other cultures.

What we’ve found is compelling evidence of the need to consider cultural factors, rather than innate potential, to understand what contributes to women’s participation in computing.

Showing what is happening elsewhere is important. Mazliza Othman and Rodziah Latih — two researchers featured in the book — found that 50% of undergraduates in computing at Malaysia’s top two universities are women. They conclude that young Malaysian men and women do not hold different perceptions of their ability to succeed in computer science.

Stories like these show that women can succeed in computing fields.

The Critical Importance of Culture

Men and women may not be as different as popular wisdom would have us believe. Indeed, research from neuroscience indicates that many differences we believe to be innate are, in fact, culturally created starting at an early age, as shown in research, for example, by Lin Bian, Lise Eliot, Cordelia Fine, and Alyssa Kersey.

At the same time, factors such as culture, race, socioeconomics, gender and ethnicity shape our individual identities; the “men are from Mars, women are from Venus” way of seeing the world is too simplistic.

We need to look at culture (and micro-cultures) to see if men and women receive the same opportunities, education, environment, encouragement, social expectations, family responsibilities and levels of advocacy.

In some countries, boys and girls do not grow up thinking that computing is just for boys. This is important because while boys and girls have the same intellectual potential, girls in Western culture often face obstacles and fewer opportunities to develop that potential in fields like computing.

Promoting the Economic Benefits of Careers in Technology

In the U.S., choosing computing can mean going against gender norms. In some cultures, choice is commonly influenced by economic factors such as the need to find employment, sometimes to help support families, and for economic independence.

Chapter author Monica Adya investigates women who have overcome a variety of odds with regard to their choice of, and success in, computing careers. Her analysis compares and contrasts the experiences of South Asian and American women in the United States workforce and shows that women can reap the benefits of technical careers.

Executive action at all levels — including from policymakers — is critical to improving the representation of women in computing.

By promoting the economic factors associated with computing careers, it’s possible to build a more positive image of computing, which can help increase broader interest and lessen negative images that might be perpetuated among parents and educators.

The Male-Dominated Mindset of Silicon Valley

One of the most stubborn obstacles to women’s participation in computing is the prevalence of stereotypes. Although stereotypes can vary from culture to culture, negative stereotypes about who is suited to the field of computing are particularly entrenched in Western thinking.

In the U.S., we tend to assume that we make our own choices and decisions. But this notion is complicated by stereotypes, which suggest that choosing to do computing can also mean going against gender norms.

In Sally Applin’s chapter, we hear how the Silicon Valley “template” risks having members of this male-dominated culture spread its hold on computing globally as people migrate to and from the many Silicon Valley-like venues. We all need to work on challenging computing stereotypes to make the field more inclusive of a wide range of people and personalities.

Some of the most common barriers to women’s participation in computing careers relate to what our authors call the “double work day,” in which women are expected to work in the lab or office while also having most of the responsibility for the home.

It is clear that men need to be more involved in the work day at home and be on board as allies with potential solutions — or remain part of the problem.

The Importance of Institutional Support

There is a growing body of research that points to the business case for diversity. Eileen Trauth argues in her chapter that workforce diversity has a positive impact on consumer products and services.

Executive action at all levels — including from policymakers — is critical to improving the representation of women in computing. Institutional support, such as administrative help, funding, resource allocation and an explicit leadership vision can signal the authorization to show that diversity is an essential part of the value system.

Organizations also need to create an environment that fosters unbiased thinking and addresses unconscious bias in hiring and retention considerations.

Cracking the Digital Ceiling speaks to educators in K-12 and post-secondary fields, administrators, companies working to address diversity and those ready to challenge preconceived notions about women in computing.

When we look to the future, we cannot ignore the potential talent of 50% of the population. Women need to be actively represented in computing.

Carol Frieze is director of Women@SCS and SCS4ALL in Carnegie Mellon’s School of Computer Science where she has worked on diversity and inclusion for the past 18 years.

Jeria Quesenberry is an associate teaching professor of Information Systems in the Dietrich College of Humanities and Social Sciences at Carnegie Mellon University. Her research interests are directed at the study of cultural influences on information technology students and professionals.