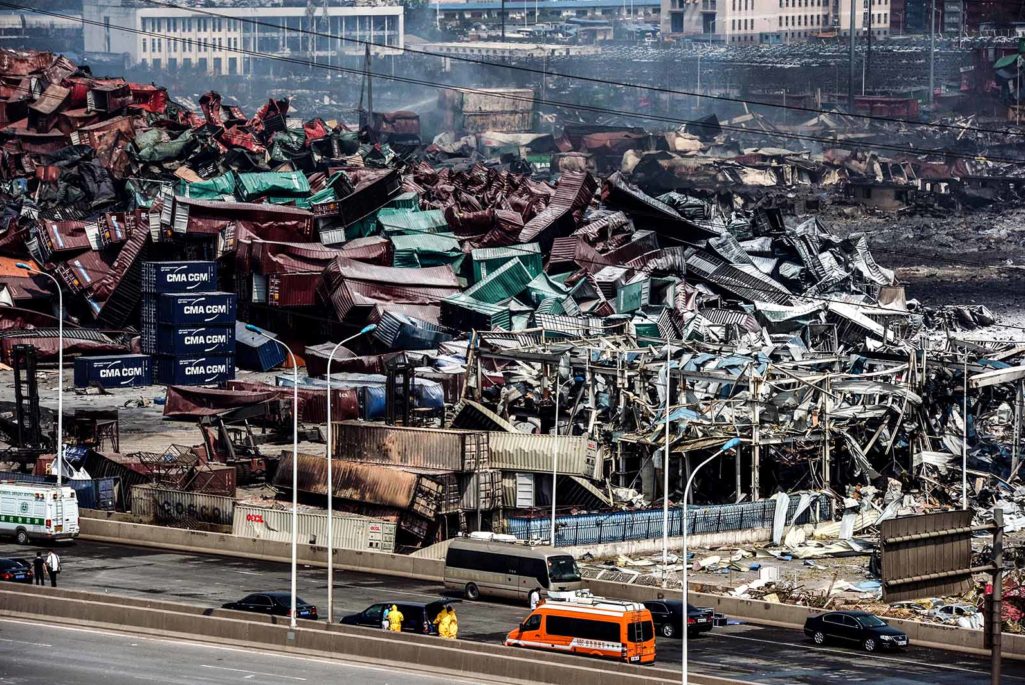 Recuse workers (foreground) approach mangled cargo containers and wreckage at the site of the explosions in the port city of Tianjin. The blast killed 112 and devastated a vast area.

Last year marked the lowest total insured catastrophe losses since 2009 and well below the $126 billion seen in 2011.

As a result, 2015 was a quiet one in terms of global significant insured losses, which totaled around $30.5 billion. Insured losses were below the 10-year and 5-year moving averages of around $49.7 billion and $62.6 billion, respectively.

The most impactful event of 2015 was the Port of Tianjin, China explosions in August. Two significant explosions occurred at a warehouse, resulting in estimated insured losses between $1.6 and $3.3 billion, according to the Guy Carpenter report following the event. This is likely to constitute one of the largest insured man-made losses to date in Asia. The impact of this event on insurers was very complex, with reinsurance implications affecting about 15 (re)insurers involving marine, property, automotive, liability and aviation sectors and further effects for contingent business interruption and business interruption exposures.

Natural events of the 2014-2015 winter season were characterized by a positive phase of the North Atlantic Oscillation, which is often associated with increased storms and greater storm severity in Northern Europe. The most significant events were Storms Mike and Niklas in March, which followed each other in close succession.

Other impactful events were the damaging wildfires in the Western United States, severe flood events in the Southern Plains and Carolinas and Typhoon Goni affecting Japan, the Philippines and the Korean Peninsula.

The summer of 2015 saw record U.S. wildfire activity. Some of the most impactful wildfires were the California Valley and Butte fires, collectively burning at least 2,775 structures and claiming more than 146,900 acres. Estimated insured losses for U.S. wildfire activity stand at about $960 million.

On Aug. 24, Typhoon Goni made landfall on the Japan island of Kyushu as a Category 3 on the Saffir-Simpson scale. Goni also rendered significant impacts to the Northern Mariana Islands, the Philippines, Taiwan and the Ryukyu Islands of Japan. Estimated insured losses from Typhoon Goni stand at around $1.16 billion.

One of the Strongest El Niños on Record

The year 2015 marked one of the strongest El Niño periods on record, characterized by warm waters in the East Pacific tropics. This was associated with record-setting tropical cyclone activity in the North Pacific basin, but relative quiet in the North Atlantic. Heavy Pacific typhoon activity affected Mainland China, Japan, the Philippines and Taiwan, while Mexico saw landfall of Hurricane Patricia, the strongest hurricane observed in the Western Hemisphere with maximum sustained winds of 215 mph.

One of the most notable typhoon events of this active season was Super Typhoon Noul, which impacted the Northern Philippines as a Category 5 storm on May 10. Later in the year, Typhoon Chan-Hom made landfall in Zhoushan, China, near Shanghai, on July 11. Estimated insured losses from this event were less than $340 million.

Super Typhoon Soudelor made landfall in Hualien County, Taiwan, on Aug. 8, with estimated one-minute sustained winds of 195 kilometer per hour (approximately 119 mph). Economic losses from Soudelor were estimated around $1.4 billion, with insured losses of around $120 million.

In Chennai, India, more than 1,000 millimeters (40 inches) of rainfall was measured in the month of November. In December, after more rain, Chennai experienced the highest 24-hour rainfall total of any December day in history. The resulting flooding was described as the worst in a century in an area with the fourth-largest economy in India. Initial estimates are that economic and insured losses may exceed $7.5 billion and $375 million, respectively.

The most impactful earthquake of the year was the April magnitude-7.8 event in Nepal, referred to as the most destructive and deadliest event of the year. Estimated economic and insured losses are around $4.8 billion and $210 million, respectively. The following September, a magnitude-8.3 earthquake struck near Illapel, Chile, causing estimated insured losses ranging from $600 million to $900 million.

James Waller is a research meteorologist with Guy Carpenter Analytics. He is responsible for extreme weather advisory and post-event analysis, and testing and evaluation of catastrophe models. Prior to joining Guy Carpenter, he worked with a team to define tornado-prone regions for the National Building Code of Canada and also reviewed Canadian snow loads.

Sydney Hedberg Director at Marsh McLennan
URL: https://www.brinknews.com/2015-a-quiet-year-for-disaster-insured-losses-despite-strong-el-nino-action/
Get ahead in a rapidly changing world. Sign up for our daily newsletter. Subscribe
​​