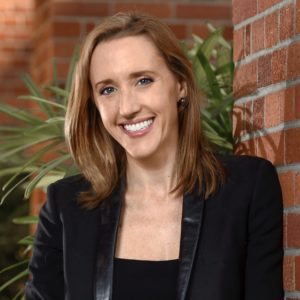 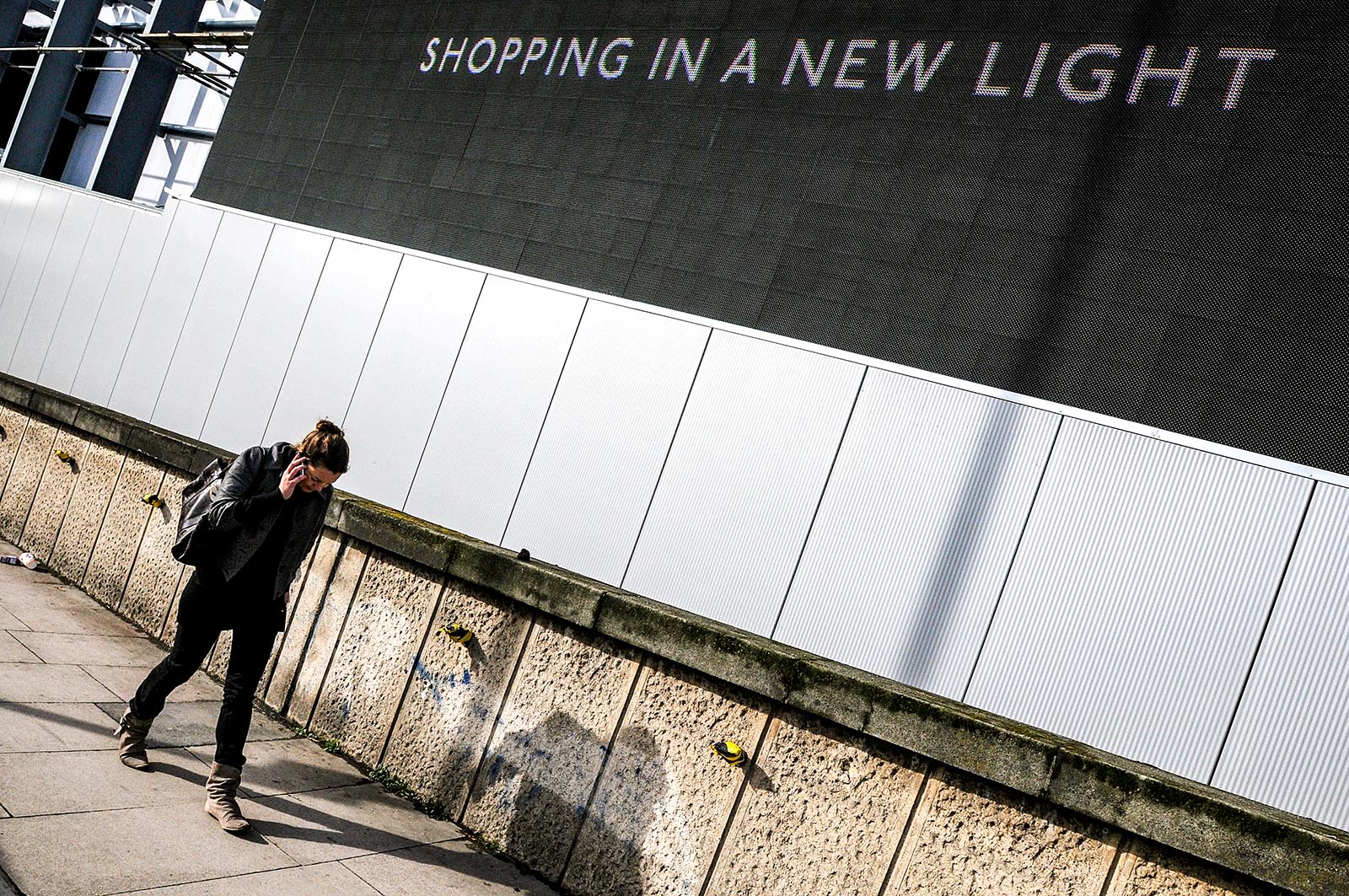 A woman walks under an electronic board advertising a new shopping mall in London. A new class of ethically conscious consumers is ascending, says University of Southern California professor Elizabeth Currid-Halkett.

A new consumer class—based not on income but on shared values and education—is ascendant. Elizabeth Currid-Halkett, professor of public policy at the University of Southern California, authored a book on the subject, coining the term “aspirational class” to describe this broad, somewhat amorphous group. BRINK News spoke to her about the kinds of people who fall into this category and what their rise entails for consumption trends and the social fabric.

BRINK News: To start us off, can you explain your idea of the aspirational class?

Elizabeth Currid-Halkett: The aspirational class is a group of people who I define as organized around a set of shared cultural norms and behaviors and practices. This is a group that I came to understand because when I was studying the consumer practices of today’s elites, I noticed that they’re not all wealthy and not actively trying to show that wealth. In fact, some of them aren’t wealthy at all.

But what they are often is extremely educated, and they seek out consumer experiences that are reflective of their education and their knowledge and their cultural position. They’re all coming from different economic backgrounds, and yet, sharing a similar cultural norm. The reason I call them the aspirational class is because, in many ways, their consumer choices are reflective not of trying to be ostentatious. They’re socially aware, environmentally aware and they try to make choices that point to an aspiration to be better humans, rather than simply saying, “I’m rich. I’m at the top of the pyramid.”

BRINK News: Do you see any demographic patterns in this aspirational class? Is there a skew toward any particular race, income bracket, gender?

Ms. Currid-Halkett: Well, it’s really hard because it’s a theoretical construct. It’s not like the census has a way of defining people as aspirational. The leading indicator that I see is education. I think educated urban dwellers tend to be the people we most see engaging in these practices.

And that is because education isn’t simply about having a bachelor’s degree. It is about the cultural capital and social capital you acquire while being educated. It’s what the sociologist Shamus Khan calls a learned form of capital. You learn what to read and what to talk about at dinner parties, which part of the newspapers are most important and what podcasts to listen to. So there’s a whole bunch of learning you get from the process of education. It isn’t simply calculus and English literature.

BRINK News: The aspirational class could perhaps be loosely defined as a cultural elite. Does that read correctly to you, and do you have a sense of how big and influential this class is?

Ms. Currid-Halkett: You’re absolutely right. It is a cultural elite as opposed to necessarily an economic elite. Don’t get me wrong, people who go to an Ivy League school or equivalent tend to also set themselves up to be an economical elite. These are not completely disentangled. But I think that, unlike previous elites, they’re actually a much bigger group. They are much bigger than your average top 1 percent.

But oddly, this new group is more pernicious. If you’re talking about very wealthy people—Russian oligarchs and Chinese tycoons—their lavish spending doesn’t affect our daily lives. In terms of inequality, what’s more impactful is a whole tier of society being more educated than the others and having options to reproduce that privilege.

Are they 5 percent, are they 10 percent? You could argue either way, but what they certainly aren’t is 0.1 percent. So when we spend a lot of time in the media making a big deal about the super, super rich, in a weird way, I think they’re less of a problem than this group that has built up a fortress around themselves: the upper-middle class cultural elites of America.

The tickets to social mobility in this country are education and health care. These are the things that the top tier is spending money on.

BRINK News: What does the rise of this ethically and culturally conscious class mean for retail—be it brick and mortar, online or omnichannel?

Ms. Currid-Halkett: It keeps companies and brands on their toes. And some brands and companies will go by the wayside, absolutely. But I think we see that this new group of people genuinely cares, and they’re willing to spend more for the thing that they know was ethically produced. That’s good, right? They don’t want an anonymized, standardized consumer experience. They have a desire for a more meaningful consumer experience. So in my view, this is all good. This is all really important for the betterment of our environment and our world. I actually can’t complain about those changes.

BRINK News: Do you anticipate or see similar trends in Europe or elsewhere in the world? How does this trend play out beyond the U.S.?

Ms. Currid-Halkett: That’s a really good question. I did not do my research outside of the U.S. However, I spend a good amount of time in the UK, and I have seen the same phenomena at play. My friends in that part of the world really identify with my observations. Certainly, the international media that have reviewed my book on this topic or have spoken to me about my book have really expressed that what I’m seeing in America is something that they see, too.

The trends and behaviors that I’m observing—the emergence of this cultural elite—it’s probably something that can be witnessed in many Western industrialized capitalist societies. I think that this is a kind of restructuring that is not only happening in America, even if I haven’t done the research in other countries. My sense of things is that this is alive and well around the world.

BRINK News: What changes will we see if there’s one class more focused on social mobility than other classes?

Ms. Currid-Halkett: You have more inequality. There’s no such thing as trickle down with a $60,000 a year tuition bill. That is the most disconcerting thing.

The data suggests that the tickets to social mobility in this country are education, good health care, and an emphasis on a better quality of life that’s not necessarily about material things. These are the things that the top tier is spending money on. The top 1 percent, on average, spends 6 percent of total expenditure on education; this is an average, so keep in mind there’s a lot of top 1 percent families that don’t have any children. If you contrast this to the middle class, and I mean the true middle class—the 40th to 60th percentile—their level of expenditure has been 1 percent for decades. One of the things that this is suggestive of is that there is a group of people that gets that education is the ticket to upper mobility. It’s also extremely expensive. It’s so much more expensive than a nice car or handbag.

This group of people, broadly drawn, is trying to do the right thing, at least on an individual level. Saving for your kid’s college is much more laudable than another trip to the Bahamas. However, what’s good for the individual isn’t always better for all of society. I don’t think we’ve figured out a way to address the disparity. A lot of private institutions are now focused on accepting bright students who do not come from high-income households, but that’s still a small sliver of students. Most of America doesn’t get to be a part of the elite college process. It is more complicated than simply being able to write a check.

BRINK News: What will happen if retailers and manufacturers don’t clear the bar of consumer expectations in terms of ethics?

Ms. Currid-Halkett: I do think consumers will hold companies more accountable. If there’s some sort of crisis, if there’s a sweatshop and it uses child labor, or there’s a fire, or there are unsafe working conditions, people tend to not want to be a part of that.

However, in the case of some of these retailers, it’s difficult because there is an efficiency to some of the companies today that is hard to abandon. Am I going to give up on a company because I think some of the stuff at the top doesn’t align with my sensibilities when it’s a company that makes my life easier? There are some trade-offs between boycotting Uber, for example, and actually getting to work on time. That’s the kind of trade-off that I’m not sure how consumers are going to handle. It will be interesting to see how this plays out as ethical decisions stand to impact the quality of life of the consumer.

Elizabeth Currid-Halkett is the James Irvine chair in urban and regional planning and professor of public policy at the University of Southern California Price School. She teaches courses in economic development and urban policy and planning.

Graham Pearce Partner, Global Defined Benefit Segment Leader at Mercer
URL: https://www.brinknews.com/a-new-class-of-cultural-elites-may-be-contributing-to-rising-inequality/
Get ahead in a rapidly changing world. Sign up for our daily newsletter. Subscribe
​​