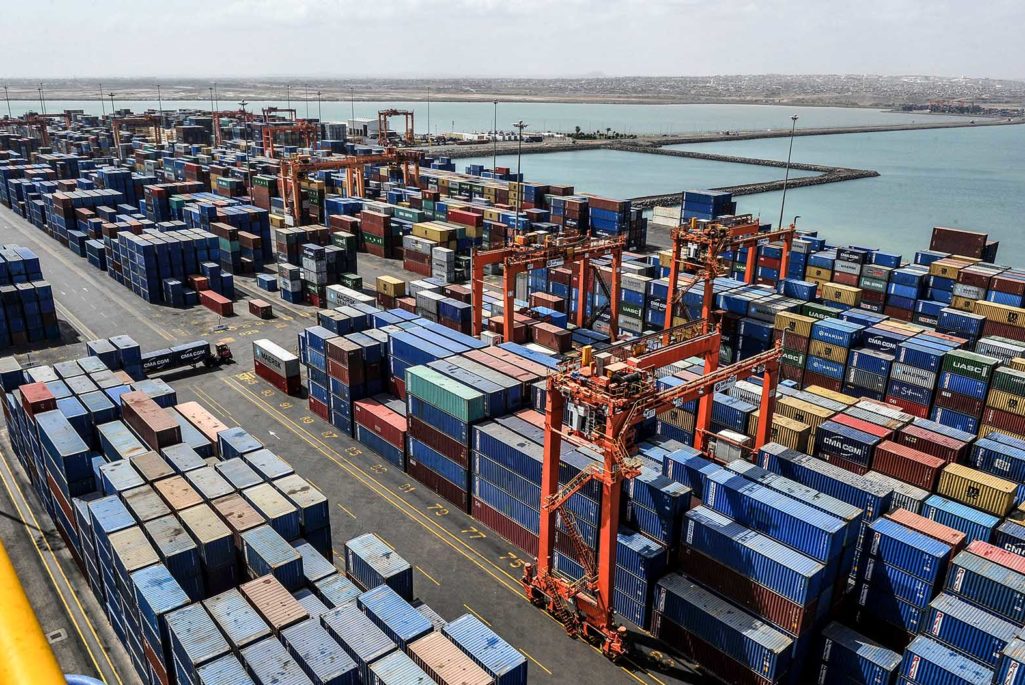 Shown are shipping containers and a general view of the port of Djibouti. The port is located at the southern entrance to the Red Sea, at the intersection of major international shipping lines connecting Asia, Africa and Europe. Africa’s economy, as a whole, in 2015 remained steady despite global economic headwinds, though its resource-rich countries were hurt by global weakness in commodity prices.

Africa’s growth in 2015 proved resilient in face of global economic headwinds, regional shocks due to plummeting commodity prices and extreme weather conditions around some parts of the continent, according to a recent report.

Africa remained the second fastest-growing economic global region, led only by East Asia. Several African countries were among the world’s best performers. According to the study’s forecast, the continent’s real GDP average growth is expected to hit 3.7 percent this year and rise to 4.5 percent in 2017.

The 2015 average GDP of 3.6 percent—higher than the global average of 3.1 percent—dipped slightly from its 3.7 percent average growth in 2014. Weaker global demand and falling commodity prices, which impacted Africa’s resource-rich countries, contributed to slightly weaker growth numbers.

With budgets under pressure across most of Africa, keeping debt in check has become a primary concern for policymakers. Governments pushed ahead with “prudent fiscal policies,” limited spending and improved tax collection, the report said.

The continent managed to decrease its net financial outflows in 2015, which amounted to $208 billion, a 1.8 percent decline from 2014.

African urbanization—termed a “megatrend” by the report—is happening at a historic pace and is coupled with an “unprecedented demographic boom.” Population in urban centers has doubled from 1995 to 475 million in 2015. But Africa’s rapid urbanization is unlike that of other regions, the report said, and is “currently accompanied by slow structural transformation.” Two-thirds of the infrastructure investment needed in Africa by 2050 has yet to be made.

Transforming Africa’s steady growth into better lives for its people will require “strong policy action to promote faster and more inclusive growth,” the report said. Currently, three of every four Africans are living under “poor human conditions,” compared with one in five people globally, the report said. “To achieve the development objectives set by African institutions and the international community, African countries must deepen structural and regulatory reforms, foster macroeconomic stability and tackle power supply bottlenecks in order to address the obstacles to the transformation of their economies,” the report said.

Adequate policies are needed to ensure that Africa benefits from urbanization. Such policies will lead to “economic development through higher agricultural productivity, industrialization, services stimulated by the growth of the middle class and foreign direct investment in urban corridors,” the report said.

Prompt action is needed to carve out a sustainable growth path by “addressing the effects of climate change as well as the scarcity of water and other natural resources, controlling air pollution, developing clean cost-efficient public transportation systems, improving waste collection and increasing access to energy,” the report said.

William Swelbar Chief Industry Analyst at Swelbar-Zhong Consultancy
URL: https://www.brinknews.com/africas-economic-growth-holds-steady-despite-global-headwinds/
Get ahead in a rapidly changing world. Sign up for our daily newsletter. Subscribe
​​