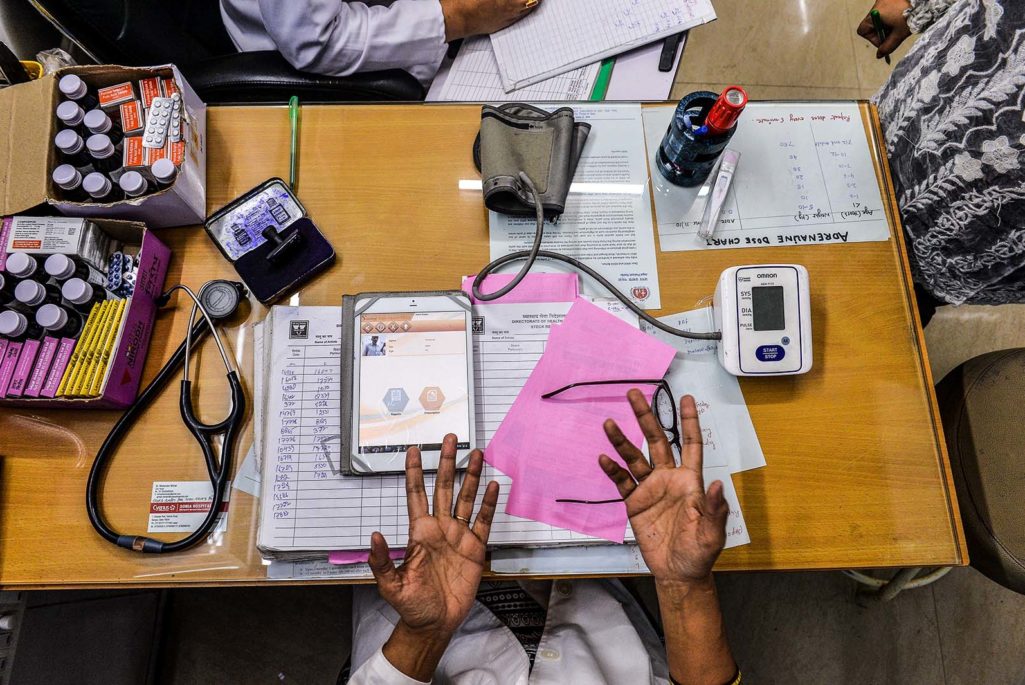 Alka Choudhary, an Indian doctor, prescribes medical tests and medicines as she examines a 62 year-old asthma sufferer at a clinic in his neighborhood in the slums of New Delhi.

The effects of antimicrobial resistance can have serious consequences in Asia going forward, as many countries in the region are faced with a limited availability of resources for nursing care and have healthcare systems that are otherwise stretched.

Asian countries house approximately 60 percent of the global population, and rates of drug-resistant bacteria in countries where such data are available—even in high-income countries such as Singapore and Brunei—are high relative to countries such as Australia, the U.S. and those in western and northern Europe.

The reasons for high rates are clear. In many Asian countries, antibiotics are available over the counter, with several studies estimating that antibiotic misuse in human health ranges from 10 percent to 50 percent of all antibiotics prescribed. The volume of antibiotics consumed as growth promoters or for prevention of infections in agriculture is likely to be huge as well, although reliable data are scarce.

Health systems are stretched in all Asian countries, particularly in the public sector, with limited resources available for nursing care, infection prevention and antibiotic stewardship. Increasing inter-hospital transfers and the rising phenomenon of medical tourism has also contributed to the spread of drug-resistant bacteria in hospitals around the world, particularly in Asia.

Failing to Learn from History

Alexander Fleming, who won the Nobel Prize in 1945 for discovering penicillin, warned about antimicrobial resistance during his Nobel lecture and a subsequent interview with the New York Times. He could generate microbes resistant to penicillin by exposing them to concentrations of the drug that were insufficient to kill them in the laboratory, and believed that this would play out in real life as the demand for the then miracle drug grew. “The thoughtless person playing with penicillin treatment is morally responsible for the death of the man who succumbs to infection with the penicillin-resistant organism,” he said.

Unfortunately, his warning went unheeded during the golden era of antibiotics—between the 1950s and 1970s—when increasingly powerful antibiotics were produced, and more complex medical treatments such as organ transplantation, cancer therapy and sophisticated surgery could be developed on the bedrock of this capability to prevent and treat virtually all microbial infections.

Since the 1980s, only a handful of antibiotics belonging to novel antimicrobial classes were commercialized.

Bacterial evolutionary processes have caught up and outpaced antibiotic development—there are now increasingly more human infections around the world caused by bacteria that are resistant to multiple antibiotics, including some that are resistant to all available antibiotics. Yet, the volume of existing antibiotics that are used for both human health and agriculture—a substantial proportion of which are inappropriately used—continues to increase year after year, providing further evolutionary pressure on microbes to develop resistance to the drugs.

If we continue on our current trajectory, independent reports by the World Bank and the Review on Antimicrobial Resistance, commissioned by the former UK Prime Minister David Cameron, estimate that by 2050, annual global GDP would fall by between 1.1 percent to 3.8 percent, global healthcare costs could increase between $300 billion to more than $1 trillion per year, and 10 million lives would be lost each year due to drug-resistant infections alone. These would collectively exceed the impact caused by any other modern disease or event, including the 2008 global financial crisis.

Fortunately, antimicrobial resistance has finally gained global attention, especially in the last couple of years. This culminated at the UN General Assembly in September, where the issue was raised at a special meeting—only the fourth time in history that a health issue was discussed at the General Assembly. Member states unanimously committed to developing national action plans that monitor the extent of the problem, provide sustainable economic incentives for the development of novel antibiotics and diagnostics, and provide stronger regulatory systems to reduce antibiotic misuse in human health and agriculture.

Will it Work in Asia?

As antibiotic use in both humans and agriculture has become so entrenched in our societies, the problem of antimicrobial resistance has in many ways become like a prototypical “wicked problem”—socially complex, arising from multiple inter-dependent causes, and difficult to resolve since each solution only tackles part of the problem, thus generating downstream consequences.

In many Asian countries, especially in rural regions, lack of access to life-saving antibiotics is an issue that costs more lives than antimicrobial resistance at present. An overall health-systems-based approach is required—one that will not compromise necessary access to antibiotics even as policies are considered that will curb over the counter and/or excessive antibiotic prescription. This approach should include a re-assessment of how hospitals are built and operated: The primary focus on cost-effective and caring healthcare delivery is correct, but greater emphasis on patient safety—which includes engineering, process and design changes to minimize cross-transmission of drug-resistant bacteria—is necessary.

Dramatically decreasing the use of antibiotics in agriculture as growth promoters or a way to keep animals healthy has been possible in high-income, developed countries, but the relative lack of technology or sanitation could result in decreased agricultural yields in lower-middle-income countries in Asia if the same was blindly enforced.

One possible interim solution is to prohibit the use of “medically important antibiotics” (so named because these antibiotics are also deemed critically important for human health) in animal and fish husbandry as growth promoters or preventive treatment against infection.

Regional and international cooperation is required, along with increased funding, to address the various issues associated with antimicrobial resistance. This may be challenging in the current political climate.

As with climate change, which is a similar albeit more encompassing problem, we appear to be finally turning the corner with regard to spurring global action against antimicrobial resistance. It is clear that urgent action is required because the costs of inaction are cumulative and high.

However, there are also many gaps in knowledge or evidence—especially with regard to which interventions may work under what setting—that need to be filled. Firm political leadership, public awareness, cultural transformation, a scientific approach as well as a “one health” framework toward evaluating policies and interventions would be ideal to derive long-term solutions to the problem of antimicrobial resistance both in Asia and beyond.