Are Military Officers the Missing Link in Your Risk Management Strategy? 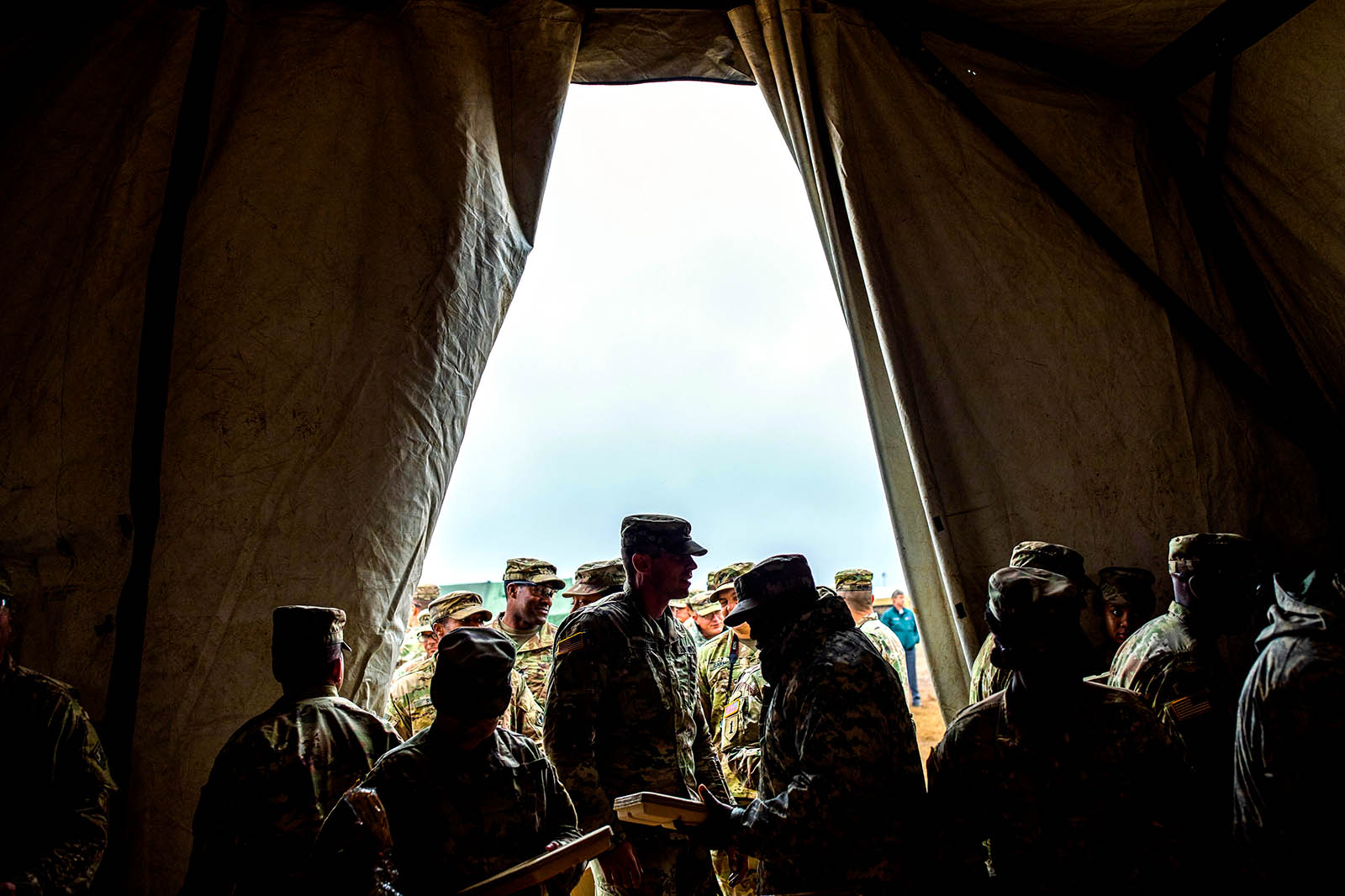 U.S. Army troops line up to receive a Thanksgiving meal at a base in Donna, Texas. Retired military officers bring to the private sector perspectives on crisis mitigation that can help organizations weather any storm.

It goes without saying that almost any boardroom would benefit from the experience and counsel of a retired military officer. I was over 50 before my father ever shared how he won the Bronze Star in Korea—even then, it was almost an afterthought. Most veterans I know seldom discuss their combat experiences, at least until they age and their experiences become part of their public legacy.

Given the breadth of challenges faced by the military, seasoned officers bring to the private sector a no-nonsense perspective on risk management and crisis mitigation that can help organizations weather any storm, no matter how severe.

The Value of Military Experience

Think of the issues facing businesses today. Workplace diversity? The U.S. military has been at the forefront of race and gender concerns for most of 70 years. Its own well-recorded mistakes ultimately served to help it work toward improvements.

High-tech advancement? When it comes to keeping abreast of emerging technology, few institutions can match the expertise and technical innovation of the armed forces.

Employee training and skill acquisition? It’s been a core mission of the military for decades.

Calm under siege? The opening moments of a crisis are critical for any company. And yet, an unfortunate number of CEOs and boards just aren’t experienced enough to use these moments wisely.

From Battlefield to Boardroom

The National Association of Corporate Directors (NACD) partners with military organizations to run From Battlefield to Boardroom, a special program to prepare retired officers for service on corporate boards. In NACD’s words, aspiring directors will “learn the ins and outs of the directorship profession and will be better equipped to position their military service to attract attention from executive recruiters and board directors.”

This week in Washington, D.C., NACD has been hosting a conference that covers everything from the rudiments of boardroom conduct to handling complicated issues of strategy, oversight, and stakeholder management for retired military. Retired U.S. Army Lt. Gen. Benjamin Freakley, now a special adviser on leadership initiatives to the president of Arizona State University, is a graduate of the NACD program and has since served on two corporate boards.

“Military officers bring three essential attributes to a corporate board,” Mr. Freakley says, “the capacity to think strategically, sizing up ‘big-picture’ considerations; the capacity to think critically, when the institution for whatever reason finds itself under siege; and a commitment to ethical conduct, no matter the circumstances. From their first day in the military, officers are put through rigorous ethical training. They can help organizations create and live up to such core values as integrity, respect, responsibility, and accountability.”

The capacity to remain cool under pressure is in high demand in corporate America. Retired military officers add real-world savvy to corporate boards.

Retired Rear Admiral Thomas C. Lynch, now the executive chair of NewDay USA, a mortgage financing firm (represented by my firm) that helps veterans get the most out of their Veterans Administration home loan benefits, adds: “In my three decades in the Navy, I dealt with almost every conceivable crisis. The capacity to remain cool under pressure is in high demand in corporate America—especially on boards of companies that find themselves under siege from time to time. Retired military officers add real-world savvy to corporate boards.”

Outside the Military Experience

To be sure, corporate boards tackle challenges that fall outside the realm of most military officers’ experience.

Maintaining transparency—a key corporate attribute these days—is not viewed the same way by those who are trained to believe in operational security, restricting certain information to a need-to-know basis.

Military officers have to keep certain stakeholders and constituencies happy—Department of Defense officials and members of Congress come to mind—but there’s no dynamic that matches a corporate board’s relationship to its shareholders. Like it or not, in today’s world, activists and sometimes belligerent shareholders, not to mention NGOs and environmentalists, require constant engagement—a reality that might throw someone who has spent a career in the military.

The same holds true in gleaning the truth about a company’s financial health from a quarterly report or a P&L statement. The first time or two might prove difficult for a career military officer.

But chances are the toughest issue for any new board member, military officers included, is figuring out how to mitigate the risk of unwarranted litigation—the increasing trend toward the criminalization of “normal” business behavior. New board members will wince at this statistic: More than 300,000 regulatory statutes in the U.S. carry potential criminal penalties, a figure that dwarfs any comparable metric in other industrialized countries.

Most military officers tend to be quick learners. “Though maybe just ‘avid learners’ at any point in time, once onboarded, retired flag and general officers can provide strength to the board to deal with adversity,” observes Greenberg Traurig’s Paul Ferrillo, a corporate governance specialist.

“They tend to be more rigorous in their analysis, yet strategic in their advice. They always look for solutions to problems; they normally don’t create problems on their own. Retired military tend to be strong yet overlooked candidates for board directorships.”

Mr. Ferrillo’s assessment is correct: No one really knows who has the courage and the clearest head until the first exchange takes place. Why head into the future without leadership that gets that?