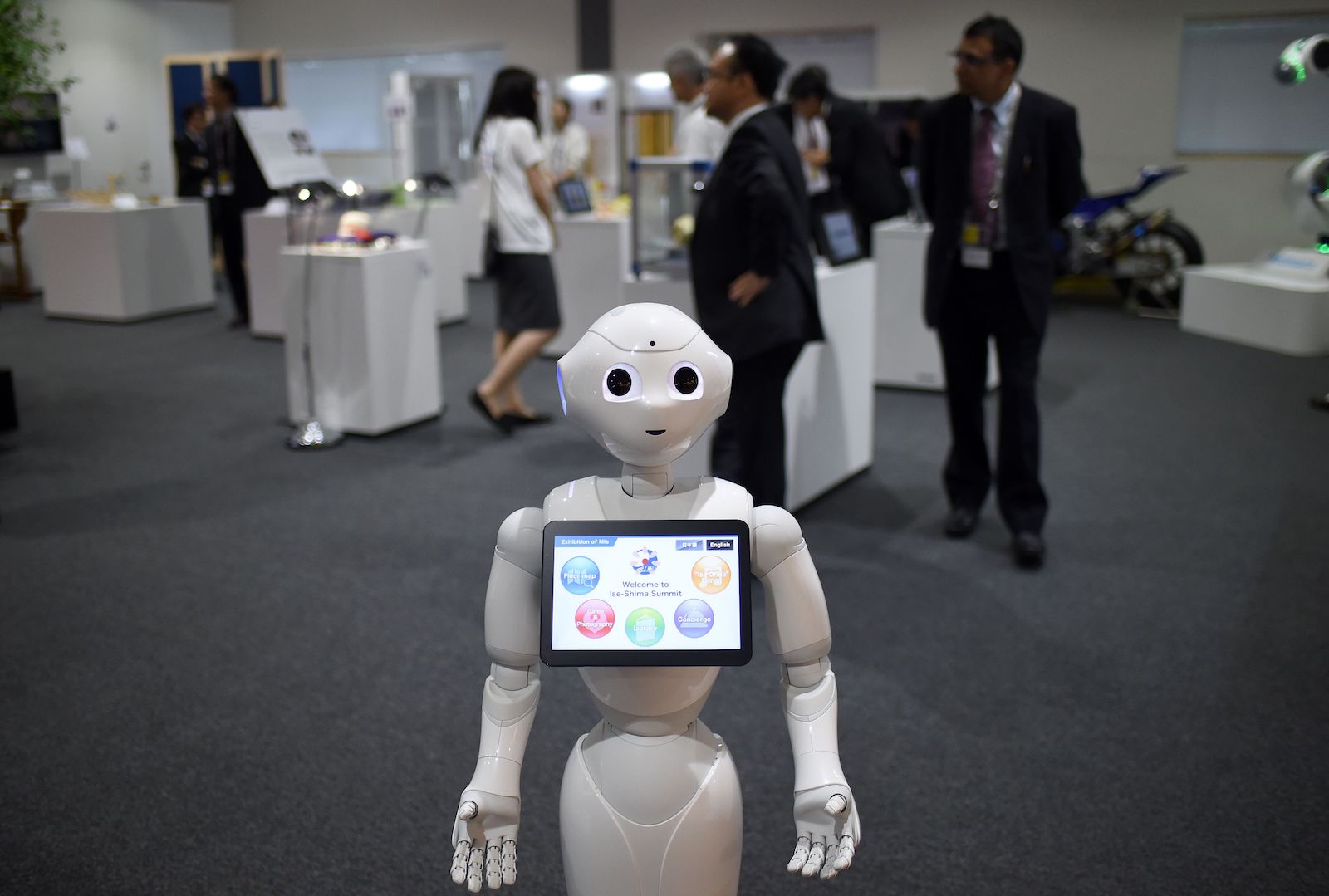 A robot welcomes people at the International Media Center in Ise city, Mie Prefecture of Japan. After China, Japan has the largest AI industry in Asia.

Artificial intelligence is poised to significantly boost the global economy. It is among the leading and most hyped technologies of the past two decades. Asia will make considerable gains, and the region, as a whole, is on track toward assuming global leadership in the development and commercialization of AI.

Without a doubt, there has been a worldwide surge in recent years toward driving breakthroughs in AI. The pertinent question currently is “How can AI be developed to attain speed and scalability?” It is a key priority for governments, academic institutions and businesses worldwide.

It is evident that there is a global push toward AI research, development and application across diverse spheres. In academia, there has been a rapid increase in publishing AI literature.  Private sector investment is also gathering pace. Large technology firms are allocating significant investments toward AI, data centers and other underlying technologies. IDC estimates that global spending on cognitive and AI systems will reach $77.6 billion in 2022, a threefold increase from the $24 billion forecasted for 2018—a compound annual growth rate of 37.3 percent.

AI has taken center stage in the solution set for Asia’s economic and social development. Moreover, capabilities that are unique to the region coupled with AI application to specific indigenous challenges will ensure the region’s leadership on several AI indicators in the forthcoming decade.

There is a steady development of home-grown AI capabilities across Asia. Moving from abstract to practical applications, AI is being used to increase efficiencies in the agribusiness sector in Malaysia, traffic management in China, education in Singapore and smart city initiatives across the region. Regional governments have set aside considerable resources toward AI development. One example highlighted by the Brookings Institute illustrates the Indian government’s initiative to increase funding for its Innovate for Digital India program in 2018 to $477 million—a figure twice its 2017 budget. In China’s case, earlier in 2018, its government reportedly earmarked more than $7 billion toward the development of two AI facilities in Beijing and Tianjin.

Business leaders who were surveyed expressed confidence regarding opportunities for AI in Asia. The survey also revealed that one-third of respondents believed that Asia leads the world in the quality of its AI assets, such as the availability of data, quality of R&D and government support. Almost 50 percent consider Asia on the same level as other regions in terms of talent availability, quality of solutions providers and ecosystem development. Moreover, an estimated 60 percent of respondents are of the opinion that Asia will lead in the development of core deep learning technologies, and more than half believe the region will lead in the production of commercialized applications. China is evidently a front-runner in Asia’s AI ecosystem (which we will discuss in detail in a follow-up article), assisted in no small measure by its massive smartphone-connected population and its high-tech manufacturing sector, which is setting global standards. The fact that China’s AI startups attracted roughly half of all global venture capital in 2018 highlights the quality of their innovation and growth potential. Apart from China, several other Asian countries are launching programs to foster indigenous AI industries, tasked with tackling domestic challenges and boosting growth.

Asian economies are also at an advantage considering their ability to build regional networks and collaborate. Furthermore, they are positioned as global hubs of trade and are backed by rich experience in taking advantage of capital flows and ideas to service global demand.

After China, Japan has the largest AI industry in Asia. In March 2017, Japan’s Strategic Council for AI Technology launched a plan outlining an industrialization roadmap using AI. The objective is to allow advancements across three main priority areas: productivity; mobility; and health, medical care and welfare. A fourth area that cuts across the others is information security.

In comparison to China, Japan’s AI economy seems incongruously small and has yet to assume mainstream proportions. Yet, IDC estimates that its value of AI-specific applications will more than double over the next four years, to 250 billion yen ($2.3 billion) by 2021—or roughly half of where China’s market is today.

However, one sphere where Japan takes the lead is its “mechatronics” industry—a term used to describe articulated robotics, automated process-enhanced machinery and other electronics areas. It still produces the bulk of the world’s most advanced articulated robots—over 115,000 annually. Over 75,000 are exported annually, yielding revenues of almost $2.7 billion, which the International Federation of Robots estimated is more than 50 percent of global consumption. Incidentally, Japan is also the world’s second-largest consumer of robots, behind China. Between 2016 and 2017, there was an 18 percent increase in consumption, although its density of robots to workers has waned in recent years compared to South Korea and Singapore.

South Korea is an ambitious contender in the global AI race and is seeking inspiration from both China and Japan. It has set aggressive timelines and development targets, and the government is providing strong support. South Korea is aspiring to earn a place in the top four AI markets globally by 2022. Its government even aims to beat China’s 2030 timeline by several years. Yet, in an approach that is similar to Japan’s strategy, South Korea’s AI research is prioritizing the nation’s already established sectors, such as robotics and process automation.

In May 2018, South Korea’s Presidential Fourth Industrial Revolution Committee announced plans to invest an estimated $2 billion into AI institutions. This will include establishing several new research institutes that will drive AI applications development for the robotics and automotive sectors. South Korea’s Ministry of Science and ICT are working to strengthen the AI talent base, with an agenda to recruit nearly 5,000 new AI and data scientists by 2022. In addition, it is also seeking to strengthen its domestic AI semiconductor industry.

The private sector in South Korea is actively committed to accelerating the AI industry. Samsung is at the forefront and has announced plans to invest $20 billion in emerging technologies, largely focused on AI research, autonomous driving and 5G over the next three years.

Southeast Asia Not Far Behind

While there is active development in the AI industry across Southeast Asia, it must also be highlighted that there is no one common approach being adopted by all countries. Policymakers and investors across the region are clearly leveraging their deep experience in network economics to ensure a competitive advantage for their respective countries. On account of exports and close integration in global and regional trade systems, ASEAN markets have long accrued real economic value. This has been possible due to effective coordination between sources of ideas, capital and the regulatory and policy frameworks that bind them.

In Singapore’s case, its forward-thinking policymakers perceive AI as a cornerstone of new technology development that can be capitalized upon. Although the city-state is small in geographic terms, it occupies a central role in the region’s provision of financial, logistical and other business services. Other ASEAN markets, Malaysia and Thailand in particular, are adopting a similar approach of AI collaboration on creating solutions that will service their mature export-oriented industries, such as food and energy production or electronics manufacturing.

Collaboration and a guided approach to AI development offer the possibility of transforming Southeast Asian economies. The region also provides an example of how unique regional strengths and an unwavering focus can be used to establish an AI ecosystem far more powerful than the sum of its parts.

Of particular significance is the fact that Asian governments have chosen to use AI as an accelerator for broader development goals. A key example is China’s Made in China 2025 and Singapore’s Smart Nation. The ability to connect highly focused government AI programs to broader national objectives will affirm the position of Asian countries as AI centers of excellence globally.

This is the first article in a series on developments in AI in the Asia-Pacific region and is adapted from a report from MIT Technology Review Insights.

Xianbin Yao Professorial Lecturer of International Studies at De LaSalle University Manila
URL: https://www.brinknews.com/asian-governments-push-for-ai/
Get ahead in a rapidly changing world. Sign up for our daily newsletter. Subscribe
​​