Australia in 2019—Headwinds and Crosscurrents 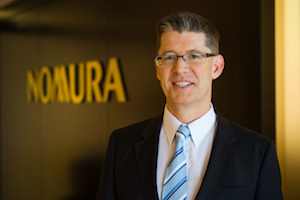 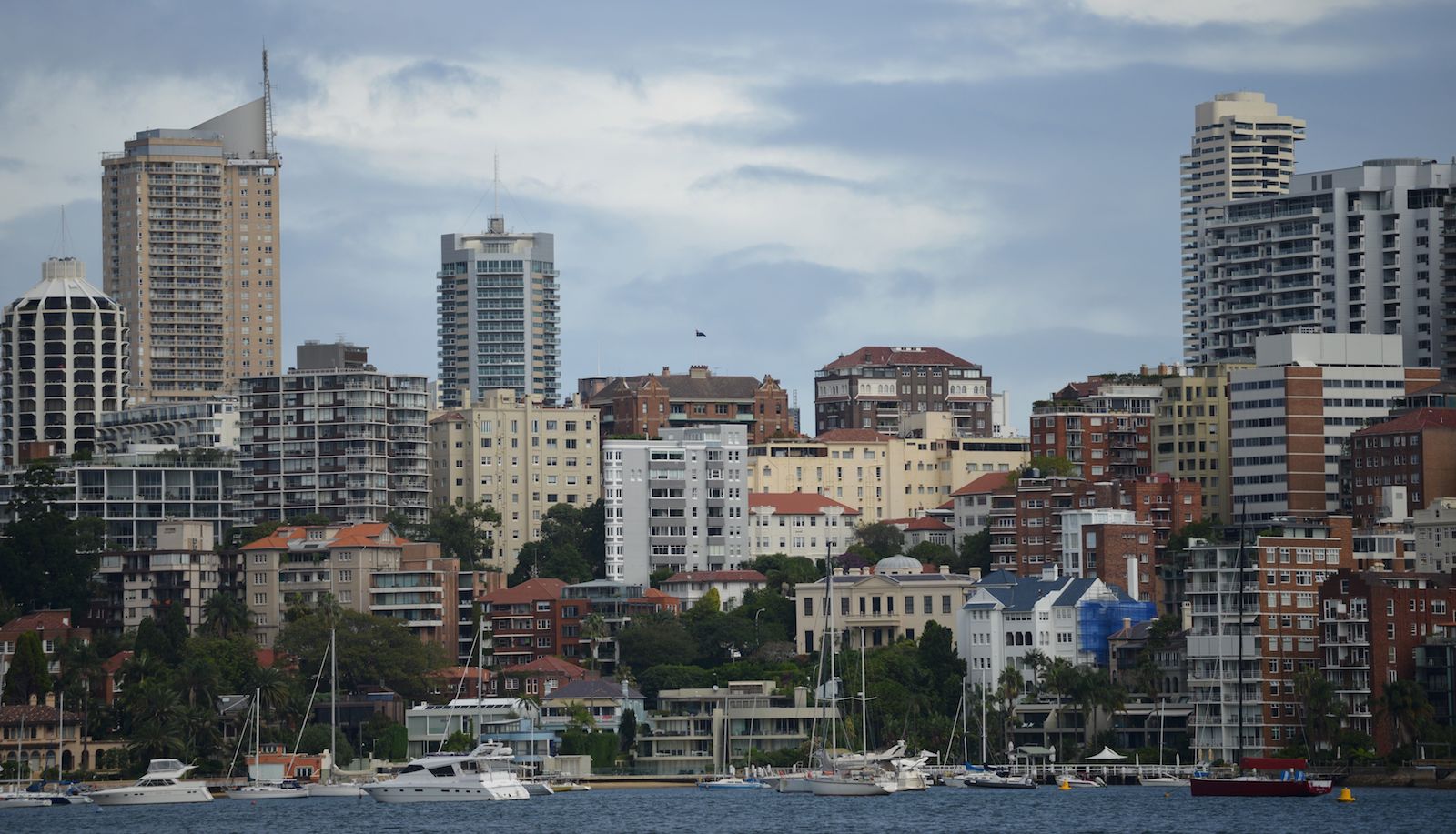 Commercial and residential properties are seen from Sydney Harbor in Sydney. The biggest local challenge in Australia is the deflating property market.

Australia is often called the “lucky country” with white sandy beaches, rich natural resources and a 27-year run of uninterrupted GDP growth. It certainly has some things on its side, in terms of a budget approaching surplus, low debt levels (by global standards), an independent and highly regarded central bank and a floating currency that tends to fall when things go bad, not to mention free and well-regulated markets and the rule of law.

Yet, success often breeds complacency, and the downside from this record run is a lack of progress in policy reform, including in key areas of environmental and energy policy. A narrow focus on real GDP growth as the prime metric of success also masks the significant contribution from strong population growth—circa 1.6 percent year-on-year—to that outcome; real GDP per capita measures look far less impressive.

The New Zealand Prime Minister, Jacinda Ardern, has also recently raised the bar with a well-being budget, which reminds us that there are other important measures of success, including improving income distribution and transitioning toward sustainable, low-emission growth.

A Tricky Regional and Global Backdrop

Australia is a relatively open country and has benefited for many years from proximity to the fast-growing Asian region. Yet the regional and global growth backdrops have become less supportive over the past six months and look set to become more challenging again, over at least the first half of this year.

China is Australia’s single largest export market—and the cautious near-term views of our China colleagues suggest a rising headwind. They note that consumers have become more cautious and foresee a further softening of the property market. A more relaxed attitude to environmental concerns over recent months—amid an understandable desire to support growth—has likely been helping, although this benefit should fade. More recent policy easing measures could help in time, although the downdraft from earlier tightening measures is still being felt, which suggests the economy may not gain traction until later in the year, as more policy easing measures are rolled out.

Rising global challenges are coming at an unfortunate time for Australia, as a number of local headwinds have begun to blow more fiercely.

The biggest local challenge is the deflating property market. Building approvals recorded large back-to-back declines over November and December, and they lead construction activity. Dwelling construction represents only around 5 percent of GDP, but swings can be large, and the Reserve Bank of Australia (RBA) expects dwelling construction to fall by around 10 percent over the next two and a half years. Weaker construction should also impact consumer purchase of associated goods, including furniture, refrigerators and carpeting, for example.

While acknowledging the RBA’s new neutral stance, we believe that, if it does move its cash rate this year, the direction would be down, not up.

Falling house prices pose another challenge to the debt-laden consumer via potential negative “wealth effects.” Sydney dwelling prices have fallen by around 12 percent from peak levels and by around 9 percent in Melbourne, albeit following much larger gains over prior years. The turn in the cycle reflects a number of factors—including reduced affordability following prior gains, earlier regulatory tightening and reduced foreign buying—and it looks like it will continue. Investors, in particular, have seen this turn and have stepped back, and the current low level of sales via auctions is consistent with falling prices. Uncertainty regarding future tax treatment of investor housing also appears to be weighing on sentiment, as does the recent Royal Commission into misconduct by financial service providers, which has contributed to the lending pendulum swinging from too easy to perhaps too tight. Finally, falling dwelling prices could impact builder enthusiasm for new construction, so the construction and price sides of the housing story are intertwined.

General consumer and business uncertainty ahead of a national election, expected in May, could also have an impact on economic developments. The left-leaning opposition Labor Party has proposed a number of policy changes, including some related to tax treatment of housing and dividends. This has seen a fierce debate unfold regarding potential costs and benefits that could encourage some consumers and businesses to “sit on their hands” for a time.

We do expect election uncertainty and a continuing cautious attitude toward lending to remain important themes over the coming months at a minimum, and we think it is likely that dwelling prices will continue to deflate further in this environment.

But There Are Some Positives

Lest we turn to despair, we note a number of positives on the other side of the ledger.

The mining outlook has improved; sentiment in the mining sector is solid, and bulk commodity prices have risen, continuing to beat consensus expectations.

The outlook for infrastructure investment is also positive, with major projects underway at both federal and state levels and with the private sector engaged in much work on behalf of the state.

Policy stabilizers look set to kick in, too. The Australian dollar has declined over the past 12 months, even as commodity prices have risen, providing material support for exports and income growth. We are also confident that the dynamics of a government trailing in opinion polls—three months out from an election and with a better-than-expected budget position—will result in some fiscal largesse announced in the coming April budget. Fresh spending and tax measures totaling around AU$9 billion ($6.4 billion) could add around 0.5 percentage points to this AU$1.8 trillion economy.

Still, on the policy front, recent developments could also bring the RBA into play. Earlier this month, the RBA removed guidance that “the next move in the cash rate is more likely up than down” and shifted to a completely neutral policy stance. Markets immediately responded by pricing in a 25 basis points rate cut by year-end with a high degree of confidence. Governor Philip Lowe outlined the case that would likely lead to a cut—namely a sustained rise in unemployment—but said that this was not yet the bank’s central case. Our reading of leading indicators for the labor market, such as job advertisements and business surveys, suggests the economy should generate around a net 20,000 jobs per month over the next quarter or two. This is down from around 30,000 jobs per month in mid-2018, but should be sufficient to keep the unemployment rate broadly steady at around 5 percent, given steady population growth and participation rates.

However, with inflation continuing to drift below the RBA’s 2-3 percent long-run target band—now for three full years with a forecast for no material rise this year—another leg lower in global growth or further slowing in the labor market could certainly bring the RBA into play. While acknowledging the RBA’s new neutral stance, we believe that, if it does move its cash rate this year, the direction would be down, not up.

On balance, we think Australia can achieve growth of around 2.5 percent in 2019, given population and productivity trends. A better outlook for China in the second half of the year following further policy easing would certainly help, and a likely extended pause from the Fed could also buoy global sentiment. However, local headwinds from a weakening housing sector and falling house prices amid tighter financial conditions suggest that risks are tilted to the downside. Bolder policy initiatives from a new government, with a fresh mandate and clear air to follow through, given Australia’s three-year election cycle, would be the best way to ensure that Australia remains the lucky country.

Andrew Ticehurst joined Nomura in December 2014 as Australian economist and rate strategist and is part of Nomura’s regional research team. Andrew has covered Australia for 25 years, working variously as an economist, strategist, portfolio manager and trader.

John DeCicco Research Professor Emeritus at University of Michigan
URL: https://www.brinknews.com/australia-in-2019-headwinds-and-crosscurrents/
Get ahead in a rapidly changing world. Sign up for our daily newsletter. Subscribe
​​