Bad News for the ‘Blue Economy’ 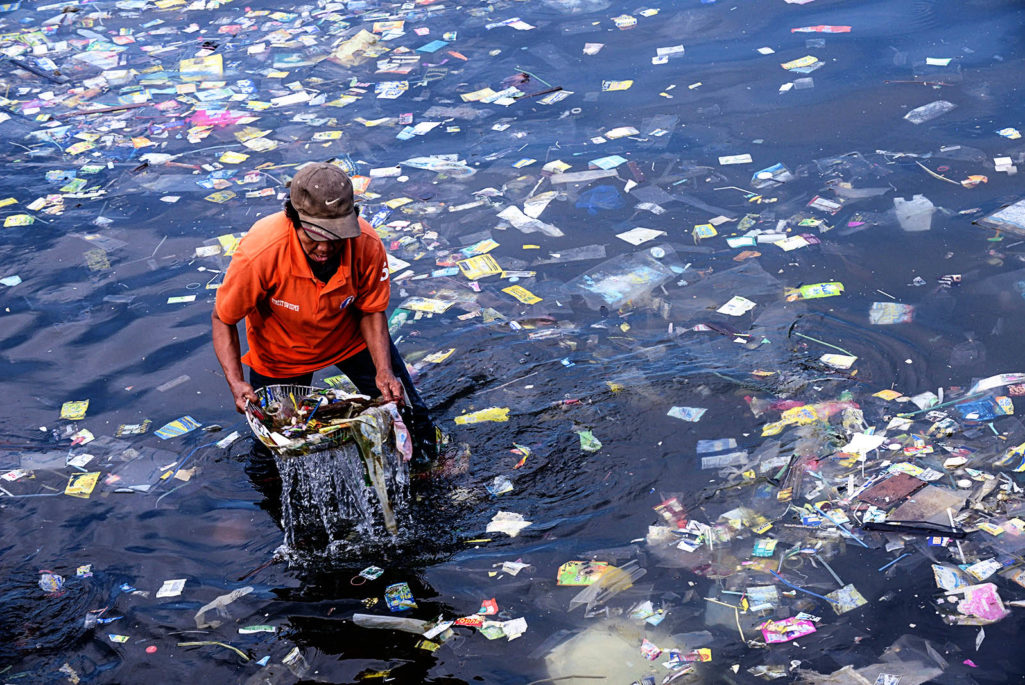 Plastic bags and other rubbish are collected from the waters of Manila Bay during a campaign by environmental activists and volunteers calling for a ban of the use of plastic bags.

Even grade school children know the oceans are choked with plastic, but until recently there were no good estimates of just how bad the situation was. It turns out that the best guess is 5.25 trillion pieces of plastic—from large to micro-particles—weighing in at about 269,000 tons.

“That’s like 38,000 African Elephants or stacking 2-liter water bottles from here to the moon and back, twice,” Marcus Eriksen, leader of the scientific study making those estimates, said during a recent online Q&A session for Reddit.

Eriksen’s five-year study found plastic in every ocean his team examined, even in the most remote regions of the globe.

Ocean plastic eventually congregates at “gyres,” where currents converge, and ends up falling victim to the elements: The sun makes the plastic brittle, and the waves act like huge blenders or shredders, producing smaller and smaller pieces that eventually get absorbed through the food chain, settle on the ocean floor, or swirl around in a kind of ocean-going plasticized soup.

Bad News for the ‘Blue Economy’

“However, we stress that our estimates are highly conservative, and may be considered minimum estimates,” Eriksen says in his report.

If something isn’t done to decrease the flow of plastic into the ocean then we’ll face continued pollution of marine food webs, including fish we harvest to feed the world, Eriksen said.

According to a UN concept paper on the blue economy:

“We suspect that more animals are killed by vagrant plastic waste than by even climate change—a hypothesis that needs to be seriously tested,” wrote Charles J. Moore, a captain in the merchant marine and founder of the Algalita Marine Research and Education Institute.

And even though there’s no reasonable way to remove all the plastic from the water, there should be an emphasis on manufacturing reusable plastics, Eriksen said.

“All solutions must happen upstream. Better waste management means smarter products designed for it,” Eriksen said. “I urge the plastics industries to go for 100 percent recovery of their products, or 100 percent environmental harmlessness.”

The American Chemistry Council, a trade group for the plastics industry, issued a statement saying, “America’s plastic makers wholeheartedly agree that littered plastics of any kind do not belong in the marine environment.” The organization went on to point out several ongoing industry efforts aimed at stemming the flow of plastics into the ocean, including the Global Declaration and its 185 projects that have been completed or are ongoing in various parts of the world.

But Eriksen doesn’t agree that the ACC is doing enough. He wants to see problem items phased out altogether. “For the last decade the ACC has fought source reduction, even for products like plastic bags, microbeads, and styrofoam cup and plates,” he said. “These items cost taxpayers a lot of money to deal with, so we want them phased out in favor of smarter alternatives. This is the frontline conflict we have with industry, it’s more recycle bins vs. phase outs of problem products.”

Mark Campanale Founder and Executive Chair of The Carbon Tracker Initiative
URL: https://www.brinknews.com/bad-news-for-the-blue-economy/
Get ahead in a rapidly changing world. Sign up for our daily newsletter. Subscribe
​​