Brazil and Argentina — Polar Opposites on the Coronavirus, with Far-Reaching Consequences 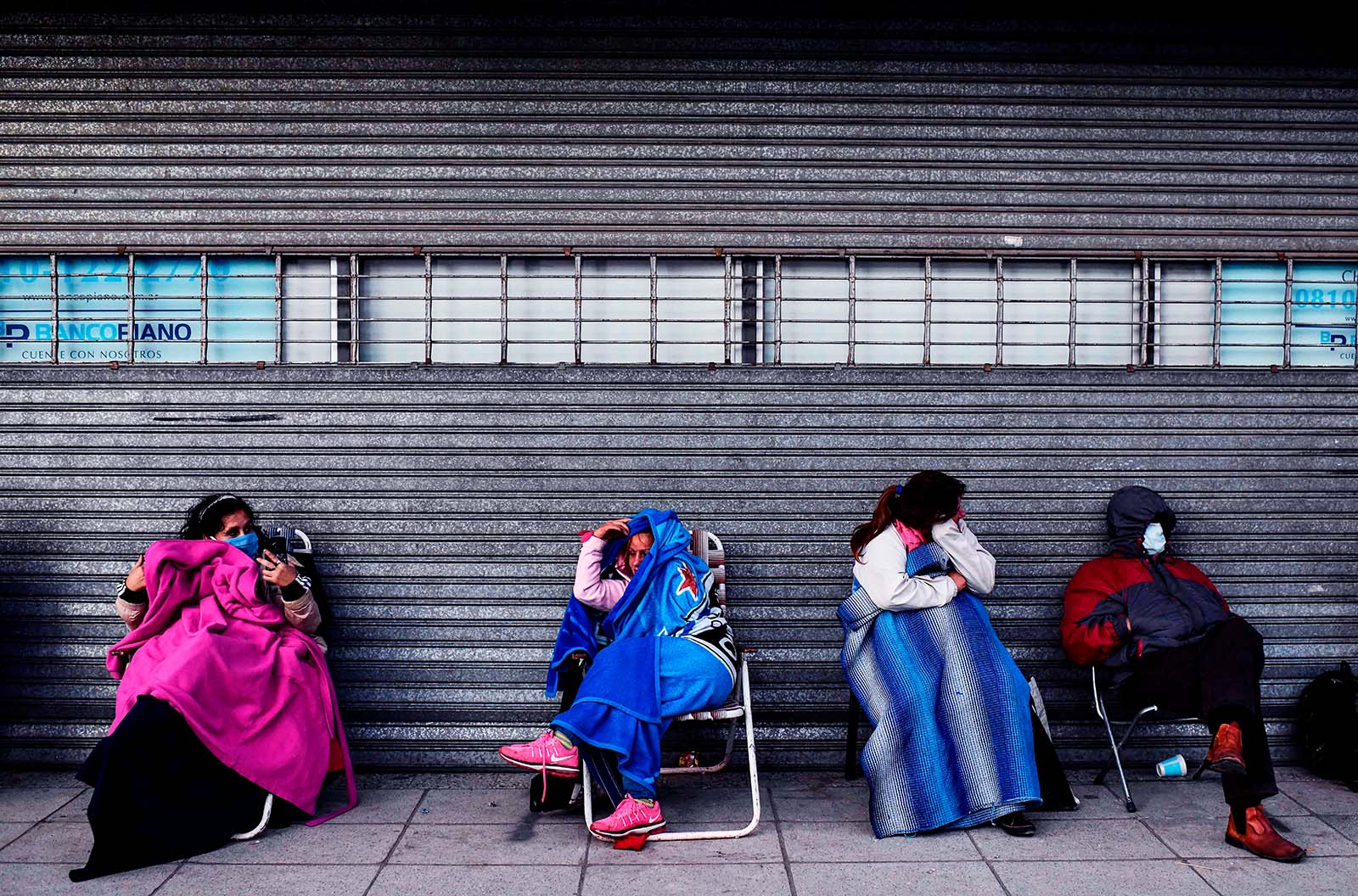 People line up outside a bank in the municipality of Jose C Paz, province of Buenos Aires during the lockdown in Argentina to slow the spread of the novel coronavirus COVID-19. All of the actions taken to mitigate the impact of the virus, like setting aside special hours at banks for seniors to retrieve their pensions, has a cost.

Usually, when there is a common enemy threatening two rival political forces, the differences are easily put aside in order to face the more urgent and dangerous opponent. Usually.

But this is not what is happening right now between Brazil and Argentina since COVID-19 arrived in these countries. Both are historical and fierce rivals in soccer. But, that aside, they are strong partners in many other fields. The two largest economies in South America also have a tradition of leadership in the region.

Unfortunately, this is not the situation right now.

Brazil and Argentina have not been in the same line for the last few months. Since the electoral campaign in Argentina in 2019, Brazilian President Jair Bolsonaro has been openly criticizing the kirchnerismo, the peronist section that won the presidency last November.

President Bolsonaro said that if the current president of Argentina, President Alberto Fernández, and his vice president, Cristina Kirchner, win, Argentina would take the path to be the “new Venezuela.” President Bolsonaro gave so much support to then-president Mauricio Macri that it even damaged President Macri’s own chances to be reelected. Former President Macri is a center-right politician, and even his followers disapproved of his alliance with the extreme-right-wing Brazilian president.

On the other hand, when he was still a candidate, President Fernández said that it was an honor not to have the support of a politician like President Bolsonaro. After being elected, President Fernández softened his speech, saying that relations with Brazil would be based on a pragmatic view and ignoring ideological disputes.

But this is not working at all. President Bolsonaro did not come to President Fernández’s inauguration. And, since then, bilateral commerce fell, and MERCOSUR, the alliance between both countries — plus Uruguay and Paraguay — is frozen.

The lack of synchrony between both countries turned into a childish and flat rivalry, in which they were unable to look ahead and think about the future of this part of the world in a moment when so many changes were happening.

And so we had the arrival of COVID-19. And each one of the leaders took a totally different approach on how to fight it — or not fight it at all. The disease made the differences between both of them even more visible.

In an ideal situation, the two neighboring countries would sit and talk rationally about challenges they have in common: how to manage border controls, how to spot the disease in airports, how to maintain surveillance on products that are exchanged by land, and the real daily life of the citizens of both countries, especially the ones who live along the 1,200 kilometer border.

None of that happened.

President Fernández decided to unleash a deluge of policies designed to face the spread of the disease, just like many responsible countries in the world are doing. He said that “you can recover a dead economy, but not a dead person.”

Meanwhile, the Brazilian president chose to be a denialist of the lethality of the virus.

He keeps saying that COVID-19 is just like a “small flu,” and only old or fragile people will die. “I don’t deny the existence of COVID-19, and that people are going to die. But this is part of life,” he said.

He justifies this statement saying that measures like quarantine or lockdown would stop the economy, and that would cause, in his mind, much more damage to the country. Today, Brazil has the highest number of infected and dead in consequence of COVID-19 in the region.

In Brazil, COVID-19 became a political feud, that could not only put President Bolsonaro’s reelection in danger, but also his ability to stay in office.

Last Sunday, President Fernández made the decision to extend and make the quarantine still more severe. There are now more than 6,000 people facing judicial trials for not respecting the quarantine. Police are controlling the streets and the entrance of many of the public transports. Borders are closed by land, sea and air. Even the border with Brazil is closed.

In the Argentinian lockdown, everyone must stay home. People are allowed to go out only to buy basic goods, such as food and medicines. One can’t even walk their dog. The government included this in its decree. One can take the dog outside, but with the only purpose for them to do their needs. Walking with them is completely forbidden.

There are exceptions, of course. Health care professionals, people working in pharmaceutical, food and oil business can circulate. Journalists as well, but with a special permit issued by the authorities.

President Bolsonaro Fighting With His Cabinet

President Bolsonaro has not changed his mind. But there are members of his cabinet, representatives in the Congress, governors and even members of the Supreme Court who do not agree with the president. The health secretary, Henrique Mandetta, is in favor of more restrictive measures like quarantine and locking some sectors of economy. His job is at risk because of his disagreement with President Bolsonaro, but he has a lot of support from the Congress, and now from other powerful secretaries, such as Minister of the Economy Paulo Guedes and Justice Minister Sérgio Moro.

Mandetta says that if these isolation measures are not taken, the whole Brazilian health system could collapse. But, the day after his health minister said this, President Bolsonaro went to a popular street market in Brasilia, doing all the opposite, taking selfies and hugging people, making it difficult to determine who the real voice of the government is.

There are also two governors, João Doria, from São Paulo, and Wilson Witzel, from Rio de Janeiro, who took action, like implementing partial quarantine and promoting social compensation for the ones who work in the informal market. But President Bolsonaro is angry with them and trying to make them reverse these decisions.

He thinks they are doing this with electoral purposes. President Bolsonaro, Doria and Witzel, indeed, have plans to dispute the next election in 2020.

For President Fernández, his quick response to the coronavirus challenge has been a political relief. He started in office with many economic challenges. Inflation is 55% per year, the country has a huge debt that corresponds to 97% of its GDP, poverty is around 40% and unemployment is 10%. And he did not seem to have a plan to reverse this situation.

People elected him with the hope that he had a solution, but till now, nothing significant has been done. COVID-19 turned the attention away from the economic situation of Argentina. Although his management of the health crisis is good for his image, there will be a moment in which the check will arrive.

All of the actions taken to mitigate the impact of the virus, like increasing the minimum wage, setting aside special hours at banks for seniors to retrieve their pensions, and implementing social plans for poor families, apart from new subsidies for medicine to the elderly, has a cost. Argentina was already in a financially precarious situation. So, in implementing COVID-19-specific policies, the government is basically printing money.

When and if the pandemic ends, President Fernández will very likely have to face a worse recession than he had inherited and could be on the brink of hyperinflation. Unemployment is very likely to rise as well. If the quarantine takes too long, many employers will be forced to fire people.

Things are not likely to be easier for President Bolsonaro. There is already a complaint being prepared by his opponents to be presented to the Hague Tribunal; part of the military is unhappy in their headquarters, and each and every night you can hear the sound of the panelaço, a very South American way of protesting, when people make noise from the windows with their pans.

Not only is his reelection in danger, but also his ability to stay in office.

Sylvia Colombo is a Latin American correspondent for Brazilian newspaper Folha de S.Paulo, based in Buenos Aires. Before that she a was cultural editor and correspondent in London and a Knight-Wallace fellow at the Michigan University.

Til Schuermann Partner and Co-Head of Oliver Wyman’s Risk & Public Policy Practice
URL: https://www.brinknews.com/brazil-president-bolsonaro-and-argentina-president-fernandez-responses-covid-19-isolation-measures/
Get ahead in a rapidly changing world. Sign up for our daily newsletter. Subscribe
​​