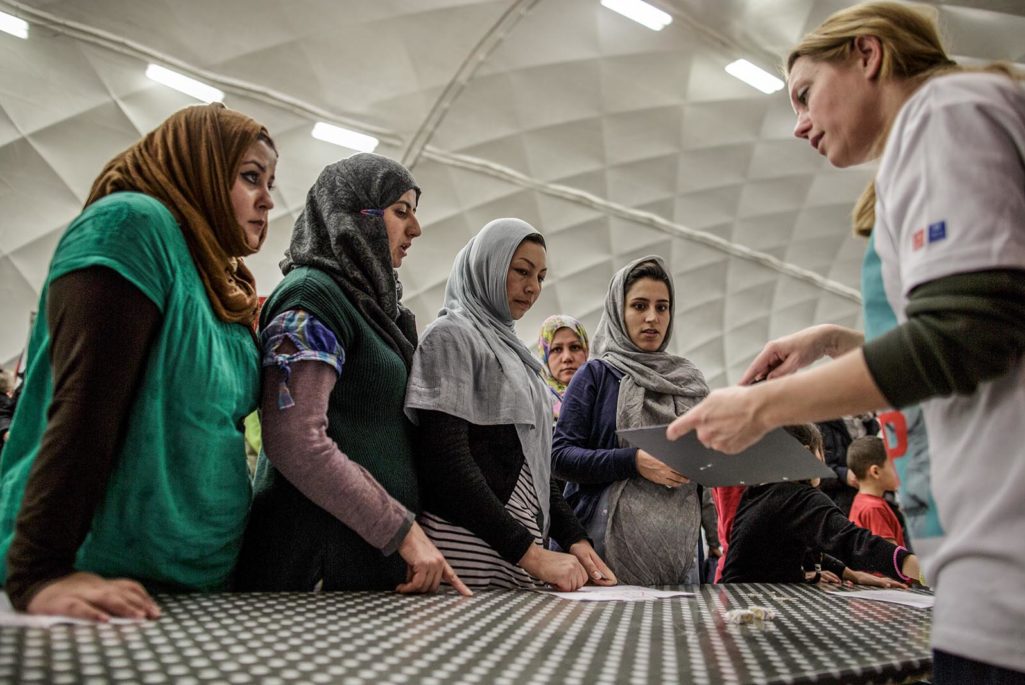 Migrants wait in a line to get clothes donated by Japanese casual clothing company Uniqlo at the Berliner Stadtmission in Berlin, Germany. Fast Retailing Co., Ltd., the parent company of Uniqlo, is donating approximately 50,000 articles of clothing to help refugees in Germany to stay warm through the winter.

One of the main objectives of businesses is to make profits for its shareholders, but profits alone are no longer enough.

The role of businesses has undergone a major transformation as society has come to expect more than just adherence to justifying corporate bottom line. More is expected of business leaders, as well.

Businesses in the second decade of the 21st century are expected to create value concurrently for their shareholders, consumers, employees and communities in the areas they operate, as well as for the society as a whole. This is what a major multinational company such as Nestlé calls creating shared value, a term it coined that is now used extensively by many businesses. Another major multinational, Unilever, has stated categorically that its “clear purposes are to make sustainable living a commonplace,” which is the best long-term way to grow its businesses.

A quick analysis of the current views of major multinational companies (MNCs) indicates that an overwhelming majority of what could be described as forward-looking and “enlightened companies” hold similar views as Nestlé and Unilever. Equally, a significant percentage of their shareholders and stakeholders are quite comfortable with the paradigm shift.

This, of course, does not mean that every MNC has embraced this philosophy. For example, most companies still compensate their senior executives on the basis of shareholder returns; seldom are their societal contributions considered when remuneration packages are decided.

There are signs that the mindset of business executives is changing. For example, Nestlé has not listed its shares in the New York Stock Exchange because one of the requirements for listing is quarterly projections. Nestlé’s view is that such projections lead to short-termism and not long-term investments.

Unilever has gone a step further. Its CEO, Paul Polman, has said candidly that the company would like long-term investors. If investors do not like its long-term business view, which emphasizes the new value creation model, he said he would respect them as human beings, but they should not put their “money into our company.”

In spite of, or because of, taking this high road, according to the latest figures from Financial Times, Unilever’s return on assets is 9.88 percent, return on equity 33.16 percent and return on investments 16.62 percent. This is a very creditable performance.

Nestlé returns are also good: 6.59 percent on assets, 14.68 percent on equity and 9.41 percent on investments. This shows that the companies that are well-run and have a social conscience can simultaneously create value for their shareholders as well as for the society as a whole.

Taking a long-term view is essential. Procter & Gamble started operation in 1837, Nestlé in 1857, Coca-Cola in 1886 and Unilever in 1880s. All these 130-plus-year-old companies plan to stay around for the next century and longer. In order to do so, they must continue to create value for their investors and the society as a whole. There are no other shortcuts or options.

Multinational companies are stepping into the traditional roles of non-governmental organizations and governments.

With changing mindsets, business models and societal expectations, most major MNCs are now producing annual sustainability reports. In our view, good and reliable sustainability reports will help investors, regulators and non-governmental organizations (NGOs), and should also increase their transparency, credibility and reputation. Having analyzed such reports for major companies, there is no question that they are in the right direction; however, they still have a long way to go.

There are many problems that such reports have to overcome. The first is the target audience. They seemed to be written for everybody and nobody at the same time. Few people, except for those who rank companies on sustainability and perhaps some regulators, read these reports. The reports are basically failing to connect with or inform an ever-increasing group of shareholders, most of whom have very specific interests. They are often heavy on pictures and graphics, but short on specifics. In order for people to read and make use of it, information needs to be targeted to specific interest groups and disseminated accordingly. This will require a determined effort, but the results will have perceptible impacts.

Take water, for example. If one analyzes the sustainability reports in this sector, unquestionably, companies such as Nestlé, Unilever, Procter & Gamble and Coca-Cola have made significant reductions in water use per unit of product manufactured and wastewater generated over the past decade. They treat their wastewater and then reuse it. They have made their staff conscious of the value of water, and by using the latest technology and better management practices, make water use increasingly efficient. These are undoubtedly very positive developments.

That said, at best, current sustainability reports provide information on their performance on a national basis and not by location, from where water is being extracted and used and wastewater is discharged. Water is always managed locally, thus, nationwide data is of limited use to either local stakeholders or water managers.

Equally, the reports rarely consider risks posed to local communities whose water demands for various uses are increasing. The companies and local communities use the same water sources. During years of severe drought, communities often resent that industries are using their sources of water, but they do not have enough. Thus, several MNCs had to cease operations during drought years in India and California. This is becoming an increasing risk.

Companies also need to explain how they calculate water risks. Mere mention of it in general is meaningless. How are they measuring, estimating and reporting water risks, since methodologies available for their assessments are rudimentary? Also, few companies report how they integrate water in their operation and management practices.

A major user of water is the supply chain of companies, especially for products that are water-intensive to produce. There is very little collaboration or information at present with their suppliers in terms of water uses, extent of wastewater treatments and variety of other water-related factors. Most sustainability reports treat these issues only anecdotally.

Equally, details of stakeholders’ engagement in water-related issues are basically unreported or underreported.

Irrespective of these shortcomings, it is now a fact that some business leaders have now become so involved in water-related issues that if one is asked to identify the most effective and dynamic water ambassadors of the world, Peter Brabeck, chairman of the board of Nestlé, rather than an academic or someone from the public sector, would probably top the list.

An important conclusion of our studies of MNCs and sustainability is to what extent companies are now also playing the traditional roles of NGOs and governments. We now see several major MNCs proactively seeking out problems with relation to many social and environmental issues, such as human right violations, use of child and indentured labor and biodiversity losses in their supply chains. They are also doing many development activities that are in the domain of governments, such as building schools; providing toilets, supplying clean water and libraries in schools; arranging extension and veterinary services for farmers; providing health and nutrition information to their consumers and contributing to women’s empowerment.

Enlightened companies such as Nestlé, Coca-Cola, Unilever and Procter & Gamble are steadily enlarging their societal footprints by complementing the activities that traditionally have been in the domains of NGOs and/or governments. We expect to see increased involvement from businesses in such areas.

In 1970, the eminent economist and Nobel Prize winner Milton Friedman wrote, “there is one and only one social responsibility of business—to use its resources and engage in activities designed to increase its profits so long as it stays within the rules of the game, which is to say, engages in open and free competition without deception or fraud.”

It’s likely that if Friedman were alive today, he would probably agree with the current paradigm where the businesses not only make profits for their shareholders, but also concurrently play important roles in terms of value creation for the entire society.

This article is based on a keynote lecture given at World Conference on Fabric and Homecare, Singapore, 7 October 2016.

Freddie Neve Middle East Associate at Asia House
URL: https://www.brinknews.com/business-and-sustainability-doing-well-by-doing-good/
Get ahead in a rapidly changing world. Sign up for our daily newsletter. Subscribe
​​