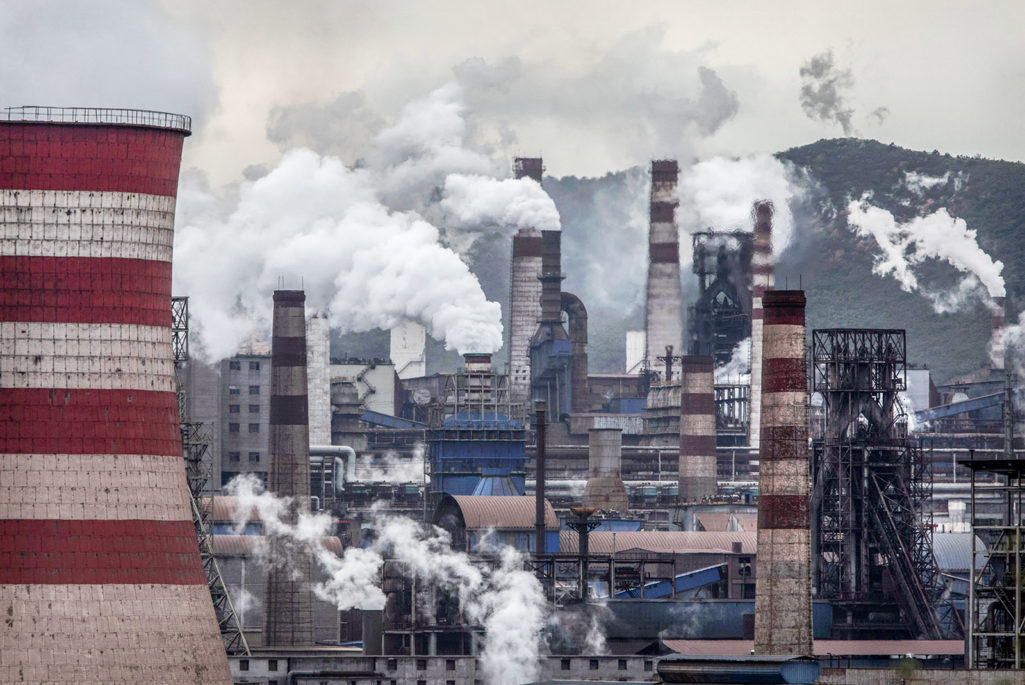 Smoke and steam billows from a Chinese state owned steel plant in Hebei, China. China, the world's largest polluter, reaffirmed its commitment to the Paris Climate Accord, after U.S. President Donald Trump announced his intentions to withdraw the United States from the agreement.

China became the world’s largest issuer of green bonds in 2016, accounting for 39 percent of the global total. Green bond issuance from China increased from almost zero in 2015 to 238 billion yuan ($36.2 billion) in 2016, according to a new report.

The spurt in green bond issuance in China results from key policy developments that began in late 2015. Regulations were published by the People’s Bank of China (PBoC) in December 2015 for green bond issuance in the China interbank market; shortly thereafter the National Development and Reform Commission (NDRC) published guidelines for the state-owned enterprise sector as well. It should be noted that green bonds are classified differently in China compared to the definition used by international investors. For example, the NDRC regulation allows issuers of green bonds to use up to 50 percent of the proceeds to repay outstanding bank loans and to invest in general working capital, while internationally, at least 95 percent of proceeds must be linked to green assets or projects.

What is “green” is defined differently, too. PBoC and NDRC definitions, for example, include a few project types that are not considered green by international investors—some of these include retrofits to fossil fuel power stations, clean coal, electricity grid transmission, infrastructure that carries fossil fuel as well as renewable energy, and large (>50 MW) hydropower electricity generation.

There were 35 new issuers of green bonds in China in 2016, with Shanghai Pudong Development Bank and Industrial bank—the two largest issuers—making up about 43 percent of all issuance.

In total, 82 percent of the green bond issuance in China in 2016 was by commercial banks and 16 percent was by corporations, which are playing a growing role in this area. The remaining bond issuance, according to the report, was by policy banks and asset-backed securities. In terms of theme, 21 percent of the proceeds are directed toward clean energy, making it the most popular investment theme, followed by clean transport (18 percent), energy saving (18 percent), resource conservation and recycling (17 percent), pollution prevention and control (17 percent), and ecological protection and climate change adaption (8 percent).

Finally, barring 3 percent of the bonds which are not rated, all other Chinese green bonds have a rating of A- or above, and three in four bonds issued in 2016 have an AAA rating.

As China deals with the twin troubles of air and water pollution as a result of its rapid economic growth and urbanization, the importance of ensuring that new infrastructure development is green is understood well.

Addressing environmental and climate change issues requires significant investment, and the emergence of green bonds is a promising sign for China as it looks to address these challenges.

According to the report, China’s experience demonstrates that policy tools are essential for the growth of green finance. That said, it still needs to push for a harmonization of standards to facilitate the entry of even more capital into green finance.

Tom Friedman Author, Reporter and Columnist for The New York Times
URL: https://www.brinknews.com/china-takes-global-green-bonds-market-by-storm/
Get ahead in a rapidly changing world. Sign up for our daily newsletter. Subscribe
​​