China’s Rise: The AIIB and the ‘One Belt, One Road’ 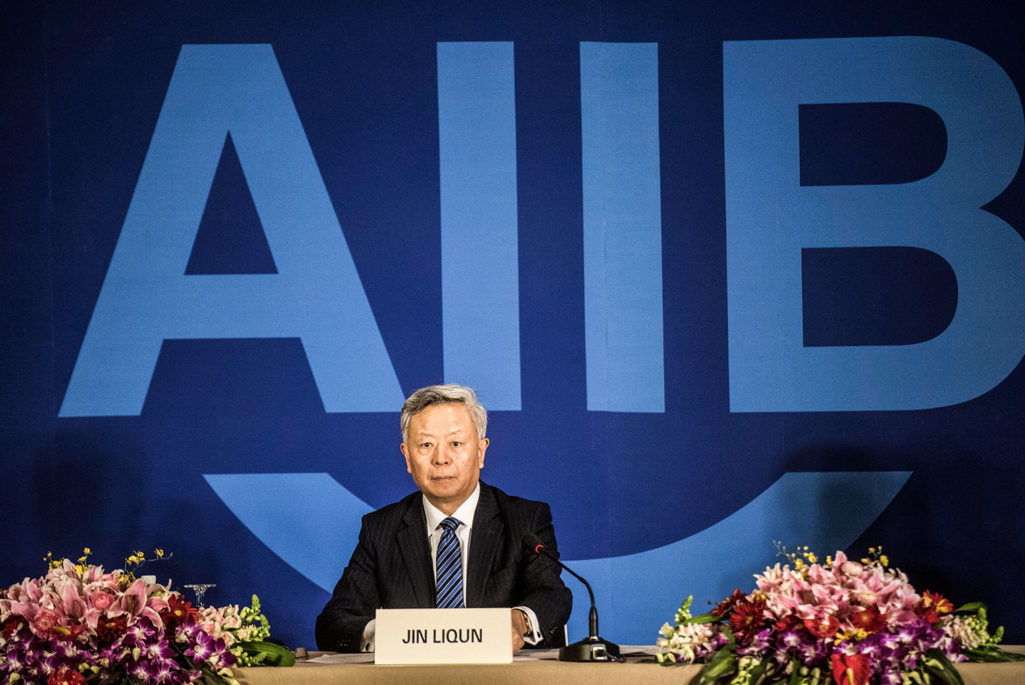 Jin Liqun, the first president of the Asian Infrastructure Investment Bank (AIIB), speaks to journalists during a press conference in Beijing on January 17, 2016. The AIIB will boost investment in the region while contributing to 'fairer' global economic governance, Chinese President Xi Jinping said on January 16 at the formal opening ceremony in Beijing. The China-backed AIIB—which has 57 members including major economies such as Australia and South Korea but notably excluding the US and Japan—is viewed by some as a rival to the World Bank and Asian Development Bank.

China’s six years of breakneck growth leading up to 2007 were accompanied by a rising trade surplus. But when that surplus fell sharply after the global crisis, Chinese authorities made up for the shortfall of demand with an increase in investment. Today, China is using a lot more investment to fuel slower growth than in the past: The real-world result of this falling capital productivity has been empty apartment buildings, unused airports and serious excess capacity in manufacturing. Meanwhile, consumption is very low, especially household consumption.

One response China has taken to this changing growth dynamic is to try to spur external demand for Chinese investment, specifically for major infrastructure projects. The other response has been internal: To initiate reforms that rebalance its economy from investment to consumption. The latter effort has a better chance of success than the former.

It is no coincidence that this period of excess capacity at home is the moment at which China launched expensive new initiatives, such as the Asian Infrastructure Investment Bank (AIIB), the BRICS Bank and the “One Belt, One Road” initiative in order to strengthen infrastructure both on the westward land route from China through Central Asia and on the southerly maritime routes from China through Southeast Asia.

Developing countries understand the purpose for the AIIB: Many have moved away from using the existing multilateral infrastructure investment banks because they are so slow and bureaucratic. The U.S. made a mild effort to dissuade some allies from joining the AIIB, fearing China would use it for narrow political or economic ends. But a diverse group of nearly 60 countries has signed up, making it difficult for China to use the bank to show favoritism in financing projects. In fact, the AIIB should be viewed as complementary to—and not competitive with—America’s own main economic initiative in the Asia-Pacific, the Trans-Pacific Partnership trade agreement.

The “One Belt, One Road” initiative is larger than the AIIB. It started with the idea that nearby countries in Central Asia could benefit from more transport infrastructure, some of which China could finance bilaterally. However, the economies of Central Asia are not that large, and the potential for investment is limited. For that reason, China added the idea of a maritime “road.”

Because “One Belt, One Road” will be implemented bilaterally between China and different partners, it may seem that there is more potential for China to use this initiative to vent some of its surplus. But I still doubt that this will be on a scale to make a macroeconomic difference for China.

Among the various developing countries along “One Belt, One Road” routes, there are some with relatively strong governance—India, Indonesia and Vietnam, for example—that will be hard for China to push around. Those countries will not want to accept large numbers of Chinese workers or take on large amounts of debt relative to their GDP. On the other hand, there are weak governance countries—Cambodia and Pakistan, for instance. It may be more feasible for China to send some of its surplus production to these countries, but there is a reasonable prospect that in the long run, China will not be paid.

Changing the incentives of local Chinese officials to align with fiscal rebalancing is a key institutional reform.

Domestic reform is a much more promising road to deal with China’s surplus problem, and to rebalance its economy away from such a heavy reliance on investment. The resolution that came out of the Third Plenum in November 2013 sketched out dozens, if not hundreds, of reforms. The ones that are likely to have the greatest effect are the household registration system (hukou), intergovernmental fiscal reform and financial liberalization, opening up China’s service sectors to competition.

Under hukou, 62 percent of the population is registered as rural residents, and it has been difficult for them to change this designation. Rural migrants to the cities cannot bring their families or truly become citizens of the cities. Reforming the system would help reallocate labor from low productivity (farming) to higher productivity (urban manufacturing and service employment) activities. But local governments worry that they will lack the resources to fund greater social services for migrant families.

China’s Ministry of Finance has announced general plans for fiscal reform to support rebalancing. First are measures to bolster local government revenue, potentially including a nationwide property tax. Second is to collect more dividends from its state enterprises. If this happens at both the local and the central level, it would reduce some of the bias towards investment and help ensure resources for government services. Third is to allow municipalities to issue bonds to fund their infrastructure projects, rather than relying on shorter-term bank loans.

The final aspect of fiscal reform may be the hardest: Local officials are generally rewarded for their ability to provide investment and growth. While the system has been successful at that, it has been less successful at meeting other objectives, such as clean air, food safety and high-quality education and health services. Changing the incentives of local officials to align with rebalancing is a key institutional reform.

China’s repressed financial system is a third area of reform. Real interest rates that are close to zero amount to both a tax on household savers and a subsidy to investment by firms and local governments able to borrow from the banking system. Almost everywhere in the world has had zero real interest rates in recent years, but in China, they go back more than a decade. The government has taken some initial steps to raise deposit and lending rates, as well as to allow a shadow banking system to develop with better returns to savers and higher-rate loans to riskier clients.

The problem with the current arrangement is that most shadow-banking wealth products are marketed by commercial banks and treated as low-risk by households. Total shadow banking lending has grown at an explosive rate in recent years and, not surprisingly, some of the funded investments are starting to go bad. The first corporate bond default occurred last year, and that result should help ease the moral hazard that has built up in the system. The announcement of the formal introduction of deposit insurance this year is another important step in the separation of a cautious commercial banking sector from a risky shadow-banking sector. Central Bank Governor Zhou Xiaochuan recently announced that interest rate liberalization would be completed within one to two years.

Recent moves to liberalize the bond and stock markets so that private firms can more easily go to the capital markets are also in the right direction, as are moves to increase the flexibility of the exchange rate. The IMF assesses that China’s exchange rate has gone from “substantial undervaluation” to “fairly valued” in recent years, so it should not be too difficult for the authorities to reduce their intervention and allow a more market-determined rate. Finally, opening up the capital account should be the last step in financial liberalization.

A final area of reform is to open up China’s service sectors to competition from private firms and the international market. The modern service sectors are the domain in which state-owned enterprises continue to be dominant, including financial services, telecom, media and logistics. The rebalancing from investment toward consumption means that, on the production side, industry will grow less rapidly than in the past while the service sectors expand. China will need more productivity growth in the service sectors, which is hard to achieve in a protected environment.

For other developing countries, successful rebalancing in China will create both challenges and opportunities. While China’s appetite for commodities is likely to moderate, rebalancing should lead to a rise in its demand for manufactures and services from other developing countries. And China is rapidly emerging as a major source of foreign direct investment. A world without Chinese rebalancing, by contrast, is likely to be more volatile.

A more in-depth version of this piece appears on the Brookings site and was condensed from a paper titled, “China’s rise as a regional and global power: The AIIB and the ‘one belt, one road,’” which was released in Summer 2015.

Tom Friedman Author, Reporter and Columnist for The New York Times
URL: https://www.brinknews.com/chinas-rise-the-aiib-and-the-one-belt-one-road/
Get ahead in a rapidly changing world. Sign up for our daily newsletter. Subscribe
​​