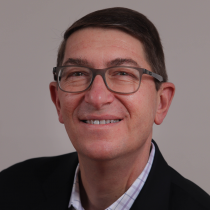 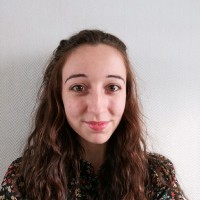 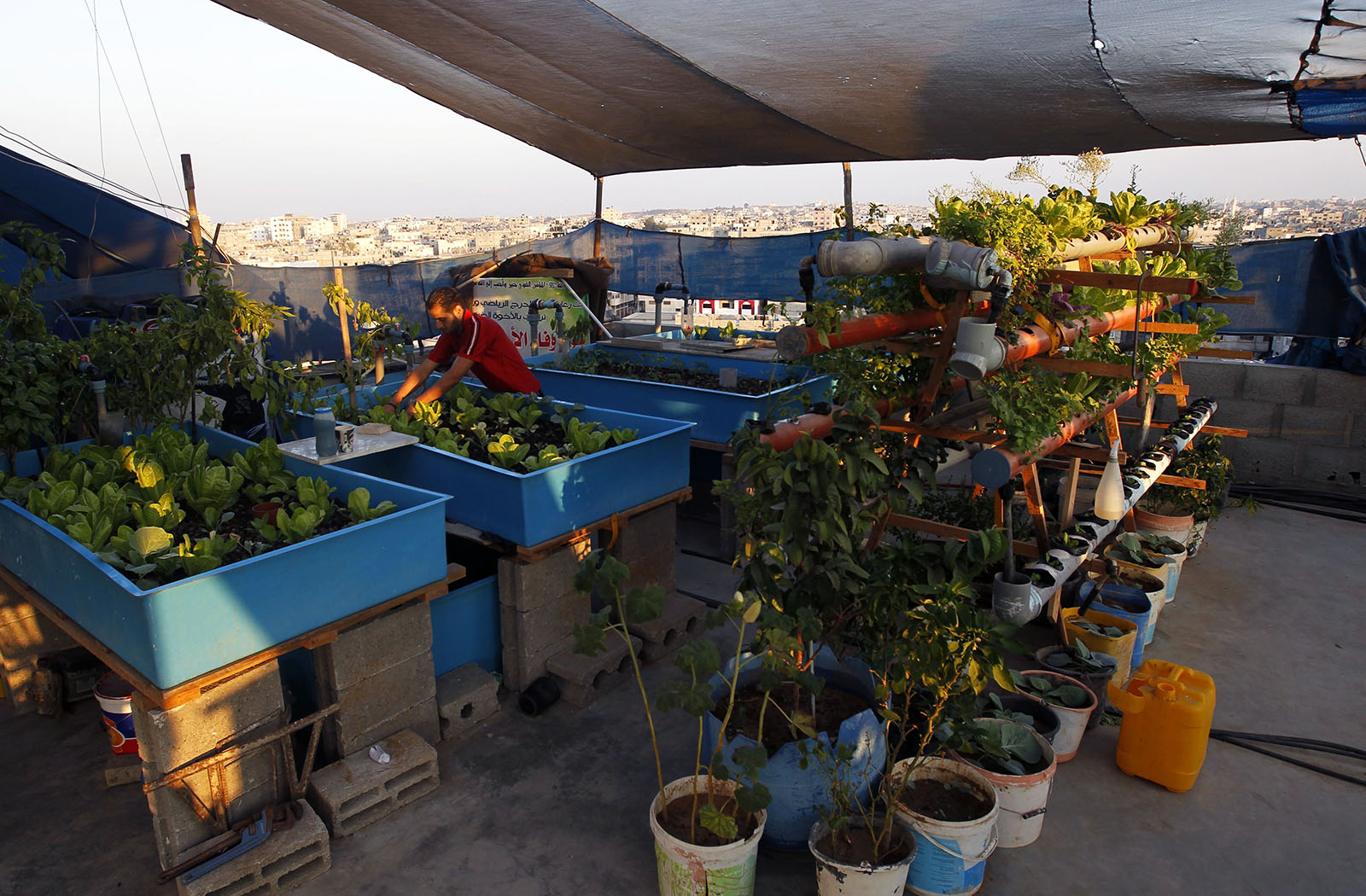 Plant beds on the rooftop of a building in Gaza City. Food security is one area where people-driven initiatives are on the rise in Middle East.

It’s difficult to look at the Middle East and consider its future optimistically. Much of the analysis of the region centers on crisis and collapse. There is plenty of both, fueled by wars and civil conflicts, poverty, extremism, and more. Given the human toll, focusing on all of this is natural — and it is necessary if solutions to deeply rooted problems are ever to be developed.

At the same time, such a singular focus holds risks. Envisioning what a better future could look like is also necessary. That is difficult if policymakers, scholars and others become inured to the current chaos and project forward only today’s bleak assumptions about the future.

A related risk is becoming blinded to “weak signals” — early indicators of what could become features of potential alternative futures. Weak signals are developments that are emerging outside the dominant trends of today. In the Middle East, probably the most dominant norm is the inability of governments to provide security and prosperity for their citizens. The COVID-19 pandemic is making this markedly worse. It is not just the obvious failed states — as Steven Cook recently observed, “sometimes state failure is a more chronic condition.”

But there is evidence of activities at the local level to create what is missing. Could these be signals of a future different than the one it is so easy to expect for the region?

Food security is one area where people-driven initiatives are on the rise. Challenges of water scarcity and limited arable land are exacerbated by government mismanagement and underinvestment in agricultural sectors. Over the last decade, home farming and agriculture-oriented startups have surfaced. Tulua is a Jordanian startup in aquaponics, an agricultural technique to grow plants with nutrient-filled water in a soilless medium. This innovative method is enabling individuals in local communities to grow their own crops year-round and generate income from it. In the UAE, the “My Arabian Almanakh” urban gardening program published a guidebook in 2017 to foster self-sufficiency and food sustainability in city populations in the Middle East.

Over the last few months, as the pandemic has deepened food insecurity, more such initiatives have come into view across the region. In Lebanon, which imports 85% of its food, home farming initiatives are responding to growing food shortages and steep price rises for staple foods. The Ghaletna project (“our crops” in Arabic) is providing local families with seedlings and agriculture training to improve self-sufficiency in Keserwan, north of Beirut. In May, Oscar-nominated Lebanese filmmaker Nadine Labaki launched the “Plant of my Heart” campaign, bringing multiple sustainable agriculture initiatives together to help citizens grow seeds and vegetables in their homes or on their lands.

Striving to secure their livelihoods in the pandemic and beyond, individual families across the region are accelerating a turn toward home farming with the hope of selling the crop surplus on local markets in the future. Responding to market disruptions caused by COVID-19, the initiative “From the Villages,” led by a group of Lebanese students, set up an online platform to support struggling local farmers and families in selling their products. And more urban locations are transforming into farming spots as well. In Damascus, Abdulrahman al-Masria, a local entrepreneur, turned his building rooftop into a hydroponic farm. By saving on space, water and pesticides, this initiative arose as a cost-effective answer to food shortages that were already serious due to the civil war.

In the face of COVID-19, the Middle East is seeing the rise of other kinds of innovative grassroots initiatives.

Will such initiatives address food insecurity for the nearly 110 million undernourished people across the Middle East? Of course not. But the data points to the emergence of a future trend that could make some difference in the region and for its people. We shouldn’t overstate what’s happening — weak signals are called that for a reason. They’re early in their progress and even earlier in their impact. They take time to materialize and become widespread. They may not be very reliable, as many things can influence the course they take and whether they spark major change.

But these micro-level, people-driven food and agriculture initiatives could foreshadow a rising, broader self-reliance in a region where government structures have rendered themselves increasingly irrelevant.

Seeds of Something Bigger?

In the face of COVID-19, the Middle East is seeing the rise of other kinds of innovative grassroots initiatives. Some of these directly target efficient and effective health responses at the individual and community levels to the spread and effects of the virus. In Libya, young tech developers launched the “covid.ly” app, which provides reliable and updated information on COVID-19 infection rates in the country. Other projects focus on providing medical technology. In response to media reports on equipment shortages, three Lebanese engineering students launched a project to produce preliminary prototypes of 3D-printed ventilators. The startup, FabLab in Benghazi, Libya, has developed disinfection tunnels for moving infected patients across hospital departments.

Other community-driven initiatives have mobilized to provide for people. Earlier this year a network of health and social professionals, the Iranian Scientific Association of Social Work, set up a hotline and website providing information on protection measures against the virus. In addition, Iranian women’s associations and local families have taken up the responsibility to quarantine infected populations in improvised rehabilitation centers. In Libya, new charity associations have emerged, like the Sidi Abdelghani Mosque Charity in Souq al-Jumaa, offering hygienic training in public schools. In the country’s rural areas, grassroots networks have launched awareness campaigns on social media and posters. In Lebanon, families from the civil initiative “Baytna Baytak” came together to provide housing for health workers next to hospitals.

It’s worth considering if such initiatives are emerging in a broader context in which citizens enable one another to become more meaningfully independent from the state for their welfare. Individuals and innovators are improving their own and each other’s lives through increasingly widespread and networked efforts. In a present-day reality of dashed popular trust in state structures, and those structures’ inability to address the struggles people contend with, such initiatives may foreshadow futures that reimagine social contracts.

In the southern region of Daraa in Syria, local campaigns to raise public awareness about the coronavirus and provide financial support and protective equipment have quickly been turned into an expanded workforce for the performance of government duties. State structures capitalizing on such efforts to recoup their lost legitimacy could disrupt and set back prospects for more independent modes of social organization and citizen empowerment in Syria and elsewhere in the region.

Another positive or enabling force to look for is increased and effective use of the internet by micro-initiatives to grow in scope and scale. Social media is already playing a key role in promoting resilience in the face of the coronavirus crisis. For example, it is providing a platform for Egyptian livestock traders to sell their cattle despite constraints imposed by government movement restrictions. On a larger level, AMEL ecosystem, a civil society network, is leveraging social media and webinars to disseminate accurate information on the virus and help civil organizations promote hygienic habits in Middle East communities.

It is important to project forward not only the “inescapable” consequences of today’s dominant conditions. We should also consider the potential acceleration of early signals of futures different from the one we expect. For the Middle East, that should include paying heed to examples of resilience at the micro level, independent of the sources of today’s grim narrative. Leaders in and outside the region need to see the nascent foundations for positive change exist before they can consider how to build on them for a different future.

This piece was first published by the Middle East Institute.

Founder and Principal of Foresight LLC

Steven Kenney is the founder and principal of Foresight LLC, a strategy consultancy, advising public and private sector executives on how to create their organizations’ future. He is also a non-resident fellow at Middle East Institute and leads MEI’s Strategic Foresight Initiative program.

Chloé Bernadaux received her master’s degree in International Security from Sciences Po Paris. She previously conducted research on gender dynamics in the Middle East at the Lebanese-American University in Beirut. She is also a contributor to several platforms, among them the International Institute for Middle East and Balkan Studies, Encyclopedia Geopolitica, and L’Orient Le Jour. The views presented in this piece are their own.

Carolina Klint Risk Management Leader, Continental Europe at Marsh
URL: https://www.brinknews.com/does-the-future-of-the-middle-east-lie-in-ignoring-the-state/
Get ahead in a rapidly changing world. Sign up for our daily newsletter. Subscribe
​​