EU-ASEAN Trade Deal: Debunking the Myths Around Rules of Origin 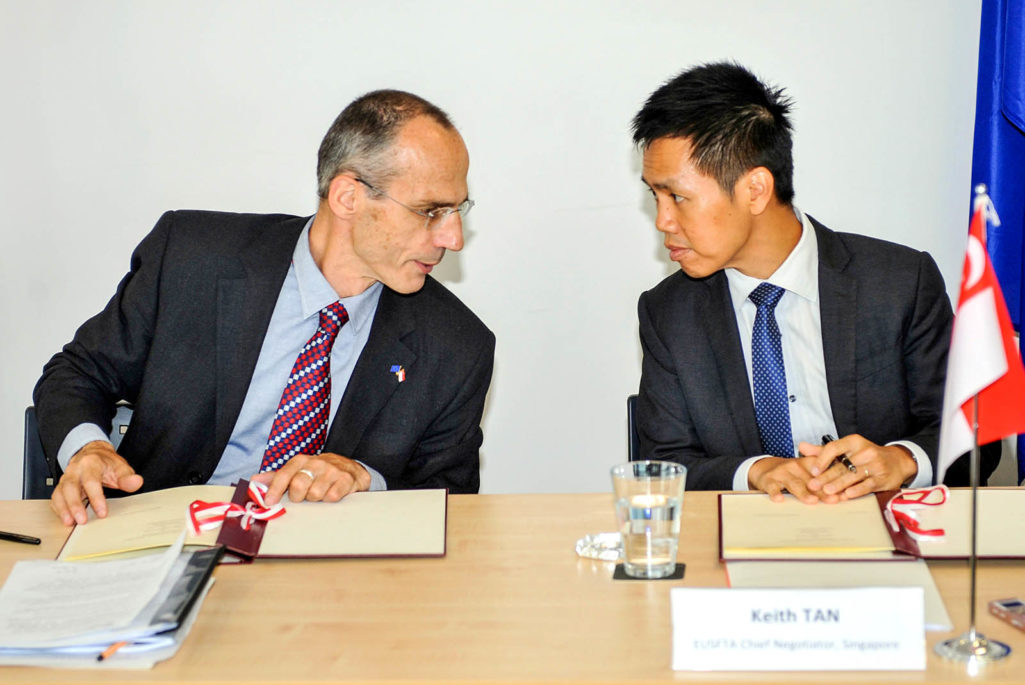 EU chief negotiator Rupert Schlegelmilch (L) and Keith Tan (R), Singapore's chief negotiator, chat during a media conference in Singapore on September 20, 2013. The FTA between the European Union and Singapore is the first FTA negotiated after the Lisbon Treaty came into force.

The recent ruling by the Court of Justice of the European Union to classify the EU-Singapore Free Trade Agreement (EUSFTA) as a “mixed” agreement—one that also needs approval from EU member states—ended the uncertainties surrounding the ratification procedure for trade deals in the EU.

As the first FTA negotiated after the Lisbon Treaty came into force, the EUSFTA was put in front of the court to clarify if the European Commission alone can finalize it without the involvement of individual EU member states.

The court confirmed that all chapters—excluding provisions on portfolio investment and Investor-State Dispute Settlement—fall within the EU’s “exclusive competence” for Brussels to act by itself. Once the European Parliament approves the agreement, the EU-only chapters, which constitute the lion’s share of the FTA, can be applied provisionally while awaiting approvals from 38 national and regional parliaments in the EU for the provisions on portfolio investment and Investor-State Dispute Settlement.

While Europe now speaks of the value of the deal and the decision mainly in terms of restoring credibility of the bloc’s trade policy, the overriding consideration of launching the EUSFTA negotiations back in 2010 was to pave the way for the eventual region-to-region agreement with the Association of Southeast Asian Nations (ASEAN), following nearly two years of futile negotiations.

The deal’s 96-page-long rules of origin (ROOs), however, lead to some uneasiness about the merit of the deal for Singapore and the practicality of it being used as a template for the prospective EU-ASEAN FTA. ROOs ensure that only goods and services originating in FTA partner countries receive negotiated benefits to prevent transshipment. Normally, country of origin is conferred to a product if it satisfies one or more of the three requirements: change of tariff classification (for example, importing tomatoes and exporting ketchup), local value added and specific process. While the EU’s trade accords typically adopt restrictive rules—in terms of higher local content or mixed criteria certification (referring to the use of two or more of the above criteria in determining origin), the ROOs contained in the EUSFTA are not as problematic as they seem.

The EU estimates that the EUSFTA will increase Singapore’s GDP and exports by $3 billion (0.94 percent) and $4 billion (10.4 percent) respectively. But skeptics say Singapore, which lacks indigenous inputs to add into exports, will face difficulty in meeting origin requirements for it to benefit as predicted. A closer scrutiny of the FTA text reveals that such fear is largely misplaced.

First of all, under the EUSFTA, the EU agrees to lift thresholds on import content ranging from 40 to 60 percent, whereas caps on non-originating materials under earlier EU agreements fluctuate between 30 and 50 percent. To put the EUSFTA’s relaxed local value-added requirement into perspective, the average import content of gross exports for Singapore during 2001 and 2011 was approximately 39 percent. Acknowledging Singapore’s uniqueness as an entrepôt economy, re-exports for certain products are also permitted as long as Singapore adds 10 percent of local content to the final exports. Given Singapore’s relatively high wages compared to the cost of imported goods, the requirement conceivably can be met with ease.

ASEAN can capitalize on new opportunities, provided that it engages in free trade with the EU en bloc.

For some products of key export interests to Singapore such as pharmaceuticals, petrochemicals and electronics, the EUSFTA generally applies co-equal rules to accord producers some flexibility to cherry-pick a preferred origin-certifying method to prove compliance. Moreover, a specified list of final goods of and intermediate inputs to those industries (for example, petroleum oils and gases, rectifiers and electrical insulators) originating in ASEAN countries is allowed to count toward Singapore’s local content.

Potential Obstacles to an EU-ASEAN Agreement?

The ROOs issue, in short, is not the bogeyman as far as the EUSFTA is concerned. But if the potential EU-ASEAN FTA likewise adopts product-by-product origin rules—instead of simple and general ROOs incorporated in ASEAN’s existing FTAs—will developing Southeast Asian countries with weaker institutional capacity be able to administer the crucial tasks of origin conferring and verifying?

This concern, although legitimate, can be eased by the fact that ASEAN countries have decades of experience navigating the EU’s ROOs through the latter’s unilateral trade liberalizing scheme, the Generalised System of Preference (GSP), introduced in 1971. Apart from Singapore, Brunei, Malaysia and Thailand, which have graduated out of the GSP, Indonesia, the Philippines and Vietnam are currently exporting to Europe under reduced tariffs, and Cambodia, Laos and Myanmar are benefiting from the more generous “Everything But Arms” (EBA) arrangement within the framework of the GSP.

Complying with the complex array of strict and mostly sector- and product-specific ROOs stipulated in the EBA and GSP is no easy task, yet most of the ASEAN countries have managed to meet the origin requirements and successfully claimed the benefits. For example, as of the first six months in 2015, 95.4 percent of EBA eligible imports from Laos entered the EU on a duty-free, quota-free basis. By comparison, the equivalent figures for the year 1997 and 2000 were 19 percent and 41 percent respectively.

Rules of Origin Should not be Concern for ASEAN

The high and increasing take-up rates of GSP/EBA preferences reflect the enhanced competence of customs authorities and origin-certifying institutions (and declined compliance costs for exporters) in Southeast Asia, and the rates do not support the case that ASEAN countries will be overwhelmed by the administrative complexity brought about by the prospective EU-ASEAN FTA. Actually, ASEAN could be incentivized to adopt European-style ROOs proactively for two reasons.

Second, while ROOs tend to force some firms to adopt a costlier input mix for their finished products to qualify for preference, they also act to assist the development of vertically integrated supply chains within the boundary of the FTA to ensure that it is not just low value-added activities that are undertaken. Such development externality is in line with ASEAN’s own regional integration strategies, resonating particularly with the ASEAN Economic Community’s aspiration of building a single production base in Southeast Asia.

Nevertheless, ASEAN can capitalize on these opportunities provided that it engages in free trade with the EU en bloc. After securing the first “building block” to a future inter-regional agreement with ASEAN, Brussels should move swiftly to wrap up ongoing talks—particularly with Malaysia, Thailand and Indonesia. After all, looking ahead, the EUSFTA is an entrée in anticipation of a main course that should come sooner rather than later.

This is a revised version of a piece that first appeared on the EU Centre in Singapore website.