Will the New Silk Road be Paved with Riches? 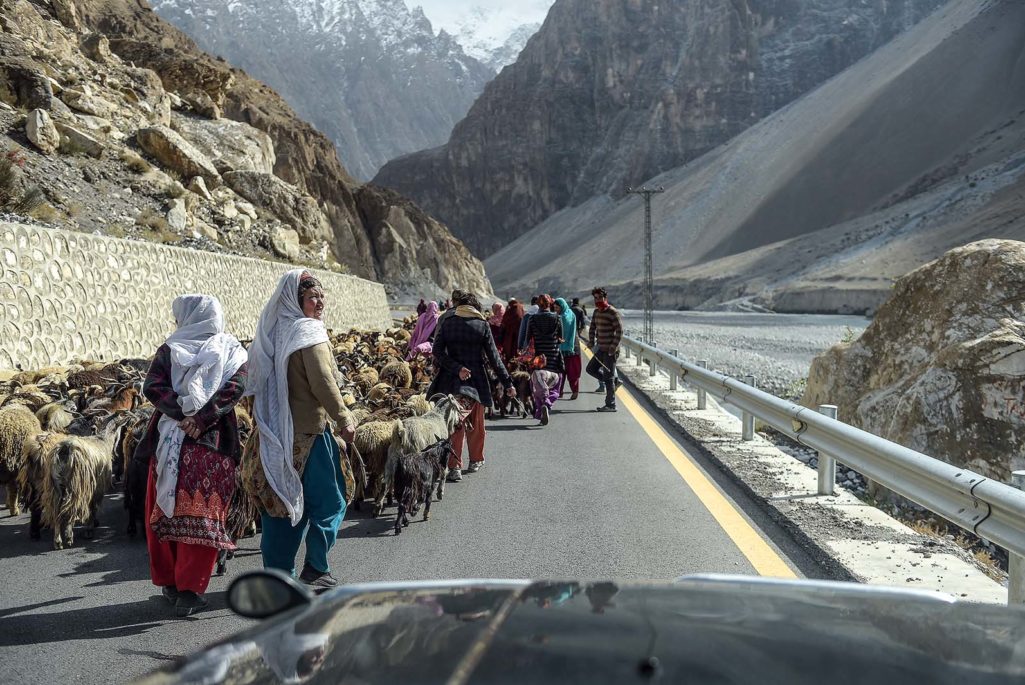 Local people control their sheep and goats at the Karakoram highway in Gulmit village of Hunza valley in northern Pakistan. A glossy highway and hundreds of lorries are transporting Chinese workers by the thousands as the new Silk Road is under construction in northern Pakistan.

Until recently, there was “responsible competition” between two transcontinental economic arrangements: the U.S.-led Trans-Pacific Partnership (TPP) and the China-initiated Belt and Road Initiative (BRI). The BRI will surely come to the fore in 2017 as the TPP fizzles out due to the incoming U.S. administration likely embracing retrenchment rather than engagement.

The BRI, consisting of the Silk Road Economic Belt and the 21st Century Maritime Silk Road, draws inspiration from the historical imageries of the millennia-old overland trading routes traversing the Eurasian landmass and the ancient sea lanes linking China with the Middle East and East Africa via Southeast Asia that dated back to the 15th century. It could cover a geographical area that is home to 4.4 billion people who produce more than half of global GDP and preside over three-quarters of known energy reserves.

There is little wonder why China would invoke, or even mildly mythologize, its glorious past to serve contemporary policy interests, but the BRI is not an empty political slogan. It is a long-term, multi-pronged international economic strategy aiming to link Afro-Eurasian economies through policy coordination, facilities connectivity, trade facilitation, financial integration and people-to-people exchanges.

When China, in 2013, broached the idea of revitalizing the routes of commercial and cultural exchanges explored by the “diligent and courageous” silk traders of Eurasia, Beijing had two major domestic policy objectives in mind.

First, the BRI is an outward-looking national strategy for hinterland development. In the past decades, China was almost synonymous with ‘growth,’ but China’s socioeconomic progress is highly unequal (the country becomes poorer as one goes west). One explanation of the regional disparities is the availability of extensive, inter-modal infrastructural networks—expressways, high-speed railways, air and sea ports—along eastern China’s coast that allow ‘Made in China’ goods to be transported all over the world. The BRI is devised to close this infrastructural gap in the hope that the ensuing inland economic integration with neighboring markets will catalyze economic development in its relatively backward western and central provinces.

Developing Asia alone needs $8 trillion in infrastructure investment to accommodate its growth until 2020.

The other geo-economic rationale behind the BRI relates to China’s Malacca Dilemma. The term refers to China’s over-reliance on energy imports transiting the Strait of Malacca, a strategic choke point that is often patrolled by the U.S. Navy. According to a Pentagon report, over 80 percent of Chinese maritime oil imports and 30 percent of natural gas imports have to pass through the Malacca Strait. To buttress its energy security, China is determined to circumvent the narrow strait by developing more reliable, alternative land and maritime routes for energy imports along the Belt and Road. A case in point is the planned Gwadar-Kashgar pipeline, which is envisioned to carry one million barrels of oil directly to China’s Xinjiang province every day.

Despite the overarching domestic motives, the BRI has an explicit international dimension. It places due emphasis on connectivity, inclusiveness and multilateralism when isolationism, xenophobia and unilateralism are becoming increasingly commonplace in other parts of the world. Specifically, the BRI provides a timely boost to the wobbling world economy and ailing globalization sentiment through infrastructure, investment and policy channels in the context of win-win cooperation.

Infrastructure is essential for economic vitality and unimpeded trade and investment, but the financing needs of infrastructure development are daunting across Eurasia. Developing Asia alone needs $8 trillion in infrastructure investment to accommodate its growth until 2020. On the other hand, Europe’s public spending on infrastructure stagnated in the shadows of financial crises, austerity measures and a deflationary economic outlook, shrinking to $449 billion in 2015—around 6 percent less than in 2009.

The BRI is China’s policy response to plug the funding shortfall. It establishes a multilateral platform for leveraging China’s core competences in infrastructure construction and pooling the region’s foreign reserves to overcome logistical barriers to trade and development. According to Bruegel economists, a 10 percent reduction in railway, air and maritime transport costs could translate to increases in exports of 2 percent, 5.5 percent and 1.1 percent respectively for countries along the routes. In total, China reckons that the BRI will have a cascading effect of creating some $2.5 trillion in extra trade among countries in the loop.

Also riding the Silk Road is China’s booming outbound investment as China is transitioning from the world’s largest goods exporter to the world’s largest capital exporter. China’s BRI-related foreign direct investment (FDI) grew 23.8 percent year-on-year in 2015, and was up 60 percent in the first half of 2016, outpacing the growth in China’s overall outbound non-financial investments. There is a general consensus that China’s FDI stock will reach a staggering $2 trillion by 2020, more than three times the level at the end of 2014, and then $4 trillion in time.

Taking advantage of the Chinese investments that arrive under the banner of BRI, participating countries can modernize their economies, lock in key structural reforms, tap into new sources of growth, raise productivity and increase reciprocity of trade patterns. And as labor and land costs go up in China, Chinese enterprises have started to invest in manufacturing and industrial capacities in neighboring countries. This westward and southward flow of investment will likely ensure that developing countries reap the long-term benefits of the BRI and emerge as integral parts of global value chains, rather than mere transit points. Of equal importance is that competition for Chinese capital will encourage BRI countries to adopt better economic policies, cut red tape, improve investment climate and strengthen coordination with adjacent countries in a race to the top.

Moreover, the network-based conceptualization of the BRI is more inclusive than institutional integration projects such as the TPP where membership, rules and principles, and benefits and obligations are legally specified since day one. It is telling that China abandoned the popular nickname OBOR (One Belt, One Road) and showed reluctance to publish an official list of involved countries in an attempt to promulgate its intention of engaging as many countries as possible. Except for a few geographical considerations, there is virtually no restriction as to whether a particular country can or cannot take part in this open-ended, collaborative development project. The BRI’s openness contrasts sharply with the exclusiveness and discriminatory nature of the TPP whereby non-members have to comply with so-called high standard trade rules—in which they have no say—before they can be admitted.

Precisely because of its openness and inclusiveness, the BRI will always be a work in progress that cannot be defined in its entirety. Interested countries and companies should proactively shape the agenda of the BRI by identifying, developing and proposing projects that can be bracketed under the rubric of BRI, pondering how to cash in on those commercial opportunities while, in the spirit of the ancient Silk Road’s trailblazers, contributing to BRI’s vision of a closely integrated Afro-Eurasia with new and enhanced physical, commercial, cultural and digital ties.

Tom Friedman Author, Reporter and Columnist for The New York Times
URL: https://www.brinknews.com/will-the-new-silk-road-be-paved-with-riches/
Get ahead in a rapidly changing world. Sign up for our daily newsletter. Subscribe
​​