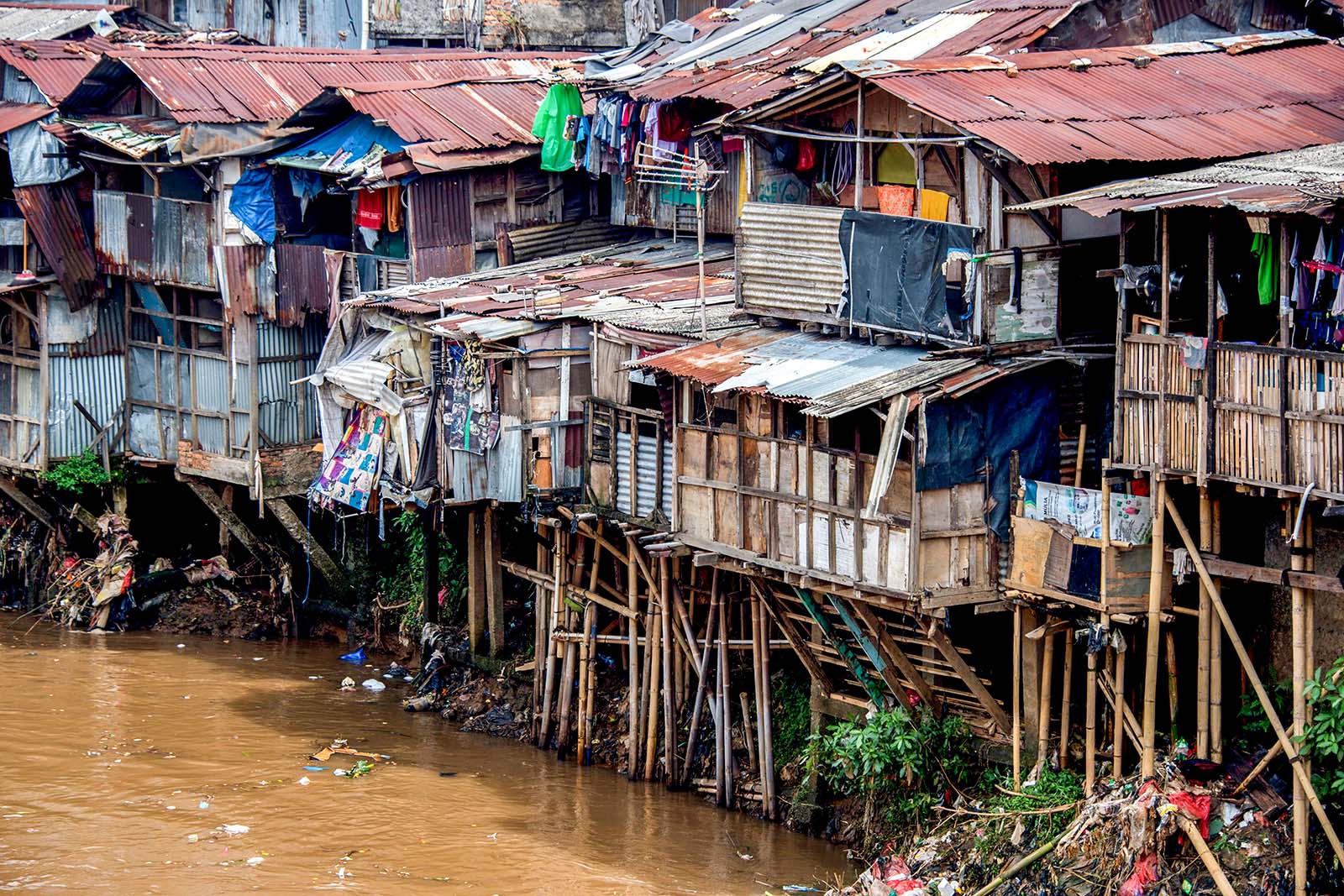 Shanty houses in downtown Jakarta. Across East Asia and the Pacific, an estimated 250 million people are living in slums.

Better jobs, higher salaries, and improved access to basic services—the bright lights of cities seem to promise these and more. But for millions lured to these centers of innovation and prosperity, cities can also lead to a life of squalor. Access to safe drinking water or sanitation may be poor or nonexistent. Makeshift homes may flood every time it rains; and keeping families fed may become a daily struggle.

Across East Asia and the Pacific, an estimated 250 million people are living in slums. This is the highest number among any region in the world because of the sheer size of populations in large countries, such as China, Indonesia, and the Philippines.

As city leaders and planners from around the world convene at the World Urban Forum in Malaysia to discuss implementing the “New Urban Agenda”, addressing inequality and inclusion must be at the heart of this agenda—and it must be an integral part of urban planning for governments across all regions.

In East Asia and the Pacific, fast-paced growth has transformed economies, lifted millions out of poverty, and kick-started rapid urbanization. But as cities multiply, so do the challenges in keeping up with commensurate planning and investments in physical infrastructure, affordable housing, and transportation.

Consequently, low-income residents resort to living in poor conditions and in locations that are vulnerable to environmental hazards, such as hazardous waste, or to natural disasters, such as flooding.

Widening inequalities follow and can undermine the sustainability of economic growth. These inequalities slow poverty reduction, create divisions among cities’ populations, and can breed conflict and crime.

As outlined in the recent World Bank East Asia and Pacific Cities: Expanding Opportunities for the Urban Poor report, there are solutions for these multidimensional aspects of urban poverty and inequality, both at the city and country level.

Many of these solutions draw from Singapore, Korea, Japan, and Malaysia—countries that have sustained robust economic growth and reduced urban poverty and inequality through investments in urban planning, infrastructure, and service provision. They have targeted social programs and fostered participation by citizens. As a result, these countries enjoy a greater degree of shared prosperity.

Providing equitable access to infrastructure and basic services positively impacts health, productivity, and welfare—and should be a priority for our cities.

Other countries are following suit. Indonesia and Vietnam are carrying out robust programs for upgrading slum communities, and China is effectively using rental subsidies to provide housing for low-income residents.

These countries show that a sustained effort can reduce inequality, create more inclusive cities and strengthen harmony in communities.

An inclusive-cities approach relies on equitable policies that do not leave groups behind. These policies fall into three categories: economic inclusion, spatial inclusion and social inclusion.

Economic inclusion means enacting policies that connect the urban poor with job markets, as has been done through the modernization of road networks in Hanoi and through linking nonmotorized transportation to bus rapid-transit systems in Guangzhou, China.

Other approaches include improving access to credit and laws that protect informal workers and build resilience to external shocks, such as disasters, that can easily wipe out a family’s livelihood and savings in a moment. Disaster planning in Can Tho and Dong Hoi in Vietnam and early warning systems in China and in Jakarta have been important in preventing shocks, particularly among the urban poor.

Lastly, social inclusion—that is, recognizing the rights of all residents regardless of identity, income status, ethnic status, or place of origin—may sound like the less apparent key ingredient. Local governance and citizen participation may seem to be a given in successful cities; however, it is often an overlooked element in transparent and fair decision-making and successful implementation of programs and policies on the ground. If governments continue to overlook vulnerable groups, such as low-income children, the disabled, or the elderly, inequality will persist.

Countries such as the Philippines and Indonesia have shown that it is possible to provide successful targeted social safety net programs to reach those urban residents who are in greatest need.

More inclusive and livable cities are achievable goals, and East Asia and the Pacific face an opportunity to replicate best practices in urban planning across the region. Governments, both national and local, the private sector, and citizens all have a role to play.

As city leaders and planners conclude the World Urban Forum to define the steps forward for our cities and our collective future—let us act now to build inclusive cities in East Asia.

Victoria Kwakwa is the World Bank’s vice president for the East Asia and Pacific, overseeing a portfolio of more than $32 billion in loans, grants, credits, and trust funds across 23 countries. Ms. Kwakwa leads the World Bank’s strategy in East Asia Pacific which focuses on: inclusion and empowerment; jobs and private sector-led growth, governance and institutions, infrastructure and urbanization, climate change and disaster risk management, as well as the cross-cutting themes of gender, fragility and conflict, and poverty analytics.

Bart Édes Distinguished Fellow at Asia Pacific Foundation of Canada
URL: https://www.brinknews.com/expanding-opportunities-for-the-urban-poor-in-east-asia-and-the-pacific/
Get ahead in a rapidly changing world. Sign up for our daily newsletter. Subscribe
​​