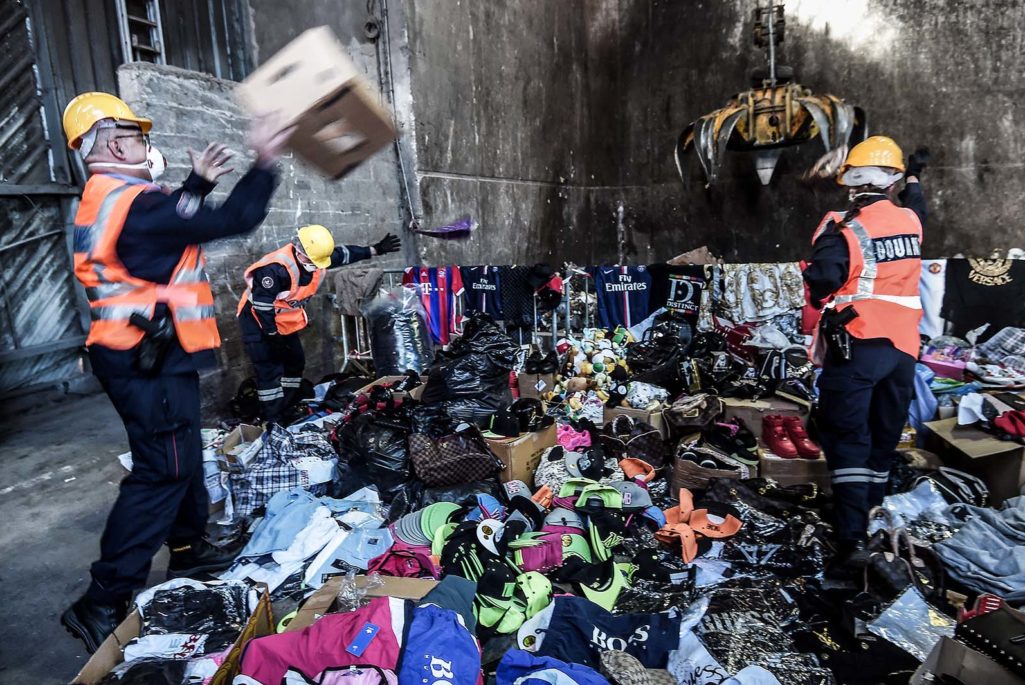 Customs officers throw seized counterfeit goods into a 'Destructor' at the waste incineration plant in Schweighouse-sur-Moder, eastern France, as part of a nationwide day of destructions of counterfeit products.

Counterfeit and pirated goods cost the global economy as much as $461 billion a year, according to a recent report. That equates to 2.5 percent of world trade or the entire annual economic output of Austria.

The effects on the European Union are even more dramatic, where fake goods amounted to up to 5 percent of all imports, or as much as $116 billion. “This suggests that the relative impact of counterfeiting is twice as high for a group of developed countries, such as the EU, than it is for the world as a whole,” the report says.

The report is based on data from almost 500,000 customs seizures from 2013 (the latest data available).

The enormity of the problem “highlights that right holders, governments and the formal economy as a whole suffer from significant economic and social losses,” the report says. “It also gives an idea about the potential financial revenues collected by criminal networks that are behind such trade,” which also include known terrorist groups.

“These practices have negative effects on the sales and profits of affected firms, while also having adverse revenue, economic, health, safety and security effects for governments, businesses and consumers,” the report says.

The issue of fake goods is a major challenge for an innovation-driven global economy and is a particular concern for intellectual property (IP) owing to its propensity to dampen innovative research and design work. Counterfeit goods, such as toys, pharmaceuticals or spare parts, “pose significant health and safety threats” for consumers, the report says.

The problem of counterfeit goods is getting worse with its economic impact having more than doubled since the last estimates were published in 2008. At that time the OECD estimated that fake goods accounted for up to 1.9 percent of world imports, or $200 billion.

Everything from footwear to luxury goods to spare parts is subject to counterfeiting. “Any product for which IP adds economic value to rights holders and that creates price differentials becomes a target for counterfeiters,” the report says. Any IP-protected product is a target. Records indicate items such as fresh strawberries, bananas, cinnamon and coconut oil have been the victims of counterfeiting.

The market for counterfeit goods is divided into two parts: demanders and suppliers. Demanders are most often consumers, but companies fall into that category as well “where a given counterfeit or pirated product is an intermediary component in the production process,” the report says. And all markets are targeted, including secondary markets in which consumers knowingly purchase the fakes, and primary markets where the buyers are deceived, believing they are buying the legitimate products.

There are no ‘Clean’ Regions When It Comes to Counterfeits

Fake products come from all economies on all continents; however, middle-income and emerging economies tend to be the major players in this illicit trade, either as transit points or as producers. China is the undisputed king of counterfeiters.

Criminal networks are evolving and evaluating the risks while deploying their own risk management practices. Many transit points encompass countries with weak governance and have a “strong presence of organized criminal or even terrorist networks,” the report says. An analysis of customs seizure data reveals that traffickers are changing tactics as they seek to exploit new governance gaps. “This reflects the ability of counterfeiters and criminal networks to quickly identify weak points and gaps and consequently leverage opportunities for arbitrage,” the report says.

Few brands escape the grip of counterfeiting. Many are located in OECD countries, primarily in the United States, Italy, France, Switzerland, Japan, Germany, the UK and Luxembourg.

Ironically Chinese manufactures have also been the victims of counterfeiters. About 1.3 percent of seizures of fake goods are violations of the IP rights of Chinese companies, the report says. “This contrasts sharply with China being at the top of economies of provenance in counterfeit and pirated products,” the report says. “It also indicates a very strong threat of counterfeiting and piracy that undermines the innovative efforts of Chinese companies relying on knowledge-based capital and using IP rights in their business strategies.”

Surprisingly, the data reveals that traditional mail packages are the favorite means of shipping fake goods. Between 2011 and 2013, an average of almost 62 percent of fake goods seized worldwide were postal shipments. Air and sea transport followed with slightly more than 20 percent and 9 percent respectively. Seizures of vehicle transport were about 7 percent. In addition, the size of the shipments tended to be small: fewer than 10-item shipments accounted for about 43 percent of all seizures.

The volume of small shipments via postal departments “seems to be related to the recent fast growth of the Internet, and particularly e-commerce solutions,” the report says. The role of the Internet in facilitating the counterfeit goods trade “is nuanced,” the report says. There’s a double-edged-sword effect taking place. The online environment proves attractive to counterfeiters and pirates because of its anonymity, flexibility or market scope, the report says. “On the other hand, for rights holders, e-commerce has become an additional channel of distribution for genuine products, which to some consumers may reduce the relative attractiveness of infringing goods,” the report says. “The online environment is very dynamic and industry specific, more research is needed in this area to fully understand the issues involved.”

Robert Atkinson President of the Information Technology and Innovation Foundation
URL: https://www.brinknews.com/fake-goods-syphon-461-billion-out-of-world-economy/
Get ahead in a rapidly changing world. Sign up for our daily newsletter. Subscribe
​​