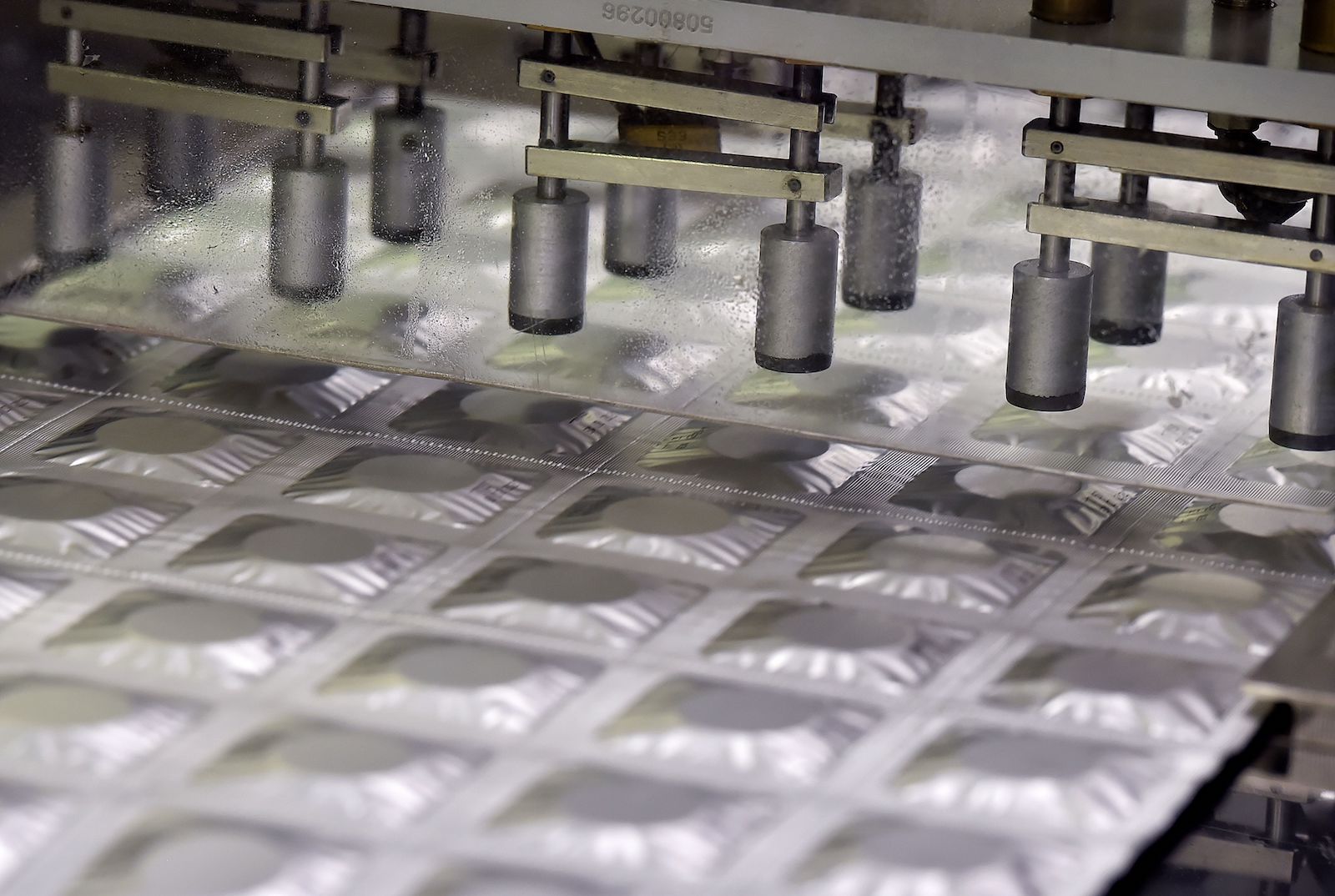 Tablets are pictured on the production line of a pharmaceutical plant in Agen, southwestern France. The pharmaceutical market worldwide will witness a significant slowdown over the next five years.

The pharmaceutical market worldwide will witness a significant slowdown over the next five years. The market is expected to surpass $1.5 trillion by 2023, according to a recent report by the IQVIA Institute for Human Data Science, although growth will hover between 3 and 6 percent as opposed to the 6.3 percent growth rate registered over the past five years. “The key drivers of growth will continue to be the United States and ‘pharmerging markets,’ with 4-7 percent and 5-8 percent compound annual growth, respectively,” the report says.

In 2018, global medicine expenditure peaked at $1.2 trillion. It is expected to surpass $1.5 trillion by 2023. Over the next four years, developed markets and their adoption of newly launched innovative products will contribute significantly to global medicine spending growth. To a lesser degree, it will also be driven by better accessibility and medicine use in emerging pharmaceutical or pharmerging markets. Interestingly, China alone will account for an equivalent spending as that of five major European markets combined. In fact, it is the largest pharmerging market globally and is expected to clock $140-$170 billion by 2023.

Among developed markets, medicine expenditure in the five major European markets will decline by 1-4 percent. This is, again, a significant decrease when compared to the 3.8 percent growth recorded over the past five years. “All pharmerging markets will see slower growth in the next five years than in the past five as the economic growth and health care access expansions of the past contribute less to growth,” the report says.

China registered $137 billion in 2018, making it the second-largest pharmaceutical market globally. It will, however, witness a slowdown to 3-6 percent between now and 2023, from a 19 percent CAGR in 2008-2013 and an 8 percent CAGR in 2013-2018. This is on account of central government reforms that seek to ensure insurance access to urban and rural residents alike. Hospitals and primary health care services are also receiving an upgrade, and efforts are underway to ensure cost optimization.

China’s economic growth has enabled higher incomes, and an increasing number of Chinese patients are therefore now able to access and afford medicines. Furthermore, to ensure affordability, the Chinese government has prioritized managing drug pricing through the use of an Essential Drug List and a National Reimbursement Drug List.

For many years, Japan ranked second in the branded pharmaceutical market. This was mostly because of an absence of policies that promoted the use of generic drugs. “Growth has been consistently lower than other developed markets through a system of biennial drug price cuts,” the report says. In general, the Ministry of Health Labor and Welfare has monitored the spending trend, and it has, in recent times, prioritized the use of innovative medicines. According to the report, “The greater savings from generics is enabling a greater shift to specialty medicines without overall budget impact, and the share of specialty spending is expected to rise from approximately 30 percent in 2018 to 41 percent in 2023.”

The overall medicine spending in Japan amounted to $86 billion in 2018. Over the next four years, however, there is a slowdown expected, from -3 to 0 percent through 2023. This is attributed to changes in exchange rates, higher use of generic drugs and an offset caused by the adoption of new offerings. Specialty drugs, including oncology medicines, are expected to be a key growth driver. Although Japan’s population is declining, its aging population will also contribute to medicine spending growth since there is an increase in per capita medicine use.

Life science companies are seeking to actively invest and develop AI, machine learning and deep learning programs between now and 2023. These are expected to yield breakthroughs that are likely to result in the discovery and development of medicines. State-of-the-art technologies, including tools that can modify cells and genes, are currently under development. These will enable the treatment of limited patient populations and will raise important questions for health care stakeholders, considering the cost and accessibility of such treatment options.

Separately, in the next five years, more emerging biopharma companies (EBP) will launch new medicines, and it is expected that more than one-third of drugs launched will be brought to the market by EBP companies. This will be largely due to shifts in strategy and the rising absolute number of active R&D compounds.

The report highlights that “the next five years will likely pose a similar scale of challenges [to biopharmaceutical companies]. With payer actions on prices looming, it remains to be seen whether companies can repeat their past successes in terms of revenue and cost management.”