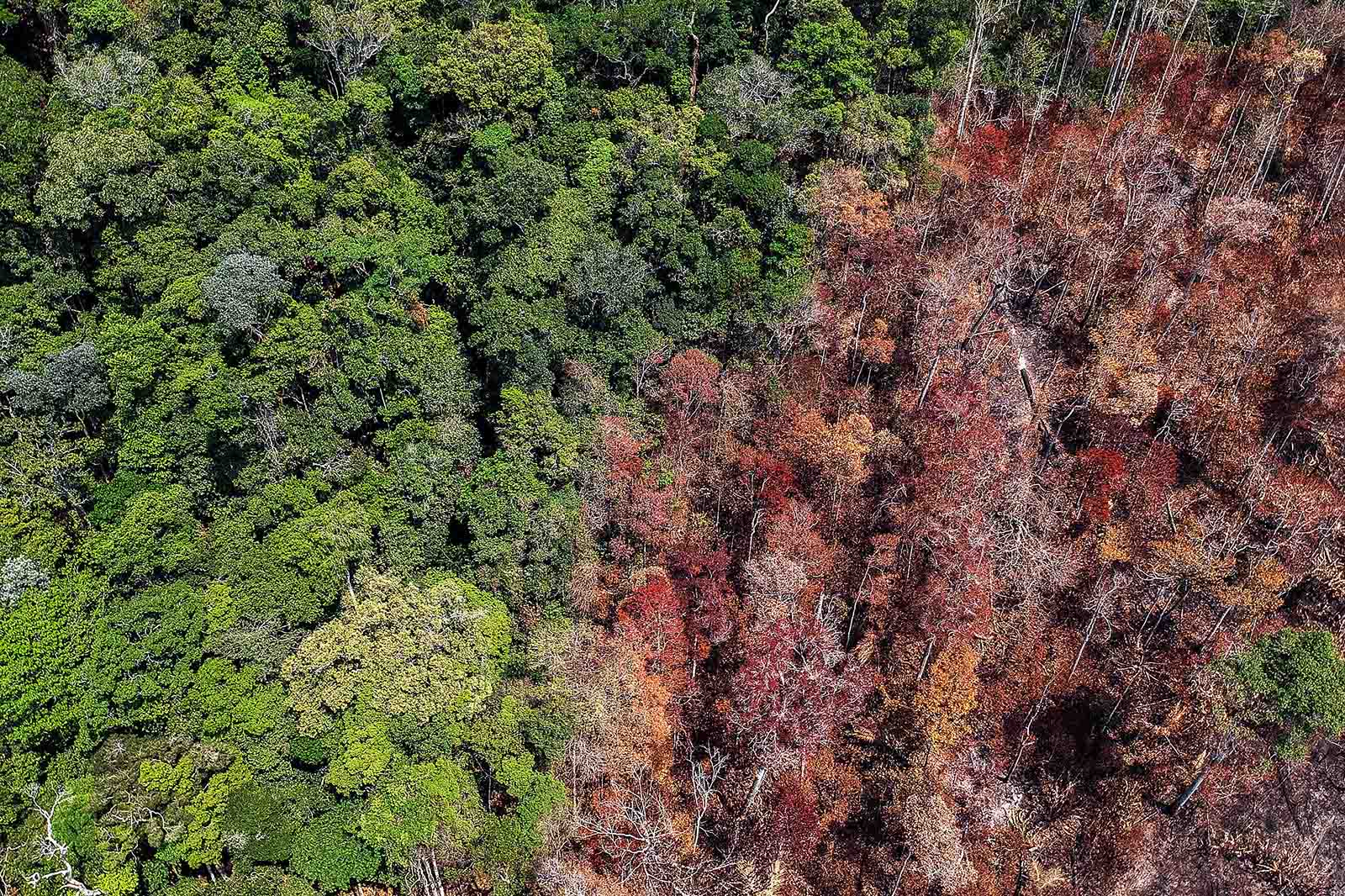 Aerial view of burnt areas near Moraes Almeida, -a town along a section of the trans-Amazonian highyway-, in Brazil. Amazon dieback would release billions of metric tons of carbon into the atmosphere, accelerating climate change and taking us toward the point where a disastrous “domino-like cascade” of Earth-system tipping points becomes possible.

Around the world, central banks are scrambling to tackle the economic and financial damage wrought by the coronavirus pandemic, announcing interest rate cuts and asset purchase programs to shore up economies and a range of regulatory and supervisory measures to maintain financial stability and ensure liquidity.

COVID-19 clearly illustrates how destabilizing risks from outside the financial system can be when they cascade through markets and economies. It also underlines the importance of preparedness among central banks. Indeed, until the current crisis escalated, central banks had been pondering the question of how they should prepare for exogenous risks to financial stability posed not by pandemics or terrorism, but by climate change.

Membership of the Network for Greening the Financial System — a club of central banks and supervisors focused on integrating climate risks into regulatory frameworks launched in December 2017 — had grown to 59 authorities by the start of March 2020. The chairman of the Federal Reserve has indicated that the Fed is likely to join, while active members such as the Bank of England and the Banque de France have recently announced climate stress tests of their financial sectors. Earlier this year, the Bank for International Settlements (BIS) — often referred to as the “central bank for central banks” — published a report on the risk of so-called “green swan” climate events, arguing that these could cause the next systemic financial crisis.

Green swans are based on Nassim Nicholas Taleb’s original concept of a black swan — an unexpected event with extreme impacts that can only be explained in retrospect. The BIS argues that climate change will likely lead to complex, hard-to-anticipate shocks fitting this description: As climate impacts become increasingly severe, so-called earth system tipping points are breached, and governments and societies scramble to respond, potentially in chaotic and economically destructive ways.

By its very nature, the anatomy of a green swan cannot be known fully in advance. It may be possible to anticipate the kinds of events that may trigger a catastrophic risk cascade and the ways in which impacts may propagate through markets, along supply chains and across borders, but how things will play out is essentially unknowable. The complexities, interdependencies and uncertainties are simply too great. Nevertheless, it is possible to make some reasonable guesses about the kinds of crises that may occur in a warmer world.

The Amazon basin accounts for a quarter of the carbon absorbed by the world’s forests, but deforestation rates are rising and scientists have recently cautioned that once 20% to 25% of the forest is lost, it could pass a critical tipping point where climate change fuels a vicious cycle of drought, fire and canopy loss that cannot be stopped. Today, forest loss stands at 17%, and scientists are warning that the tipping point could be breached in the next few years.

If this happens, the consequences will be severe. The Amazon shapes the weather in Brazil, and loss of rainfall could cost the economy $3 trillion — but the damage would not stop there. Brazil is one of the world’s major breadbaskets, and a sudden decline in agricultural output would have serious consequences for international food markets, where recent price spikes have been implicated in global food riots and identified as contributing to the initial protests that became the Arab Spring.

Green swans are shrouded in deep uncertainty, but this does not mean they cannot be prepared for.

Disruption would reach far beyond food markets, however. Amazon dieback would release billions of metric tons of carbon into the atmosphere, accelerating climate change and taking us toward the point where a disastrous “domino-like cascade” of Earth-system tipping points becomes possible, as ice sheets and permafrost melt and ocean and atmospheric circulation patterns change.

Sea levels are rising faster than expected, and uncertainty about the extent of future sea-level rise is growing. One recent paper found that sea levels could rise by more than two meters by the end of the century on a business-as-usual trajectory — more than double the estimate of the IPCC in its last assessment report. This would consume nearly 2 million square kilometers of land and displace 187 million people. By the middle of the century, persistent flooding from higher seas could result in the regular inundation of land currently home to 340 million people. This could result in severe financial losses as property values collapse and real estate becomes uninsurable and lead to mass migration, with unknown socioeconomic and political consequences.

Minimizing the risk of green swans requires that global net emissions peak immediately and reduce to zero by the middle of the century. This would require the ambition of national emissions reduction targets to quintuple, necessitating a dramatic step change in policies and regulations that would impose inevitable costs on high-carbon sectors with knock-on consequences for the financial sector. A recent study by global management consultancy Oliver Wyman estimated that a $50 per metric ton carbon tax could generate $1 trillion of credit losses — significant, though smaller than might typically be expected in a global recession.

But the costs would be far greater if governments scramble to close the gap with chaotic, poorly coordinated interventions. And this is exactly what could happen if mounting climate impacts lead the public to demand urgent action, forcing governments to respond with panicked, ad hoc policy interventions that destabilize financial systems.

This raises the possibility of successive green swans if catastrophic changes such as Amazon dieback or coastal inundation trigger a cascade of social and economic impacts that alarm the public and panic governments into a disorderly transition, ultimately precipitating a second, compounding round of economic and financial impacts.

Resilience in the Face of Deep Uncertainty

Green swans are shrouded in deep uncertainty, but this does not mean they cannot be prepared for. Exploring plausible green swan events creatively through the use of scenario exercises or simulation games allows organizations to consider the kinds of impacts that might emerge, how they might build resilience to them and what strategies might be needed to manage through an unfolding crisis. These techniques can be valuable in themselves, as they are likely to surface particular risks — from climate impacts or policy responses — that may crystallize regardless of whether a full blown green swan event occurs.

As central banks, governments and corporations struggle to manage through the coronavirus pandemic, green swan simulations are unlikely to be high on many agendas. But the current crisis will not last forever, and its aftermath may provide a useful opportunity to reflect on how governments, regulators and markets react in times of global crisis, generating insights applicable to green swans.

As it turns out, the BIS was wrong when it suggested that the next global financial crisis would be caused by a green swan. But on our current course, sooner or later, it is likely to be proved right.

Clarke Murphy former CEO of Russell Reynolds Associates
URL: https://www.brinknews.com/green-swan-climate-events-how-to-plan-for-the-unexpected-coronavirus-risk-environment/
Get ahead in a rapidly changing world. Sign up for our daily newsletter. Subscribe
​​