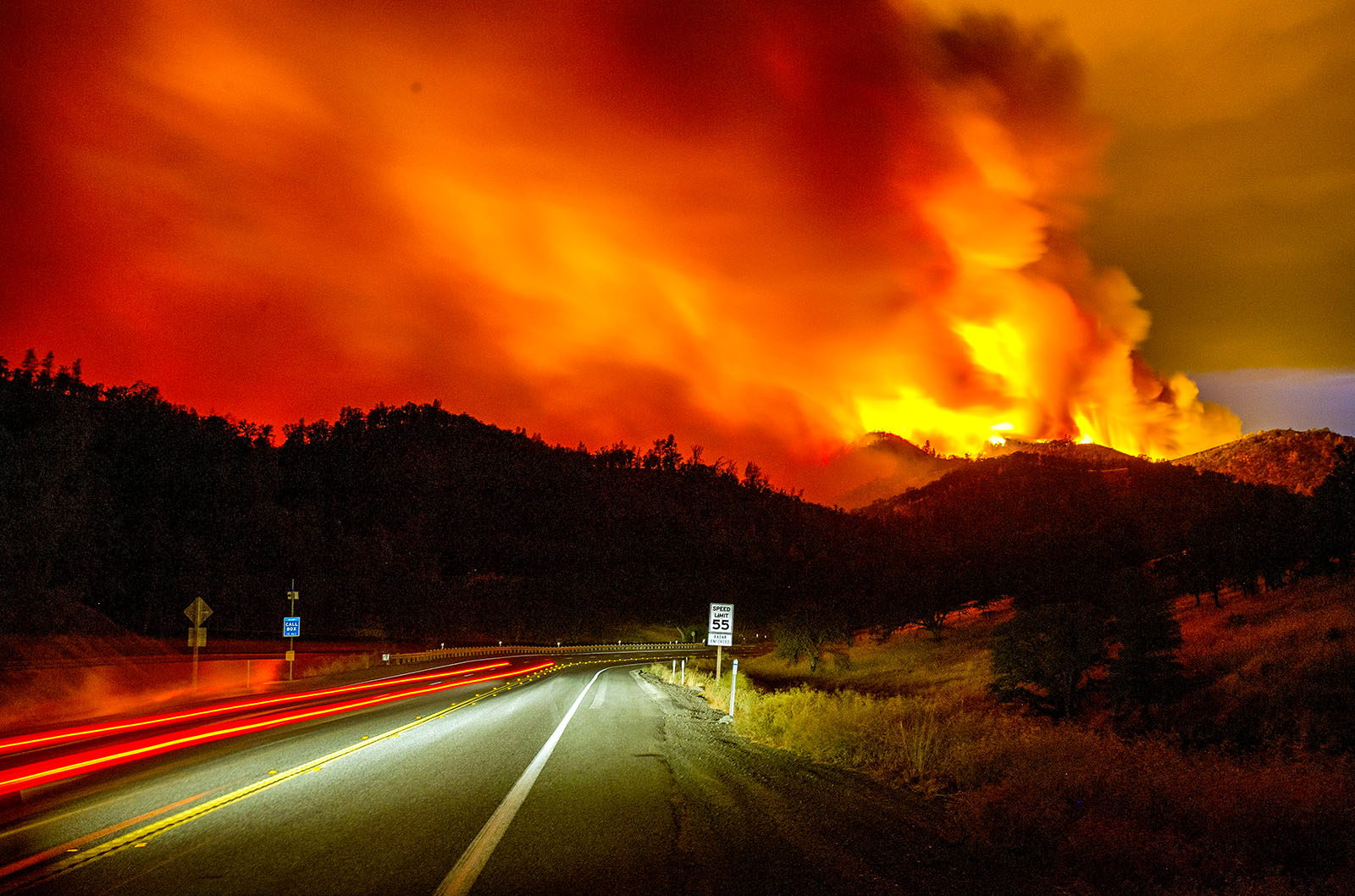 A huge plume of smoke rises into the air as the Rocky fire burns near Clear Lake, California. At the heart of the problem is the fact that higher temperatures and droughts are contributing to drier forests and shrublands that catch fire and burn more easily.

This summer, we have seen devastating climate-related disasters occurring across the world. Record-breaking wildfires are lasting longer and burning more land due to historic heatwaves and drier conditions.

Many believe that we have entered a fiery new normal. But the “new normal” framing — the idea that we have reached a new equilibrium — is misleading. Climate change and growing numbers of people and assets in fire-prone areas mean there is little chance that wildfire risk will stabilize in the foreseeable future, regardless of whether the last two years were outliers or the start of something more alarming.

Climate change is estimated to have lengthened fire seasons across a quarter of the world’s vegetated land surface. In the Western U.S., large fires are now almost seven times more likely to occur than three decades ago, and climate change is estimated to have almost doubled the forest area burned since 1984. In Canada, large fires are getting bigger and more frequent. Across large parts of Australia, extreme fire weather — hot, dry and windy days when the risk of bushfires peaks — is becoming more common.

At the heart of the problem is the fact that higher temperatures and droughts are contributing to drier forests and shrublands that catch fire and burn more easily. As climate change continues, these trends are likely to become more pronounced. Southern Europe could see the area burned by wildfire double by the end of the century. For parts of the Western U.S., a doubling of burned area or more could occur by mid-century. Similarly alarming forecasts have been made for Canada and Australia.

Exposure to Wildfire Is Increasing

Climate change is only part of increasing wildfire risk. As urban developments around the world creep further into wildlands, the number of people and value of assets exposed to fire-prone areas is increasing. The U.S. has given a name to the frontier of urban sprawl — the wildland-urban interface — and between 1990 and 2010, the wildland-urban interface’s area in the U.S. expanded by a third, and its housing stock grew by over 40%.

Some of the most rapid growth has been in the most fire-prone areas. In California — the epicenter of wildfire activity — the so-called wildland-urban interface has expanded by 60% since 1970 and now contains 4.5 million homes. Though less well-documented, similar patterns are discernible in other high-risk areas, such as Southern Europe and Australia.

On a global scale, urban land area is expected to triple between 2000 and 2030. Much of this expansion will happen in Africa and Asia. Many African and Asian countries already experience significant wildfire activity, but this has been declining due to the adoption of modern agricultural practices and the emergence of large-scale fields and pastures that create breaks in fuel sources such as forests and shrublands. In such places, future wildfire risks are hard to anticipate — they will be shaped by patterns of climate change, urban development and agricultural development. But the rates of population growth and economic growth mean the stakes are high. In the future, wildfire may no longer be something that happens only in remote areas far away from population centers.

Insurance can’t stop wildfire activity from increasing, but it can dissuade us from moving into areas likely to catch fire.

Insurers and Utilities Are Especially Vulnerable

For businesses that operate in wildlands or on their margins, increasing wildfire activity implies increasing risk. Wildfire can damage assets, interrupt business operations and disrupt supply chains. Commonly affected industries include the extractives sector, forestry, agriculture and tourism. California’s recent bouts of wildfire have harmed its wine and horticulture sectors and deterred tourists. In 2016, the Fort McMurray fire became the costliest disaster in Canada’s history, forcing the evacuation and closing of a number of oil production sites, creating consequences for supply that rippled through international markets.

However, add in the compounding trend of increasing exposure, and two sectors stand out as particularly affected: insurance and electrical utilities.

Electrical utilities run the risk that their assets start a fire. Almost half of the catastrophic Black Saturday fires that blazed across Victoria in 2009 were caused by electrical faults, resulting in Australia’s largest ever class action against the electricity company AusNet. Early this year, faced with potential liabilities of $30 billion from the 2017 and 2018 fires, the Californian utility PG&E filed for Chapter 11 bankruptcy protection.

The problem for electrical utilities is that windy days when weather conditions are perfect for fires are also the days when power lines are most likely to spark and start fires. Climate change means these days are becoming more likely in many parts of the world, while urban sprawl means power lines are being erected progressively deeper in the wildlands. As these trends continue, utilities will need to develop more resilient infrastructure and find ways to transfer their liability risks. Options include insurance, insurance-linked securities and establishing risk pools, possibly with some form of government guarantee.

Insurers also need to adapt to a future of more wildfire risk. The fires of 2017 and 2018 cost the sector more than $15 billion each year, forcing reinsurers to reconsider their view of wildfire losses as moderate and predictable, and prompting the world’s largest reinsurer to raise the prospect of large numbers of homes becoming uninsurable. Work is underway to improve wildfire models, and innovative risk transfer solutions have been developed, such as wildfire CAT bonds and parametric insurance products that pay out once a threshold level of burned area is reached.

Ultimately, maximizing uptake of market-based insurance among communities in fire-prone areas will be vital. Not only to help homeowners transfer risk, but also to reward them, through lower premiums, for taking action to reduce risk (such as fire-proofing homes) and to discourage them, through higher premiums, from building homes in risky areas.

Insurance can’t stop wildfire activity from increasing, but it can dissuade us from moving into areas likely to catch fire. Other priorities include building restrictions that prevent development in high-risk areas and building codes that stipulate fire-resistant construction. Forests need to be managed to prevent the accumulation of flammable deadwood and underbrush, for example, through so-called prescribed burns or by allowing low-risk fires to run their course. Adapting to wildfire will require all the tools in the tool box.

Sydney Hedberg Director at Marsh McLennan
URL: https://www.brinknews.com/as-wildfires-get-costlier-and-deadlier-insurers-and-utilities-pay-the-price/
Get ahead in a rapidly changing world. Sign up for our daily newsletter. Subscribe
​​