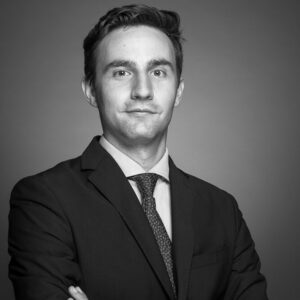 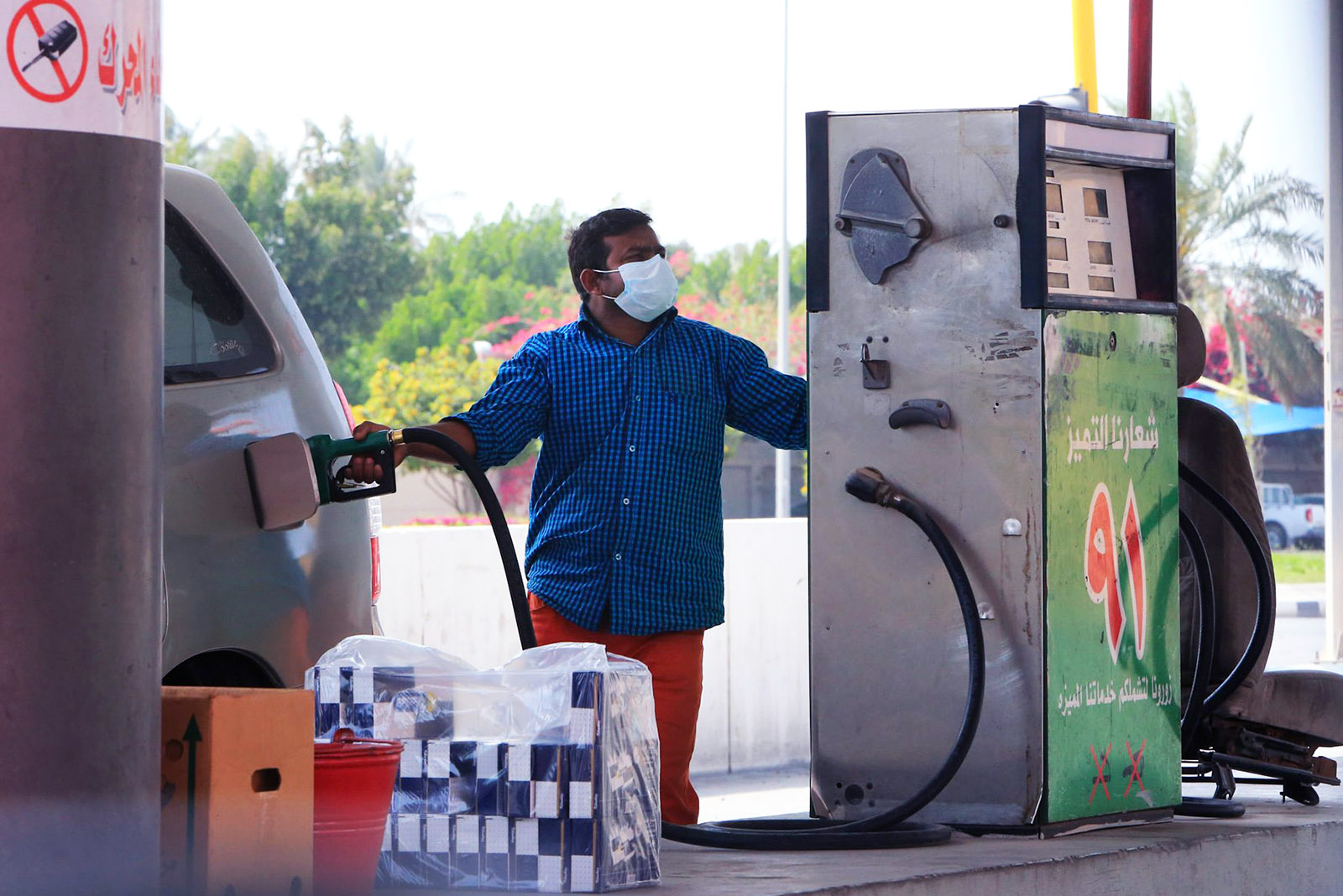 A worker wearing a protective mask fills a car tank at a petrol station in Qatif City, Saudi Arabia. COVID-19’s impact on both the global economy and consumer behavior has seen long-term world oil demand decline by 2.5 million barrels per day.

One of the greatest economic shocks in modern history — the COVID-19 pandemic — has disrupted business, mobility and everyday life, creating longer-term implications for the energy transition away from fossil fuels. It begs the question: “How has the transition’s trajectory been altered in the COVID-19 environment?”

In our view, although the shocks from the pandemic are leading to reductions in fossil fuel consumption and emissions, these alone will not put the world on track to meet the two-degree global warming target, bring forward peak oil demand or drive coal consumption to near-zero. Nonetheless, some bright spots may emerge from the pandemic: Many regions are seeking a green recovery (with Europe leading the charge), while the outlook for further renewables proliferation remains largely unchanged.

Following national lockdowns and severe changes in macroeconomic and consumer trends, the pandemic’s short-term impact on emissions has become clear. Indeed, the sharp decline in emissions this year was equivalent to the decline required by 2027 to fulfil a two-degree scenario (see chart). In turn, S&P Global Platts Analytics has forecast that CO2 emissions between 2020 and 2050 could reduce by 27.5 gigatons (GT), when compared to its pre-COVID outlook. 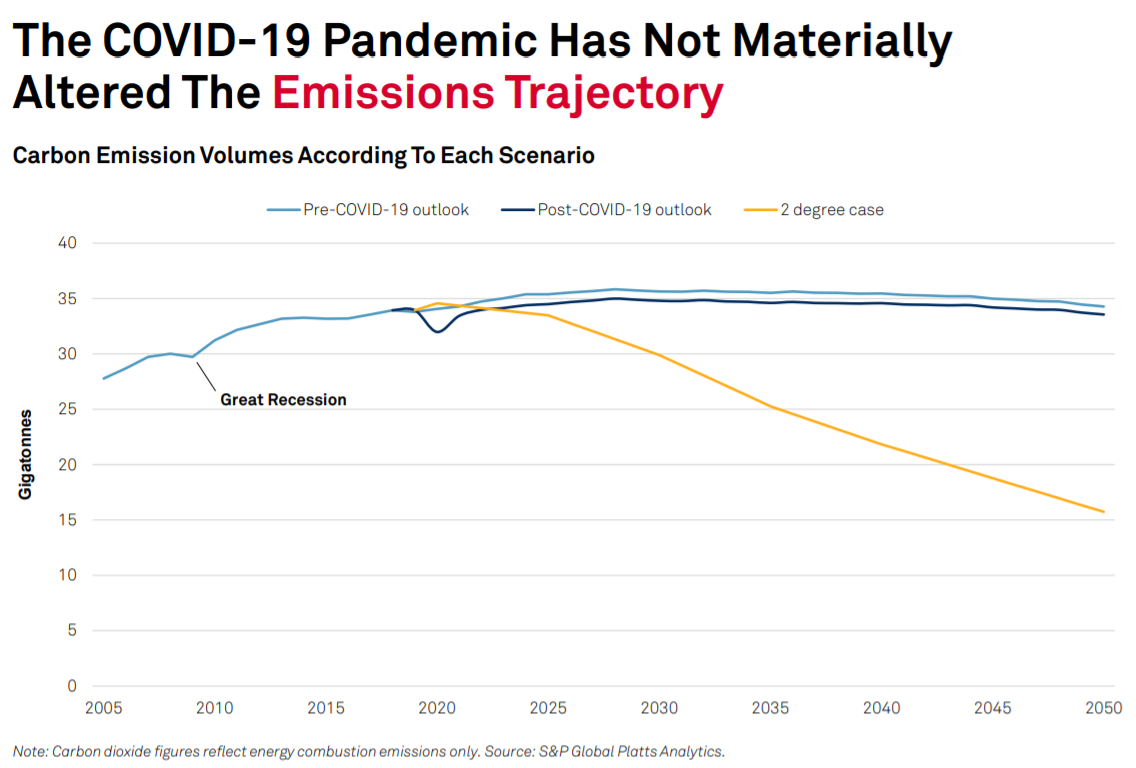 But, importantly, falling energy demand due to the pandemic alone cannot secure the two-degree target as stipulated in the Paris agreement. In fact, to do so would require more than 10 times that reduction over the next 30 years. Nevertheless, the pandemic has certainly illustrated that sizable emissions reductions are possible.

Among the most significantly affected fuels has been oil. COVID-19’s impact on both the global economy and consumer behaviors has seen long-term world oil demand decline by 2.5 million barrels per day (b/d), according to Platts Analytics, with unparalleled restrictions on mobility slashing demand by 20% in March and April 2020 alone.

However, this decline is not meaningful enough to alter the timing of peak oil demand, which remains projected for the late 2030s. Indeed, we still expect 75% of the drop in oil demand to return in 2021, with cheaper oil prices somewhat dampening appetite for electric vehicles.

The pandemic threatens the future of gas more than any fossil fuel over the next 20 years. Indeed, while we do not expect gas demand to peak over the next two decades globally — owing largely to continued industrial demand in Asia and the Middle East — our 2030 global outlook shows a more than 9% reduction in gas demand.

As a transition fuel, it is positioned awkwardly between the growing market penetration of renewables and lingering demand for coal in countries such as China, and reversing the deceleration of demand growth will be arduous without policy intervention. Of course, gas was already in a precarious position pre-pandemic, and as such, structural change to the industry will be perpetuated, if not slightly accelerated, by the COVID-19 pandemic.

On the other side of the energy spectrum, the outlook for renewables remains intact. Strong investor appetite and declining costs are enabling renewables to compete increasingly at grid-parity prices. As a result, the industry’s larger players are well-positioned to consolidate this industry.

Renewables are likely to be less of a focus for China and the emerging markets — with India suffering a reduction in renewables additions of 40% year-on-year for 2020 so far. However, Platts Analytics estimates that globally renewables additions have remained resilient on the whole and will continue to do so moving forward. Indeed, in parallel with decreasing demand for fossil fuels, renewables are expected to have a larger market share compared to our pre-COVID outlook.

Green Recoveries on the Horizon?

Focus, therefore, shifts to how policy can encourage a green recovery. Globally, we expect GDP to fall by 3.8% this year — a significantly higher decline than following the 2009 Global Financial Crisis (0.1%). The extent to which post-COVID stimuli packages dovetail climate policies will therefore be pivotal.

Still, the post-COVID stimuli are not equal in their “greening” commitments. For instance, the EU is skewing its policies to reinforce its wider commitment to working against climate change. Targeting a net-zero carbon economy by 2050, the EU has pledged EUR225 million of its recovery fund to the energy transition — 5% more of the EUR750 billion fiscal planned than previously set out in the January Green Deal.

Conversely, the United States’ stimulus policies have been agnostic about clean energy. To date, the Federal Reserve has not provided new support for green initiatives beyond existing tax incentives. That said, the outcome of the upcoming presidential election could still represent a drastic change in course.

In China, we can expect more carbon for now. President Xi has announced energy efficiency goals as part of China’s stimulus package — with a heavy focus on debt-financed infrastructure investments.

The upcoming build-out will be energy intensive, and so, the country’s transition to a lower-energy-intensity economy (fuelled increasingly by renewables) is likely to stall in 2020 and 2021 as a result. President Xi has also rolled back regulations on coal plants, partly for energy security reasons. But this should be seen alongside a recent and lofty commitment for China to become carbon neutral by 2060.

Meanwhile, India — among the worst economically hit by the crisis — is unlikely to focus much of its recovery on the energy transition, at least until the economy regains its footing.

So What Does This Mean for the Energy Transition?

While the pandemic has certainly provoked important progress for the energy transition — particularly with regards to fossil fuel consumption and emissions — we are still not on track to meet the two-degree target.

Instead, a mosaic of solutions beyond renewables and fossil fuels — including hydrogen and biofuels — are likely to play important roles in the decarbonization of the interconnected global energy system, while longer-term, more concentrated efforts from businesses and consumers could pave the way towards a greener future.

Massimo is an associate director within the Infrastructure Ratings group of S&P Global Ratings. Based in Paris, he covers a portfolio of high-profile companies in the utilities sector.