Alejandro J. Beutel
Researcher for Countering Violent Extremism at the National Consortium for the Study of Terrorism and Responses to Terrorism 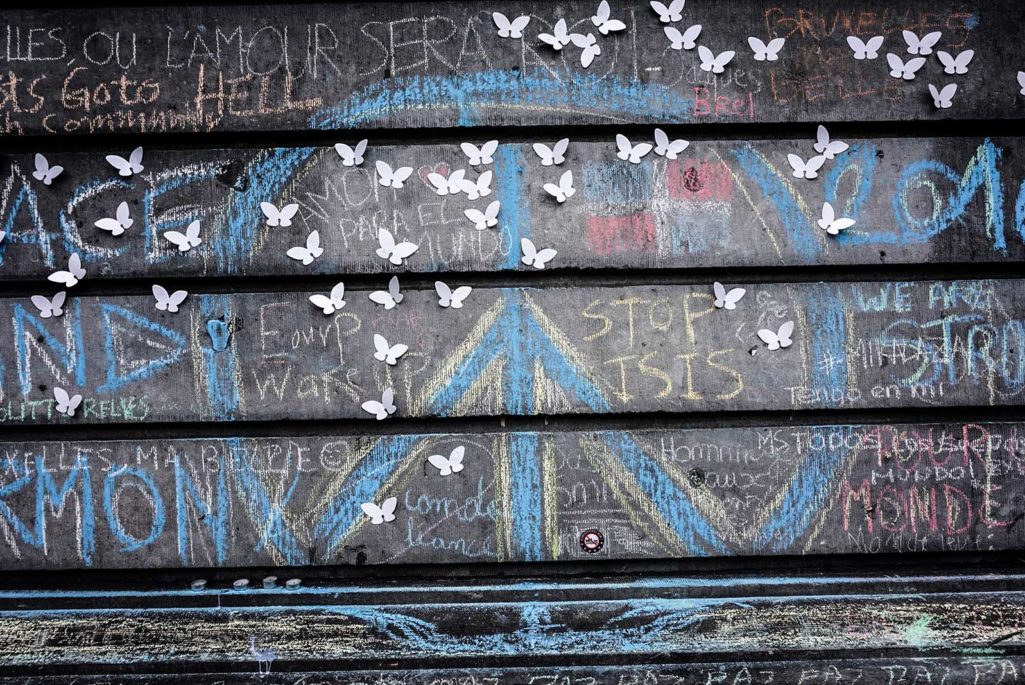 The peace symbol written with chalk is seen on a wall on the Place de la Bourse in central Brussels, on March 24, 2016, in tribute to the victims of the Brussels attacks. The Islamic Group claimed responsibility for the attacks. Security authorities faced mounting criticism over the country's worst-ever attacks.

While the news cycle has started to shift away from the terrorist attacks in Brussels, they remain at the forefront for many Americans as heated presidential campaign rhetoric over national security policy is directed at Muslims.

Only hours after the attacks, GOP presidential front-runner Donald Trump issued a statement calling for the U.S. to “shut the borders” and stop letting Muslim refugees in. GOP presidential candidate Ted Cruz issued a similar request, demanding that law enforcement be empowered to “patrol and secure Muslim neighborhoods before they become radicalized.” These kinds of statements are not cost-free.

Such statements piggyback on the San Bernardino tragedy earlier this year, when American society was rocked with the understanding that terrorists such as ISIS have shifted their attack preferences away from highly symbolic landmarks (like the Twin Towers and Pentagon) and toward any random “soft target” with the goal of maximizing fatalities. In other words, terror can now strike Main Street U.S.A. at any time.

The combination of anti-Muslim rhetoric in a heated presidential campaign season and the violent extremist threat from ISIS and al-Qaeda can raise the risk of harm to U.S. public safety. That happens through mutually reinforcing factors, including the validation of terrorists’ recruitment narratives that feed off of fears of alienation and victimization. In turn, this contributes to a fearful social climate that may make hate crimes more acceptable and U.S. Muslim communities less comfortable to report potentially troubled individuals being influenced by violent extremism.

It would not be an exaggeration to point out that heated anti-Muslim campaign rhetoric feeds into extremist narratives. Since the Brussels attacks, the pro-Islamic State al-Battar Media Foundation released a propaganda video featuring an image of Trump superimposed over visuals of Brussels being burned and splicing it with audio clips saying how terrorists created “an absolute horror show.”

This is not the first time Trump’s profile has been raised in an extremist video. In early March, he was mentioned in a video by UK-based extremist Abu Haleema. He used Trump’s rhetoric as proof that Americans hate Muslims and that they will never be welcome in the United States.

Statements such as these validate terrorists’ recruitment narratives and further contribute to a growing climate of fear and hostility felt by the mainstream majority of U.S. Muslims.

Research finds that the No. 1 reason people are reluctant to report friends or family at risk of engaging in violent extremism is due to fear of repercussions over reporting. In this context, anti-Muslim statements are likely to be counter-productive. American Muslim community members, many of whom already have tense relations with police, may become even less comfortable coming forward with important information. Not surprisingly, enforcement officials and national security professionals have both raised their concerns.

Current New York Police Department Commissioner William Bratton slammed Cruz’s “Muslim patrols” proposal, noting, “We do not ‘patrol and secure’ neighborhoods based on selective enforcement because of race or religion, nor will we use the police … to appease the provocative chatter of politicians seeking to exploit fear.”

On March 2, a group of 121 GOP national security leaders outlined the direct counter-terrorism impacts of anti-Muslim rhetoric. In an open letter, they condemned the “hateful, anti-Muslim rhetoric [which] undercuts the seriousness of combating Islamic radicalism by alienating partners in the Islamic world making significant contributions to the effort.”

Anti-Muslim rhetoric during a highly charged presidential election cycle and the terrorist threat from al-Qaeda and ISIS not only pose a risk of harming efforts to counter violent extremism, they also increase the possibility of hate crimes directed at Muslims and those perceived to be Muslim.

Until recently, Muslim polling experts bucked the conventional wisdom on anti-Muslim bigotry, such as Dalia Mogahed did in her analysis of Pew opinion data. In 2013, she concluded that anti-Muslim opinions were associated more with the politics of post-9/11 election cycles than international terrorism, per se.

Since the rise of ISIS, Mogahed has revised her original analysis. Because of its ultra-violent methodology and its savvy ways of broadcasting to wide audiences, she now notes there is “an uptick in [anti-Muslim] perceptions because of this media phenomena called ISIS. Now we have both ISIS and an election year.”

It’s important to point out that terrorist attacks not only impact anti-Muslim beliefs, but also anti-Muslim behaviors, particularly violent hate crimes. A December 2012 study by the National Consortium for the Study of Terrorism and Responses to Terrorism (START) at the University of Maryland found hate crimes are more likely to occur in the immediate aftermath of terrorist attacks, particularly towards members of communities perceived to be responsible for the attack.

Indeed, news outlets reported a rise in anti-Muslim hate crimes since the Paris and San Bernardino attacks. The recent incidents in Brussels are likely to continue that trend.

When it was published, the START study came with the caveat that “no evidence that the occurrence or escalation of hate crimes served as an indicator or warning sign of future terrorist attacks.” However, like Mogahed’s earlier analysis, the emergence of ISIS combined with anti-Muslim rhetoric may seriously challenge the relevance of this finding.

Despite the bleak-sounding assessment, there are two important things that can mitigate this risk.

First is the rising numbers of groups from across the political and social spectrum that are speaking out against anti-Muslim bigotry. Much of this is probably driven by mutual self-interest as it is by moral concerns. Some studies have found anti-Muslim views are associated with negative bias directed at other groups including blacks, Latinos and Jews.

For example, prominent American Jewish civil rights group the Anti-Defamation League has spoken out against the heated rhetoric. They have issued statements opposing proposals to temporarily ban Muslims from entering the United States, the scapegoating of Syrian refugees and the “Muslim patrol” idea.

Second is to consider alternative strategies to combat domestic violent extremism. The heated rhetoric notwithstanding, there is a legitimate concern about terrorist violence and the best way to counter it; however, the current approach stigmatizes Muslims by focusing only on al-Qaida and ISIS-related violence, whereas research clearly suggests there are multiple types of violent actors to be vigilant about, including violent far-right militants.

One proposed alternative is to take a more comprehensive approach to public safety. National Outreach for Hazards Awareness and Threat Education (NO HATE) draws from successful efforts to combat “targeted violence” such as mass shooters and appropriately apply them to lone actor terrorists. Given the similarities between the two types of violence, this direction appears promising. Parallels aside, current practices that build local capacity to prevent mass shootings have demonstrated their effectiveness in similar operational contexts without being negatively biased or stigmatizing any particular group.

Antoinette D’Addario, a research intern at the National Consortium for the Study of Terrorism and Responses to Terrorism, contributed to this article.

Alejandro J. Beutel is a Researcher for Countering Violent Extremism at the National Consortium for the Study of Terrorism and Responses to Terrorism (START). He is the author of the Safe Spaces Initiative: Developing Tools for Healthy Communities. The opinions offered here are solely his and do not necessarily represent the views of START.

Andrew Yeo Senior Fellow and SK-Korea Foundation Chair in Korea Studies at Brookings Institution’s Center for East Asia Policy Studies
URL: https://www.brinknews.com/heightened-terror-risk-in-era-of-inflamed-rhetoric-violent-acts/
Get ahead in a rapidly changing world. Sign up for our daily newsletter. Subscribe
​​