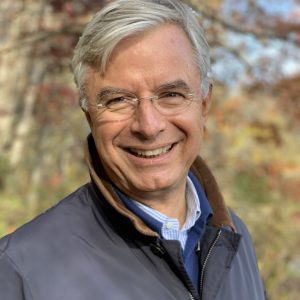 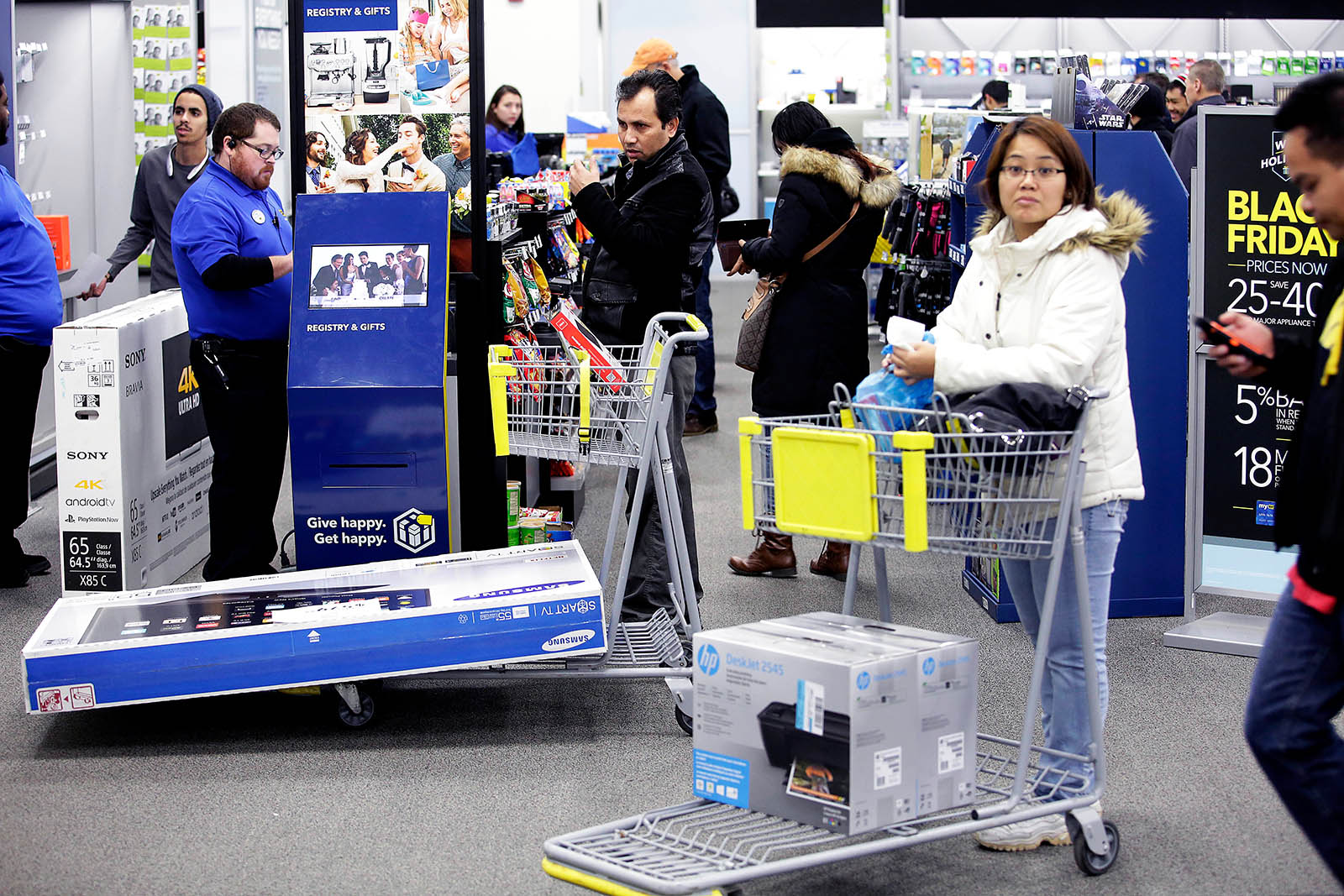 Customers shop for electronics and other items at a Best Buy in Illinois. A key part of the company's successful turnaround is a focus on purpose as a cornerstone of their strategy.

Hubert Joly was ranked by Barron’s as one of the top 30 CEOs in the world for his successful turnaround of Best Buy as chairman and CEO.

In a book called The Heart of Business: Leadership Principles for the Next Era of Capitalism, he explains how a sense of purpose was at the core of Best Buy’s success and why it is now essential for every major company.

JOLY: Purpose stems first of all from the idea that we have to abandon Milton Friedman’s idea of shareholder primacy, which has been a big source of our current problems.

Today, the purpose of a company — and I’ve said it to our shareholders — is not to make money; it is to contribute to the common good. I regard purpose as being at the intersection of what the world needs, what you’re good at, what you’re passionate about, and how you can make money.

At Best Buy, it took the first three years just to save the company. A lot of people had told us, “Cut, cut, cut. You’re going to have to close stores and reduce headcount” and so forth, whereas our approach was very human-centric. At that stage, purpose was not that explicit, but the underlying philosophy was there, and once the turnaround was over in 2016 or 17, we had to decide, “How do we accelerate our growth?”

We had done a good amount of work on market research, segmentation, targeting, i.e., on the where and the what, but there was a moment where we said, “We also need to talk about the why.”

That’s how we came up with this idea of enriching lives through technology. This concept vastly expanded our addressable market. So the company’s performance from 2017 to now has been very much rooted in this idea of purpose.

Of course, many companies talk about these things, which is great, but then you have to follow through, right? You have to make purpose the cornerstone of your strategy, and you have to have everyone at the company feel that their own purpose in life connects with the mission of the company. And it takes a lot of work to get to that point.

The Role of the Company Needs a Fundamental Rethink

BRINK: I guess one of the reasons that Milton Friedman’s idea has stayed around is because it does align with why a lot of people go into business, which is to make money. So does purpose push against that?

JOLY: I think we need to rethink all of this, because what’s the definition of madness? Doing the same thing and hoping for a different outcome. We are obviously facing a multifaceted crisis: health, economic, societal, racial, environmental, geopolitical. And if we keep doing the same thing, we’re not going to fix any of these things, so we have to fundamentally rethink what we ought to be doing.

Of course, making money is an imperative. You need to make money. By the way, part of what gives credibility to the book is the fact that our share price at Best Buy went from a low of $11, in 2012, to about $120 now. Ten times in eight years is not bad. It indicates that there’s no need to choose between being a force for good in the world and creating shareholder value. It is not about trade-offs; rather, leadership in this new era needs to call on our better instincts.

The Question Is Not Whether That’s the Right Direction, but How?

You cannot have lived through 2020 and say, “No, everything is fine. We should be fine. Let’s do nothing and we’ll be fine.”

BRINK: Rebecca Henderson of Harvard said something in her interview with BRINK, which I thought was interesting, that society has privileged free markets for too long. Do you agree with that? Do you agree that business is going to have to be regulated in order for it to change?

JOLY: I learned a long time ago that 98% of the questions that are asked as “either/or” are better answered as “ands.” I think business can be an enormous force for good. I think we’re seeing this — you’ve seen the Edelman Report that shows companies are the most trusted organizations — so we can have a big impact, and you’re increasingly seeing people step up to the plate.

The role of CEO has changed fundamentally in many ways: CEOs should be involved more, but they need to use a number of criteria to determine when to get involved.

But more actions are needed. For example, I find it interesting that all of these companies have embraced the idea of purpose and stakeholder capitalism, but executive compensation is still very much tied exclusively to shareholder value creation.

Some regulations are needed. There’s this madness where the P&L and balance sheet of a company are following GAAP rules (generally accepted accounting principles), but nobody said that this was supposed to represent economic reality. This is just a set of norms. There’s a ton of things that are not included in these numbers, including the quality of your workforce, as an example, but also, of course, your externalities. And business leaders today who are solely focused on profits don’t take into account these externalities.

That’s changing, but I think that the government can play a role in nudging companies, for example, by putting a tax on carbon, so you can have a market and regulation. And then there are entire industries, like food or apparel, that have begun to work together on addressing sustainability issues of common interest, which I think can provide added momentum. So it’s all of the above.

It’s Better If the Change Is Intrinsic

JOLY: The way human beings are, it’s always better if the motivation is intrinsic, because nobody likes to be told what to do.

How to Engage Your Virtual Workforce

I only passed the baton at Best Buy in June of 2020, and I’m still very involved in the business world: I’m on two boards and coaching and mentoring a number of CEOs and senior executives. And what I’m seeing across multiple companies is significant movement.

This last year has been a huge accelerator. The momentum was there before, but now it’s vastly expanded, and it’s wonderful because if it’s intrinsically motivated, it’s going to go faster.

And of course, employees and customers are putting on pressure as well. You cannot lead an organization if you ignore the desires and aspirations of your employees, and employees are very vocal these days. You’re not going to be able to attract them and retain them if you’re not doing good in the world.

How to Engage with Societal Issues

BRINK: Where do you think the right balance is in terms of businesses becoming involved in societal issues? We’ve seen companies protesting restrictions on voting in the U.S. What’s the appropriate role for business in these sorts of areas?

JOLY: I’ve given a lot of thought to this because there has been a sea change, and the role of CEO has changed fundamentally in many ways. But we have to be thoughtful because we’re not elected officials, and we’re not competent in everything. So CEOs should be involved more, but they need to use a number of criteria to determine when to get involved.

One is the issue of relevance to the business. So if you’re headquartered in Georgia, like Delta or the Coca-Cola Company, the Georgia voting law is relevant to you. If you don’t have any operations in Georgia, maybe it’s not so clear. Or if you’re a Walmart, guns are a real issue. If you’re, let’s say Best Buy, guns are less of an issue. Not as relevant.

Then you have to be legitimate. Just being a CEO does not give you a God-provided right to speak on any matter. So a question would be, as with these bills, have you read the bill? And do you know something about voting rights and voting laws? I’m not saying it’s particularly complex, but if you’ve not read the bill, how can you comment?

When Nike did their Colin Kaepernick commercial around him taking the knee, it was a good issue for them because they have a lot of black athletes, but it backfired a little bit because somebody said, “Show us your own internal actions on diversity and inclusion.” And at the time, like many companies, they had room for improvement.

And then you look at efficacy. Is your action going to make a difference? For me, on the voting rights, and I’m a new citizen, so I’m very passionate about voting, but just making a statement that democracy is important, what does it really do? It’s action in Congress that needs to happen.

The point is that business can be very impactful — sometimes. At Best Buy, we weighed in on a bunch of issues when I was there, and Corie Barry, my successor, is continuing to do so. What worked well for us was that it was not just me making the decision. I had a process where various functions weighed in, because these issues are usually multifaceted. We had our criteria and our process, and that led us to make better decisions. It’s important to be thoughtful about it.

Hubert Joly is the former chairman and chief executive officer of Best Buy Co. He is now a senior lecturer at the Harvard Business School.

Michael Parke Assistant Professor of Management at Wharton School of the University of Pennsylvania
URL: https://www.brinknews.com/how-do-you-embed-a-sense-of-purpose-into-a-company/
Get ahead in a rapidly changing world. Sign up for our daily newsletter. Subscribe
​​