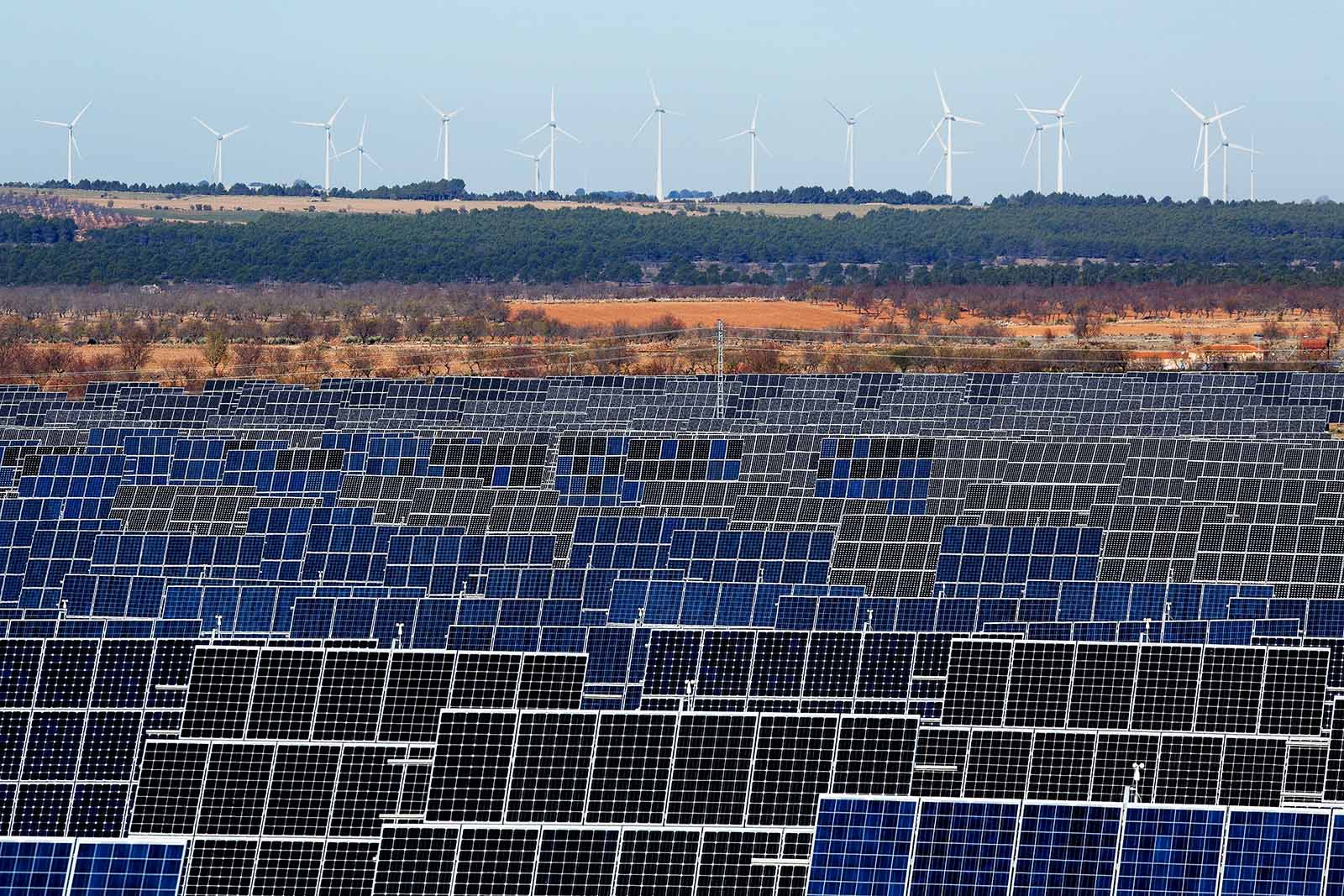 Photovoltaic power panels stand at Abaste's El Bonillo Solar Plant while wind turbines spin at a wind farm in the background in Spain. While the renewables market has expanded in recent years, this has brought new complexities to consider.

Taking a sports analogy, renewables proliferation resembled a sprint for most of the last decade. Estimates suggest that renewables today enjoy a 22.5% share of the world’s energy mix — a dramatic increase from 8.6% at the start of the last decade, with solar taking claim as the dominant technology. Impressive growth has been due to some $2.6 trillion of clean energy investments during the previous decade.

But the market seems poised to transition from a sprint to a long-distance event: Indeed, capacity growth in 2018 was flat for the first time since 2001. The slowdown should remind the sector that with all of renewables’ blossoming, complications have arisen, too — for project owners and technology producers alike. So, while the renewables market has expanded in recent years, this has brought new complexities to consider.

The Market-Driven Era Has Begun

The momentary lapse of growth is best explained as the meeting point of myriad challenges.

On the investment side, market growth has understandably precipitated greater de-risking activity, but this has generally decreased lending margins as well as return on capital. Beyond the diminishing returns on investment, there have been instances globally of declining governmental support.

Subsidies Are Being Scaled Back

Compounding the issue is that some governments have ceased to offer subsidies to developers building new projects, which has contributed to investors’ caution.

For instance, feed-in tariffs (FITs) are increasingly considered an inefficient means of supporting the energy transition since long-term contracts are less able to incorporate technology advancements or falling energy costs. Quite often, FITs have ultimately led to higher electricity prices for end-users. In turn, renewable projects today are increasingly exposed to the market, as competitive auctions and merchant pricing have become commonplace.

Other incentives are falling, too. In the U.S., the two meaningful tax benefits — the federal production tax credit and the solar investment tax credit — are undergoing a step down before their current expected phaseout. What’s more, many states have already achieved their short-term minimum requirements set out by Renewable Portfolio Standards, which may have contributed to the country posting only modest growth in 2018. Elsewhere, changes to incentives have slowed growth for onshore wind additions in India and for solar in Japan.

The removal of subsidies and incentive programs presents heightened risks for sponsors, as greater reliance on merchant cash flows could erode the asset class’s credit quality — or even potentially undermine its future growth.

In the absence of long-term PPAs, sponsors may need strong balance sheets to fund the new renewables schemes being awarded, and project financing may be more challenging to structure, due to the implied volatility of cash flow and the limited leverage potential.

The difficulties of deploying further projects in developed markets places a spotlight on investment in projects in emerging ones.

Even with the use of credit enhancements that serve to support private investment into developing markets, the truth is that these projects generally remain less appealing to institutional investors; this is despite non-OECD countries requiring an additional $4.3 trillion of total capital for renewables generation between 2015 and 2040 if they are to meet the Paris Agreement’s two-degree scenario, according to Bloomberg and Ceres research.

There have been technological challenges, too, since not all advancements (particularly unproven ones) have been introduced seamlessly — with cost underestimations and technological underperformance causing reduced cash flows and rating actions.

In other instances, setbacks have come well into an asset’s operational life: For example, major impediments have often beset the offshore wind segment due to certain turbine models requiring repairs to eroded blades — the costs of which project owners may not have factored in.

However, other technological challenges could soon be at least partly alleviated.

The Buzz Around Batteries

On the horizon, there’s enormous anticipation around the wider deployment of battery technology to help solve the problem of renewables’ intermittent nature (i.e., they only operate when the sun is shining or when the wind is blowing).

Most batteries in deployment today are in the U.S. where they are already cost-competitive, if only for short durations.

But, with technology costs falling, we expect this to dramatically change over the next five or so years, with support likely to come from emissions targets and from the rising use of off-grid distributed generation.

For all the headwinds facing the renewables market, there is still reason to believe that market growth will pick up.

Indeed, S&P Global Platts Analytics still expects renewable additions to continue over the next two decades at an annual growth rate of 7%.

Certainly, further battery storage deployment is a key aspect of renewables’ end game, along with supportive governmental policies that help stimulate investment and the granting of permits, while reducing risks for developers.

Broader stimuli exist, too, such as higher oil prices, greater buy-in for renewables from large corporations (best explained by the rise of corporate power purchase agreements) and the electronification of industries, to name just a few.

Importantly, though, the recent hiatus of growth is a stark reminder to the market that an upward growth trajectory shouldn’t be taken for granted.

Evidence in ratings analysis shows that renewables investments can soon come under pressure if merchant risks rise, if a project’s liquidity decreases due to unforeseen costs or lower revenues, or if consumers raise affordability concerns. Market maturity has bred complexity and, increasingly absent mitigants, with greater risk for cash flows.

This is the reality in which lenders, governments, technology manufacturers and project owners now operate.

Trevor d’Olier-Lees is a senior director in the Infrastructure practice, part of the S&P Global Ratings’ Corporate and Government Ratings group. He is sector lead for P3s and Renewable Energy and is based in New York City.

Mark Campanale Founder and Executive Chair of The Carbon Tracker Initiative
URL: https://www.brinknews.com/how-long-will-the-slowdown-in-renewables-last/
Get ahead in a rapidly changing world. Sign up for our daily newsletter. Subscribe
​​