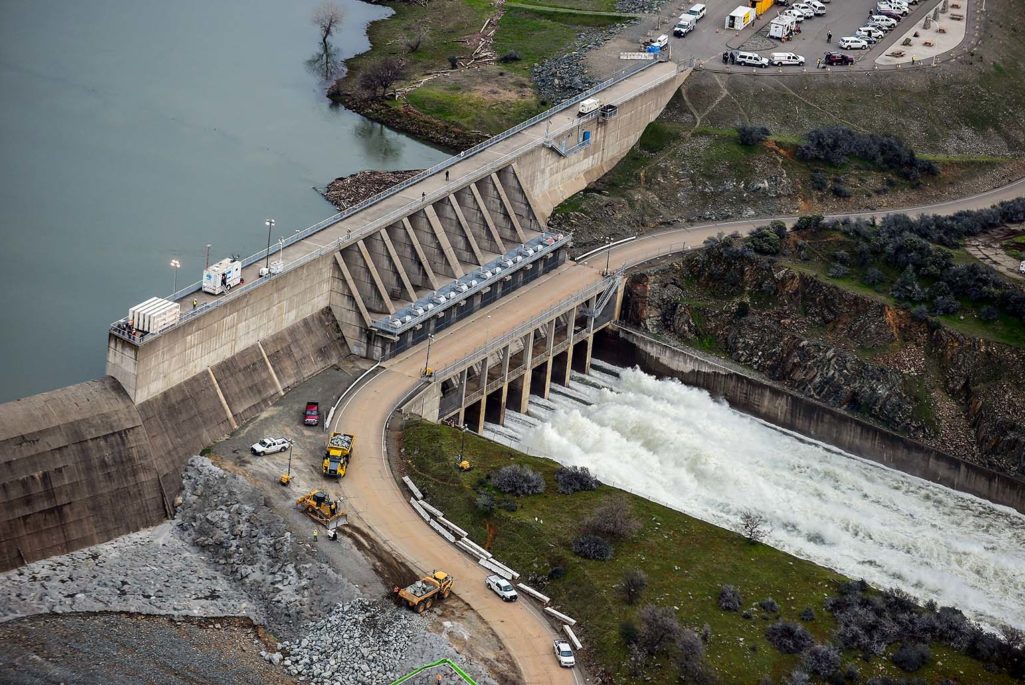 The Oroville Dam releases 100,000 cubic feet of water per second down the main spillway in Oroville, California. Back to full capacity after a record wet winter, the dam helped boost renewable energy generation past that of nuclear for the first time in 32 years.

Record electric generation from wind, solar and hydroelectric power in March and April combined to exceed that provided by nuclear sources in the United States for the first time in 32 years, according to the Energy Information Administration (EIA).

The record was the result of a rain-soaked winter environment across much of the West Coast that has wiped out the region’s prolonged drought and “contributed to the overall rise in renewable energy generation this spring, while nuclear generation in April was at its lowest monthly level since April 2014,” the EIA said. However, this may not signal a long-term decrease in nuclear power generation. The results, the EIA said, reflect “both seasonal and trend growth in renewable generation, as well as maintenance and refueling schedules for nuclear plants, which tend to undergo maintenance during spring and fall months, when overall electricity demand is lower than in summer or winter.”

Renewables lead over nuclear in the energy generation race will likely be short-lived, as official EIA projections estimate that “monthly nuclear electricity generation will surpass renewables again during the summer months of 2017 and that nuclear will generate more electricity than renewables for all of 2017,” the EIA said.

In addition, nuclear power is a critical component of a low-carbon infrastructure in the fight against rising temperatures and climate change. “[N]uclear power is a low carbon technology, with overall emissions of the same magnitude as wind or hydro electricity,” the Organization for Economic Co-operation and Development said in a report on nuclear’s global place in the low-carbon equation to fight climate change. While acknowledging there are a host of hurdles in front of nuclear power—from societal acceptance, to financing to public policy—“in most cases, constraining the evolution of an energy system by limiting carbon levels in the most cost-effective way leads to a high share of nuclear energy,” the OECD report said.

Thanks to a record wet winter in the West, hydroelectric power—which remains the largest source of renewable electricity in most months and was at its highest level in nearly six years this March—generated 30 billion kilowatt hours. The EIA projects a 14 percent increase in hydropower this year compared to 2016.

Wind and solar energy increases stem from more capacity coming online. “More than 60 percent of all utility-scale electricity-generating capacity that came online in 2016 was from wind and solar technologies,” the EIA said.

Between March 2016 and March 2017, wind power increased 16 percent and solar generation saw a huge leap of 65 percent. Wind power will see a modest increase of 8 percent in utility-scale generation for 2017, the EIA said, while solar will continue its upward trend, recording a 40 percent increase.

Mark Campanale Founder and Executive Chair of The Carbon Tracker Initiative
URL: https://www.brinknews.com/in-u-s-renewable-energy-surpasses-nuclear-generation-for-now/
Get ahead in a rapidly changing world. Sign up for our daily newsletter. Subscribe
​​