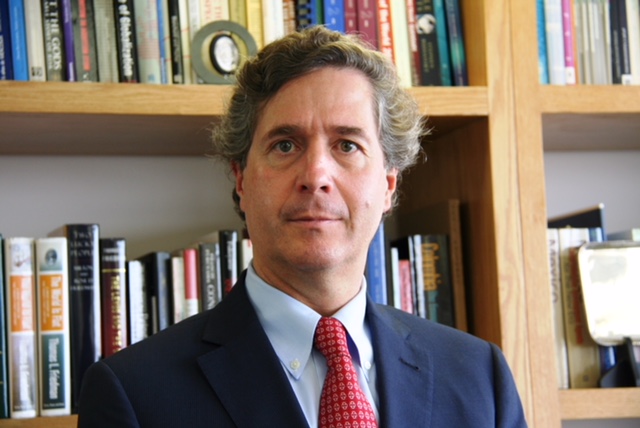 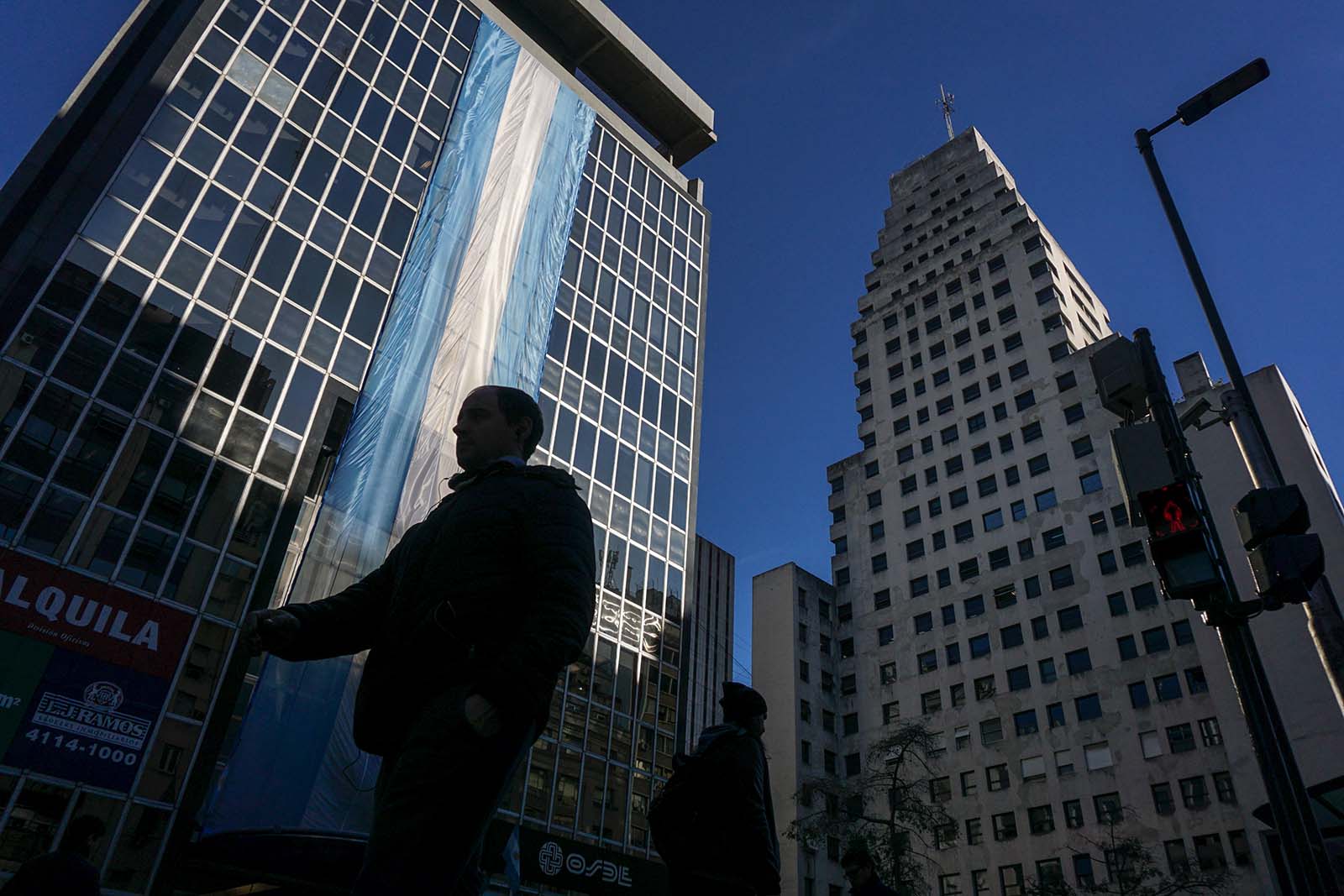 People walk past a building decorated with the Argentinian national flag in the financial district of Buenos Aires. Recent U.S. economic policy has provided an opening for Latin America to diversify its international trade outreach.

This is the final piece in weeklong BRINK series about Latin America. The previous pieces can be read here, here, here, and here.

For a long time, Latin American countries have had an ambivalent relationship with international trade. Dependency on raw material exports and the favoring of domestic interests conspired to keep economies relatively closed, lagging with respect to developed and Asian countries.

But things have changed in recent years as some regional countries have successfully integrated into global markets. The trend began with Mexico’s joining the North American Free Trade Agreement (NAFTA) in the early 90s, followed by a wave of other similar agreements. Chile, Colombia, Peru, Mexico and other Central American countries negotiated with countries in Europe, Asia and the Western Hemisphere, including the U.S.

Contrary to intuition, free trade agreements with the U.S. made these countries attractive partners for the rest of the world. Not all South American economies jumped on the bandwagon, however. Argentina, Brazil, Paraguay and Uruguay stayed stranded in a rather unsuccessful integration under the aegis of Mercosur. Bolivia, Nicaragua and Venezuela chose to follow a more radical model of scant integration.

The Driver of Natural Resources

With the exception of Mexico, a manufacturing economy, Latin American exporting countries have significantly benefited from a growing demand for raw materials coming from China and from Chinese investment flows. For a number of years improving terms of trade became their main engine for economic growth.

Eventually, as these prices proved unsustainable, economic conditions deteriorated sharply in economies that failed to adjust and modernize during the boom, particularly Brazil and Argentina. This calls for diversifying away from commodities and improving competitiveness through trade opening and knowledge.

Trump as an Opportunity

President Donald Trump represents a challenge, but also an unexpected opportunity for Latin America, which comes from two complementary sources: On the one hand, Latin American countries are, for once, on the right side of the issue. This is particularly true in Chile, Colombia, Mexico and Peru (founding members of the Pacific Alliance). In these economies, free trade remains relatively popular: Recent electoral cycles show that trade is not an issue in spite of the presence of left-leaning candidates. Even Andrés Manuel López Obrador, the leading candidate for Mexico’s election, has expressed support for NAFTA and other trade agreements.

Moreover, in the context of increasing questions about globalization, favoring free trade reflects positively on a country’s image: It transmits confidence, competitiveness and optimism about the future and a willingness to be part of a larger successful global economy.

The main source of risk lies not in the U.S. market closing down for regional exports (it might, but marginally), but rather in the fact that a regained status of protectionism might lead to tried and unsuccessful inward-looking commercial policies in the region.

White House policy may lead to better integration between Latin American economies, as well as to a serious diversification effort with Asia and Europe.

An Impetus for Diversification

A less engaging U.S. is also the perfect excuse to work seriously on a strategy of diversification. Contemporary agreements with other important economies serve the dual benefit of ensuring trade openness regardless of disputes with the U.S., while reducing the probability that the Trump administration will leave NAFTA or other agreements, since the erosion of access for Americans vis-à-vis other regions might prove too high a price to pay.

In the case of Mexico, for instance, the network of agreements with the European Union, the Trans-Pacific Partnership (TPP) and the Pacific Alliance guarantees the economy will remain open even if President Trump invokes article 2205 and pulls out of NAFTA (it would remain in place between Canada and Mexico).

The Advance of the EU and Others

Preferential access to European and Japanese firms makes it very unlikely that the U.S. will relinquish its access to Mexico under NAFTA. For example, the recently modernized agreement with the EU consolidates Mexican energy reforms and guarantees participation for European firms in upstream and downstream markets.

The TPP is on its way to entry into force when a minimum of six countries have ratified it. It grants Latin American members enhanced access to the valuable Japanese markets (especially in agriculture and more so with the U.S. out of the agreement). Meanwhile, Chile, Colombia, Mexico and Peru are busy working on perfecting and expanding the Pacific Alliance: Australia, Canada, Singapore and New Zealand are soon becoming associate members. It is not impossible to imagine that the new Colombian government will soon seek accession to the TPP.

Harder for Brazil and Argentina

A more interesting issue relates to the trade policies Mercosur members will follow going forward. Brazil and Argentina know their economies punch below their weight without integration with the rest of the world. These economies are still too heavily dependent on raw materials and exports to China. It is increasingly clear that raw materials are not enough for true modernization as economies are subject to wild price swings, and necessary diversification is difficult to obtain.

Brazil and Argentina do not have many options to implement an open trade policy. The multilateral approach does not look promising at this juncture. Negotiating with the U.S. is not in the cards. The long process of negotiations with the EU has not matured for closure in light of significant differences in agriculture.

Negotiating a free trade agreement with China might make sense as exporters of raw materials, but it is probably the most dangerous option in terms of disruption for noncompetitive manufacturing. A better option could be to consider an arrangement with the Pacific Alliance. We’ll see if political changes in Brazil and Argentina will result in new approaches to trade.

It would be quite a paradox if the Trump White House led to better integration between Latin American economies, which have always seen each other as competitors, as well as to a serious diversification effort with Asia and Europe.

Luis de la Calle served as Mexico’s deputy trade minister in charge of international trade negotiations. He is managing director of CMM, a consulting concern specialized on economic, regulatory and trade issues with offices in Mexico City and Washington DC.

Donnie Williams Executive Director of the Supply Chain Management Research Center at the University of Arkansas
URL: https://www.brinknews.com/in-u-s-trade-policy-an-opportunity-for-latam/
Get ahead in a rapidly changing world. Sign up for our daily newsletter. Subscribe
​​