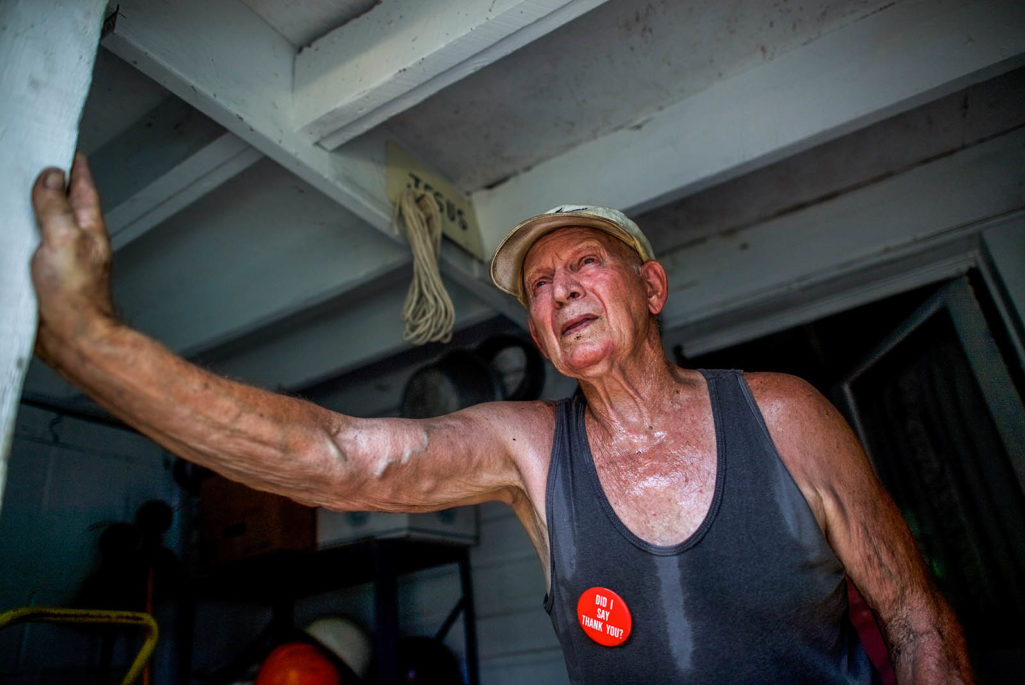 Nick Dindash, 78, poses for a portrait at his home on August 13, 2016 in Windber, Pennsylvania. The small Western Pennsylvania town of just over 4,000 residents was founded as a company town for nearby coal mines, most of which have closed. 11.1% of the population now exists below the poverty line, with a median household income of $23,261.

It had become increasingly common, even before current campaign cycle, for politicians to express concern about growing inequality in the United States. To oversimplify, the public perception was that the rich were getting richer and the poor were getting poorer. A closer examination of the data produced an amended version: The rich, particularly the top 1 percent, were, indeed, getting richer, but so were the poor, albeit much more modestly.

The people really getting hammered were in the middle, buffeted by both stagnant wages and rising costs.

Skip to the summer of 2016 and one can see this issue continually cropping up in the presidential campaign, even if the word “inequality” is not always used. [Republican nominee Donald] Trump speaks to the people hardest hit and, while he probably doesn’t feel their pain, he certainly promises to alleviate it. [Democratic nominee Hillary] Clinton likewise has made a number of proposals to address the problem.

Now, just to complicate things further, Emmanuel Saez, an economist at the University of California, Berkeley, has come up with data that leads to a somewhat different conclusion. As reported by Brookings Senior Fellow Gary Burtless, Saez’s “latest estimates show that between 2009 and 2015, income recipients in the top 1 percent enjoyed real income gains of 24 percent. Among Americans in the bottom nine-tenths of the income distribution, average market incomes climbed only 4 percent.”

But (there is always a “but” in economics) the obvious conclusion that the top 1 percent did better than everybody else needs to be tempered by the realization that during that post-recession period, they also lost more than anybody else and still have not returned to their pre-recession income level. Burtless wrote:

“Saez’s estimates also show that top income recipients experienced much bigger income losses in the Great Recession. Between 2007 and 2009, they saw their inflation-adjusted incomes drop 36 percent. … In comparison, the average market income of Americans in the bottom nine-tenths of the distribution fell just 12 percent. These numbers mean that top income recipients have not yet recovered the income losses they suffered in the Great Recession. In 2015, their average market income was still 13 percent below its pre-recession level. For families in the bottom nine-tenths of the distribution, market income was ‘only’ 8 percent below its level in 2007.”

This does not mean that we should feel sorry for the rich—far from it—but it does mean, in the complex world of economics, inequality is actually decreasing because the bottom 90 percent have “recovered” relatively more than the top 1 percent. In short, the gap is less than it used to be.

“CBO’s latest net income tabulations show that inequality was almost 5 percent lower in 2013 than it was in 2007. The Great Recession hurt the incomes of Americans up and down the income distribution, but the biggest proportional income losses were at the very top. To be sure, income gains in the recovery after 2009 have been concentrated among top income recipients. Even so, their income losses over the recession and recovery have been proportionately bigger than the losses suffered by middle- and low-income families.”

So, while the popular inequality narrative appears to be clearly true for the several decades prior to the Great Recession, the years since 2007 tell a somewhat different story.

Does that mean we don’t need to worry about it anymore? Not in the least. Wages are still growing too slowly, most people have not climbed back to where they were in 2007 and the inequality built into the system over the previous 30 years is still there.

However, in the interest of moving out of the fact-free zone in which the presidential campaign seems to be operating, it would be nice if the candidates acknowledged that we seem to be moving in the right direction and focused on how to build on the trend.

This piece first appeared on the Stimson Center’s Spotlight blog.

William Reinsch is a distinguished fellow with the Stimson Center, where he works principally with the Center’s Trade21 initiative. He is also a senior advisor at Kelley Drye & Warren. Mr. Reinsch served as president of the National Foreign Trade Council from April 2001 to May 2016. Prior to joining the NFTC, Mr. Reinsch served as the under secretary for Export Administration in the U.S. Department of Commerce.

Alain Frachon Senior columnist for Le Monde
URL: https://www.brinknews.com/inequality-revisited-a-somewhat-different-story/
Get ahead in a rapidly changing world. Sign up for our daily newsletter. Subscribe
​​