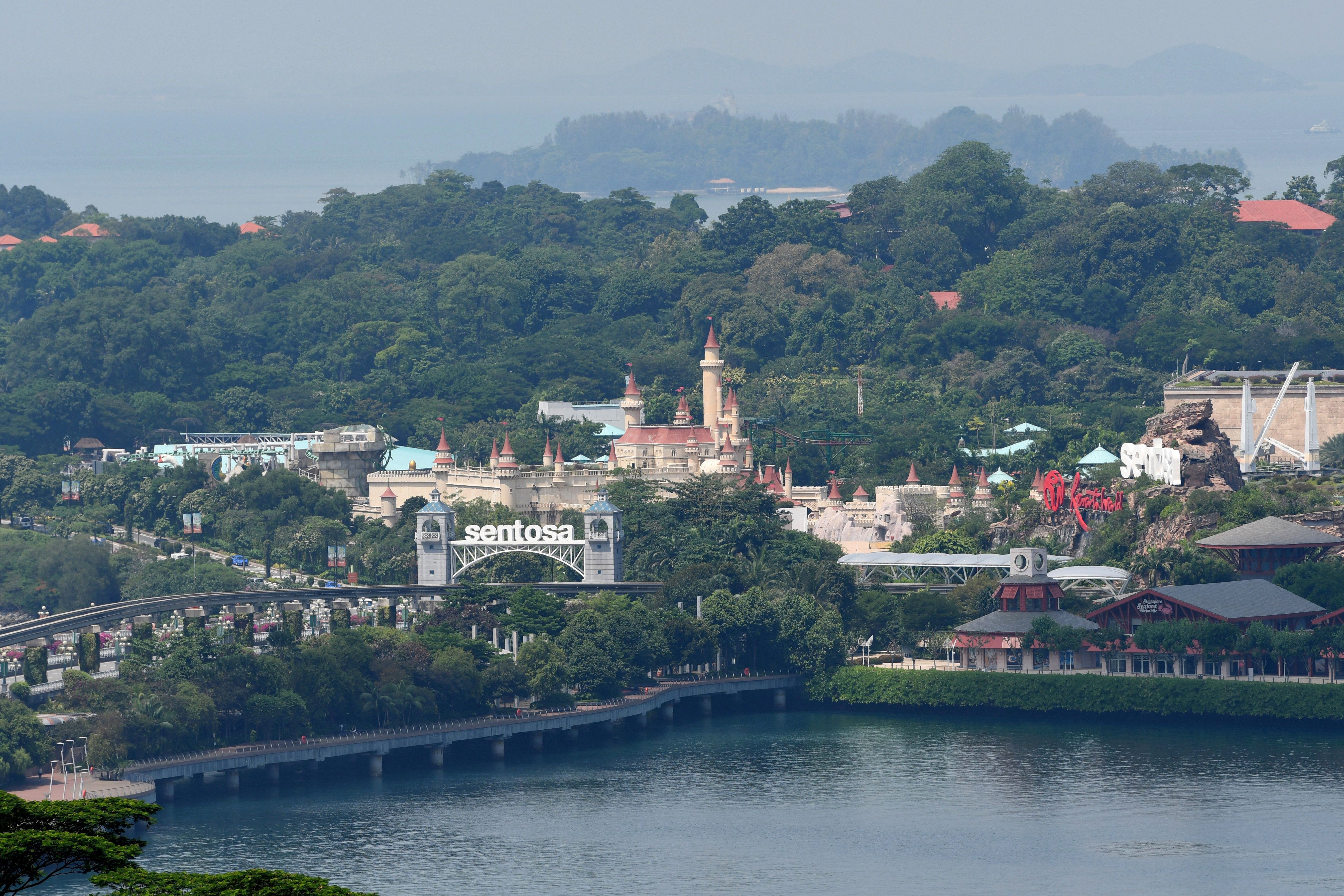 This photograph shows a causeway leading to the Sentosa island, the resort island off Singapore's southern coast. Singapore planned early on to create a green cover to improve quality of life for its people.

Emerging Asian economies are fast expanding, and an associated phenomenon has been that of rapid urbanization. However, due to rapid growth, urban spaces are giving way to real estate developments for residential and commercial purposes. The current challenge is to ensure seamless integration of natural ecosystems within urban locales, and in this regard, some Asian cities are faring better than others.

BRINK Asia spoke with Henry Steed, landscape architect credited with some of Singapore’s most iconic landscapes (such as the Singapore Flyer, Universal Studios Singapore and Resorts World Sentosa) and director of ICN Design International, about the importance of trying to incorporate natural ecosystems into our cities, the challenges in doing so, and why some Asian cities have had more success in doing so than others.

BRINK Asia: Why is it important for urban centers in cities to integrate natural ecosystems into the environment?

Henry Steed: There is a long-standing movement of greening cities, and it goes back to the 19th century—probably even longer before the Hanging Gardens of Babylon. It has been recognized that having greenery in a city improves the condition of people living there as it generates a positive mood in people. There is an almost innate desire to improve the environment of the city. We take nature and work with it to our best advantage, bringing whatever we can of nature and integrating it into our cities. You can’t really call it a natural ecosystem, because how is it natural if it is being maintained and taken care of? Rather, it is our version of a natural ecosystem, but it is still very important that we do so.

BRINK Asia: Is there a link between natural ecosystems in urban areas and health and productivity?

Mr. Steed: Yes, most definitely. The better your environment, the healthier you will be because you are stimulated to be healthy. You will go for walks, get fresh air and eat fresh food. You’ll be happier and healthier, and you will therefore generally be more productive. I really do believe that when the whole population of a city is living in a great environment, it will be healthy, happy and more productive—and productivity is directly linked to GDP. I think it is a huge link that many still do not appreciate.

BRINK Asia: But how difficult is it to integrate natural ecosystems into our cities?

Mr. Steed: Actually, it’s quite easy if you have the mind to do it. The dilemma is that urban spaces are incredibly expensive. In the past, we didn’t take much cognizance of nature because we were busy building all we needed in the cities. As much as we might desire to change our urban environment, we can only do so when we have the space. One of the things that was done early on in Singapore’s planning was to ensure that areas marked out for roads carried space for trees along the middle and sides of the roads. That way, Singapore was able to plant big trees along its roads all through the city. In other words, if a city does not have the space for greenery, there will be no greenery—and that’s one of the biggest challenges most Asian cities face today.

It is not that Asian cities don’t try. In addition to the availability of space, sometimes the speed of change is too slow to really allow implementation on any scale. You can have your highway well-planted and looking terrific, but you cannot do it everywhere all the time. In cities like Jakarta, for example, the city is getting bigger, but it is tough to improve the environment when resources are limited. Hopefully this will change. However, it will take a lot of time and money. I think the same applies to virtually all cities globally.

BRINK Asia: Is there a role for private businesses in this endeavor?

Mr. Steed: Absolutely, yes. In fact, private businesses often drive this on their own and, many times, with the encouragement of government policies and regulations. For example, in Singapore, you are bound by regulations based on Urban Design and Landscape Quality standards to provide a quality environment for every single building that is built. Across rapidly growing cities such as Manila, Bangkok, and several Chinese cities, there is this intent to change, and businesses are playing a big role in this. Businesses quite often have the resources and, therefore, contribute greatly to this growing program of improvement toward incorporating more natural ecosystems into the urban landscape.

BRINK Asia: What are the opportunities for businesses from this drive?

Mr. Steed: A quality environment is a very powerful marketing tool, and you only have to look at advertisements for residential and commercial properties in almost any city. You will see that a green environment plays a significant part in the marketability of any property, anywhere. And it has reached a point where, in Singapore, it is almost an open competition for who can outdo the other in terms of the quality of the environment provided. In fact, it has become increasingly difficult to sell even low-cost properties that do not offer a high-quality environment. There’s been a quantum shift in this attitude toward providing green environments with real estate projects.

BRINK Asia: What about businesses in other areas, outside of construction, real estate and housing?

Mr. Steed: Yes, there are opportunities for them, too, although this is perhaps a more tenuous loop between other kinds of commerce and good environments. If you take high-tech environments, then you will see that virtually all gravitate toward places with high levels of environmental quality. Silicon Valley is a prime example of this. Closer home, places like Biopolis in Singapore are in the midst of relatively more natural ecosystems. Such environments are better at not just attracting businesses, but also talent. The workforce of today expects to work in quality environments.

BRINK Asia: How can Asian cities reduce their ecological footprint, and are some doing it better than others?

Mr. Steed: Most Asian cities want to do this, although for some, it is exceedingly difficult. In some cases, there isn’t much money to spend even though they would love to improve their ecological footprints. And this question of altering your ecological footprint unfortunately comes down to money and political will. But assuming the political will is there, but there is no money, what can a city do?

Cleaning up rivers in towns has been something on everybody’s agenda for many years. It has happened in many cities across Asia, and China is perhaps the best example in this regard. They are doing so on a large scale in almost all cities. Many other countries and cities are likewise trying hard, too. Everyone should be looking at China’s model, because they are possibly outdoing everybody else at the moment. They have taken environmental sustainability extremely seriously and are willing to invest money and manpower toward ensuring urban environmental quality. China has seen the ugly past of industrial cities, and now it is absolutely intent on making sure the same doesn’t happen again.

BRINK Asia: In your view, what are some of the challenges that metropolises in emerging Asian economies need to address urgently?

Mr. Steed: Honestly, the change needed in emerging economies is the heritage inherited from past development. Their infrastructure was probably already inferior when it was first built—such as narrow roads, which cannot accommodate the massive increases in vehicular traffic, an insufficient electricity supply, lack of access to schools, safe passage to go from one place to another. In many cases, these problems have become accentuated, and inequality is increasing. A city can have all the middle-class and high-class environments it wants, but if 30-40 percent residents live in substandard conditions, then how can a city change that?

I think the challenge really is to try to get the heads of the political people, the designers, the planners, the intellectuals and everybody else to collectively deliberate on the time span in which actual change can be ushered in. In Mumbai, the much talked about slums have evolved into strong communities over the years, so it is not going to be easy to alter them. What does one do? Should Mumbai plant more trees and beautify the city—or solve its housing problem? What do you focus on? And remember, Mumbai is seeing thousands of people coming into the city and heading straight to these communities. How does a city balance its objectives?

BRINK Asia: Are you optimistic about the future of Asian cities?

Mr. Steed: Yes, I am optimistic in that I know there is so much will to change. I am still optimistic that these things will be dealt with, but I am not optimistic that it will happen soon enough. Human nature is such that it is always looking for a better solution; but unfortunately, we don’t always have the means to carry it out.

* Henry was speaking on the sidelines of the IFLA World Congress 2018, at which he was the keynote speaker.

Bart Édes Distinguished Fellow at Asia Pacific Foundation of Canada
URL: https://www.brinknews.com/integrating-natural-ecosystems-in-urban-spaces/
Get ahead in a rapidly changing world. Sign up for our daily newsletter. Subscribe
​​