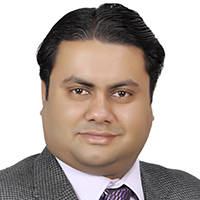 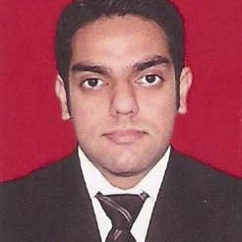 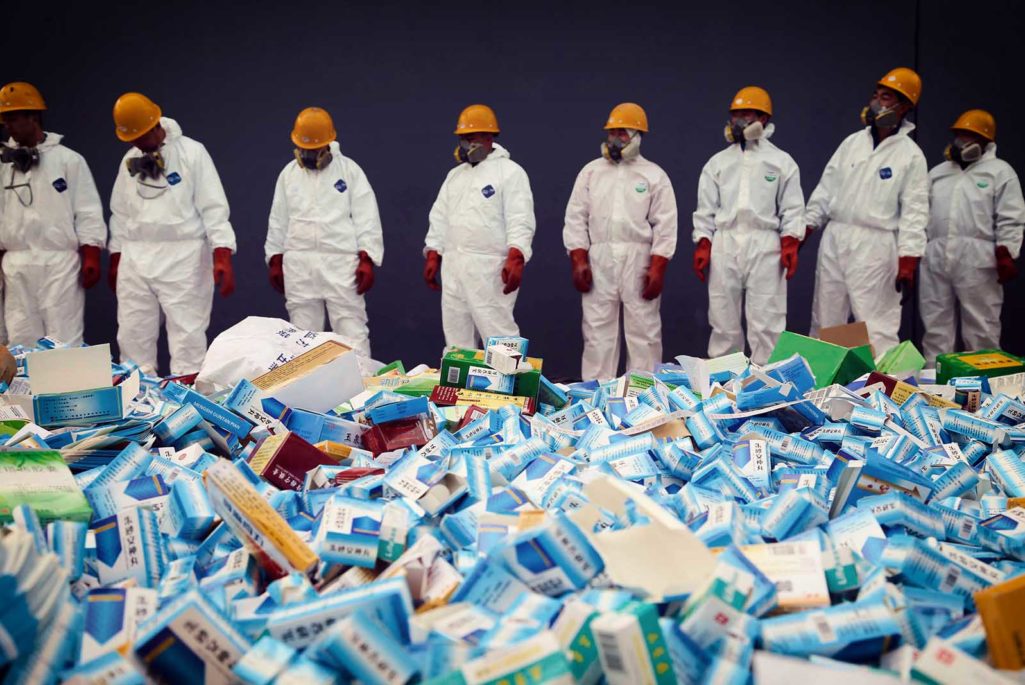 This picture taken on March 14 shows health workers preparing to destroy fake medicines seized in Beijing in recent months. The rapid growth of Internet commerce has led to an explosion of counterfeit drugs sold around the world, with China the biggest source of fake medicines.

Infringement of intellectual property (IP) rights such as counterfeit goods is estimated to cost businesses between $200 billion and $600 billion per year globally and continues to represent a major threat to businesses across the globe.

Several Asian countries are considered to be the biggest source and among the biggest markets for counterfeit products and services. Asia is also responsible for the largest share of the trade in counterfeit medicines. According to the OECD, the total value of imported fake goods globally in 2013 stood at $461 billion. Of the fake goods seized, 63.2 percent originated in China, and another 21.3 percent in Hong Kong (China). In India, duplicate products result in an 8-10 percent loss in revenue for fast-moving consumer goods companies.

In today’s globalized era, emerging economies ought to rely on IP for economic growth and development; and indeed, they are now realizing the need for and importance of IP protection and its impact on trade and investment. Yet, despite the many benefits offered by IP protection, several Asian countries lack the mechanisms necessary to grant and enforce IP rights such as patents and trademarks, and that results in significant losses to enterprises.

A strong IP regime is pivotal for the consistent flow of commerce and foreign direct investment as it is based on a proper framework for industrial and trade policies. It is important that IP policy is executed and enforced to encourage innovation and to attract investment.

Why is it Important?

Strong IP enforcement, with more rigid and stringent licensing, restricts the entry of imitative players into the market, making the market more attractive to investors. For instance, smartphone manufacturers in countries such as China face little or no entry barriers. But as they expand to new geographies or developed markets, they are often faced with patent lawsuits. A case in point is the Apple-Samsung patent tussle related to product designs and other infringements of intellectual property.

In economies such as India and China, there have been a number of cases pertaining to patent rejections resulting in an arduous process for claiming intellectual property damages. This often becomes a roadblock for economic development as imitators sell counterfeit goods without the fear of prosecution or damage. It is important for countries to not only grant IP rights but also build an enforcement mechanism to further stimulate innovation and provide financial rewards to inventors—the failure to do so will invariably result in stunted innovation.

In India, there are several acts to protect the interests of inventors and promote innovation, such as the Patents Act (1970), Trademarks Act (1999), Copyright Act (1957) and the Designs Act (2000). Additionally, the government has launched a vibrant IP rights policy and made several amendments realizing the importance of IP rights as a financial asset and commercial tool. However, the policy lacks adequate mechanisms to promote an IP regime and commercialize intellectual property, and as a result enforcement remains poor.

Other emerging economies also lack a strong IP regime; for instance, despite the high number of patents filed by China, less than 1 percent are considered to be of high value. In fact, globally, there is no positive correlation between the innovative performance of a country and the number of patents it has filed.

According to the Global Competitiveness Report 2015-16, Singapore has retained its number two ranking in the world for IP protection. This is largely driven by a business-friendly IP climate, which is a key reason businesses choose it for research and development investments. Additionally, the country’s IP practices are aligned with developed economies such as the U.S., the UK and the EU. Singapore has benefited by embracing a stronger IP regime and continues to build a conducive and progressive ecosystem to encourage businesses to perform IP activities in the country.

A few of the IP developments made by the Singapore government to promote IP rights include:

IP awareness. The government has made effective policies for the promotion and enforcement of IP rights and rewards IP holders for their efforts. It also encourages others to innovate and deters infringers from violating IP rights.

Fast-track processes. The Singapore government has taken adequate steps to quickly resolve IP rights issues within an appropriate timeframe so that the IP holder can be rewarded and enjoy the fruits of originality.

Improvised infrastructure. The IP process involves a series of actions for the grant of a patent. For instance, the whole process of patent examination can take six to seven years. But the government has introduced several measures to expedite the process through the use of technology and methodology.

Proactive monitoring for IP infringement. Singapore’s IP enforcement agency conducts enforcement raids based on information received from the IP owners, through anonymous tips, referrals from other agencies and the like.

Developing a global IP hub. The 10-year master plan recognized a window of opportunity for Singapore to become a hub for IP transactions and management, quality IP filings, and dispute resolution by leveraging its IP infrastructure, high-quality workforce, and strategic geographical location.

Asian countries should formulate effective policies and strategies that are responsive to current economic needs and build an IP ecosystem that supports greater creation, protection and exploitation of IP. They should seek to emulate Singapore’s successful implementation of IP rights policy and set up institutions that foster a strong and enforceable IP regime. This in turn directly influences the quantity and quality of FDI inflows and attracts R&D-intensive investment into a country, thus leading to an innovation-based economy.

The failure to protect IP can have serious ramifications on technological innovation across developing countries in Asia. Investment—in terms of both capital and time—in R&D and innovation may not yield immediate results, particularly when competitors prefer choosing a shorter path to success. However, it is a surer path to success over the long term.

Amit Aggarwal is co-founder of Effectual Knowledge Services. He is a thought leader in the intellectual property space and has been a trusted advisor to clients globally. He has extensive experience specifically within the IP domain and has worked with leading multi-national and regional corporations on patent strategy, business planning, operations, patent infringement, prior art searches, patent litigation and enforcement support services.

Karan Bhutani is assistant manager at Effectual Knowledge Services. He has more than six years of experience in marketing and communications, public relations, advertising, brand management, and digital marketing.

Robert Atkinson President of the Information Technology and Innovation Foundation
URL: https://www.brinknews.com/intellectual-property-in-asia-imitation-over-innovation/
Get ahead in a rapidly changing world. Sign up for our daily newsletter. Subscribe
​​