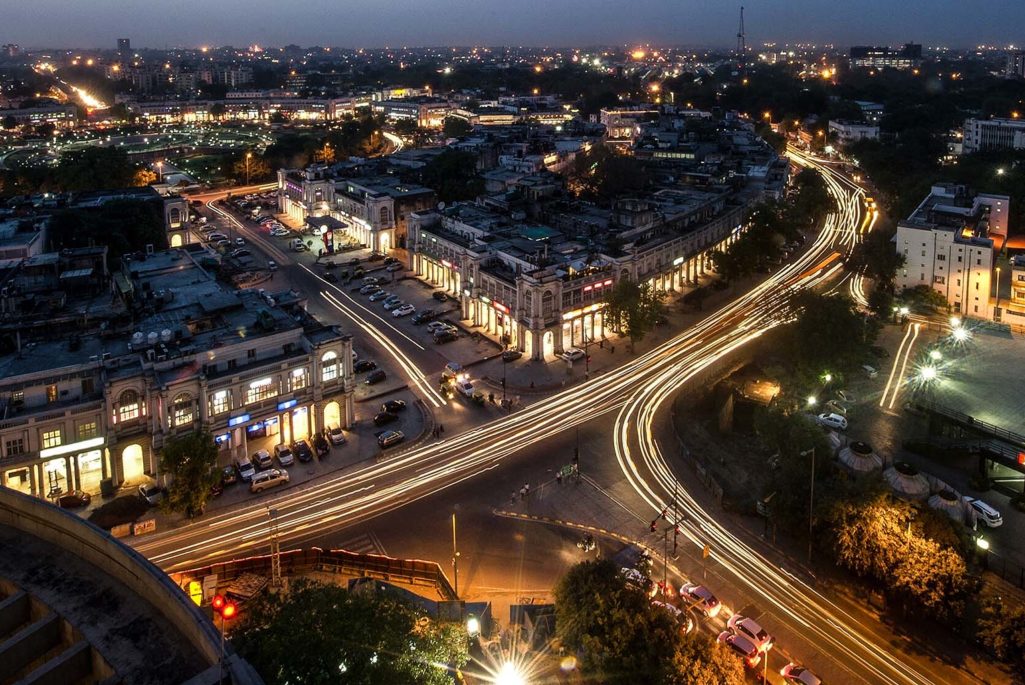 New Delhi skyline as traffic drives around the outer circle of Connaught Place.

The world’s cities are home to 54 percent (4 billion) of the earth’s total population; by 2050, that percentage is projected to increase to 66 percent. Today’s mass urbanization, while an undoubted driver of growth, is also unsustainable, according to a recent UN report, by putting many people at risk, creating unnecessary costs, negatively affecting the environment and bolstering social disparity.

The report chronicles how cities have changed in the past 20 years and lays the groundwork for policy recommendations and guidelines expected to emerge from as the New Urban Agenda, to be based on a series of meetings during the Habitat III conference held later this year.

The report goes far beyond just an overview of the upcoming conference and provides a deep analysis of key risks and challenges confronting today’s cities. While some of the risks outlined are not new, they are “persistent” across the last two decades and will continue to shape the landscape of urban areas for years to come.

“[M]any cities all over the world are grossly unprepared for the multidimensional challenges associated with urbanization,” the report said.

What follows is a summary of the key risks and challenges laid out in the report for the world’s cities.

Urbanization has occurred on an uneven basis; however, no region of the world can report a decrease in urbanization.

Africa leads the world in urbanization rates, with Europe seeing the slowest growth rate for cities.

The number of megacities (defined as having more than 10 million people) is increasing, rising from 14 in 1995 to 29 in 2015. Such cities are always on the leading edge of urbanization “because of their influence and economic importance,” the report said; however, such cities are not the fastest growing urban centers. That distinction belongs to small and medium cities with less than one million people. These cities hold 50 percent of the world’s urban population. “Despite the demographic importance and potential role of such cities, urban planning efforts in developing countries have focused disproportionately on the problems of large metropolitan areas … If small and medium cities are to fulfill their potential, then they should form part of the new urban agenda for developing countries,” the report said.

Decentralization is now a key factor for cities, where city officials are now elected rather than appointed. As cities separate from less-centralized governments, they are able to exert governance and democracy at the local level.

The Scourge of Slums

Slums and informal settlements aren’t a new issue for cities. Because slums continue to be plague cities across the globe, the report deems them a “persistent” risk and “part of the unfinished business of the (Millennium Development Goals) or part of the ‘old’ urban agenda that must be addressed by the new urban agenda.”

Public policy to deal with the issue of slums has had some success, the report notes. “The statistics on the incidence of slums over time reflect some notable improvement. While many still live in slums, they have clearly been receding as a proportion of the urban population over the last two decades.”

An issue closely linked to slums is the challenge of providing basic services and infrastructure. It’s a “central challenge to the economic performance of cities,” the report said.

When the provision of services breaks down, particularly for those in large informal settlements, “the basic productivity of all citizens will be compromised,” the report said.

The report sees attempts at creating public-private partnerships to deal with the issue of funding infrastructure development as a growing trend, but the experience of such a model among low-income countries has been disappointing, the report said, making such partnerships more appropriate for upper middle-income countries, “where borrowing is possible in the local currency.”

Cities are also at risk to climate events, as many of the world’s largest cities, including Jakarta, Mumbai, Cairo, Mexico City, New York and Los Angeles are located in low-lying coastal areas.

“Urbanization offers many opportunities to develop mitigation and adaptation strategies to deal with climate change, especially through urban planning and design,” the report said.

The response to climate change through mitigation and adaptation strategies as the city level “has been fragmented and significant gaps exist between the rhetoric of addressing climate change and the realities of action on the ground,” the report said. “The critical factor shaping urban responses to climate change is government capacity, which is hindered by factors that are institutional, technical, economic, or political in character.”

The expanding involuntary migration issue is a global problem; Europe has been at the center of the migration issue in recent years, owing to conflict in the Middle East; however, not all migrants are the result of conflict and there are numerous reasons the world’s cities are expanding their immigrant populations. Previous experience with refugee populations show that they ultimately have a positive influence on host cities, if appropriate integration policies are in place.

“Absence of integration policies can lead to the formation of ghettos and marginalized communities, which could serve as breeding grounds for frustration, disenchantment, vulnerability and even radicalization,” the report said.

The effects of globalization have been complicated by a rise in crime and violence in the world’s cities. These two issues continue to be of primary concern among urban dwellers, with one study showing that 60 to 70 percent of all urban residents have been victims of a crime.

In addition, “new and pervasive risks affecting cities include terrorism, urban warfare, heightened securitization and disease and pandemics,” the report said, circumstances that “undermine the long-term sustainability of cities worldwide.”

Tracy Hadden Loh Fellow at Brookings Institution
URL: https://www.brinknews.com/key-risk-trends-for-global-cities/
Get ahead in a rapidly changing world. Sign up for our daily newsletter. Subscribe
​​