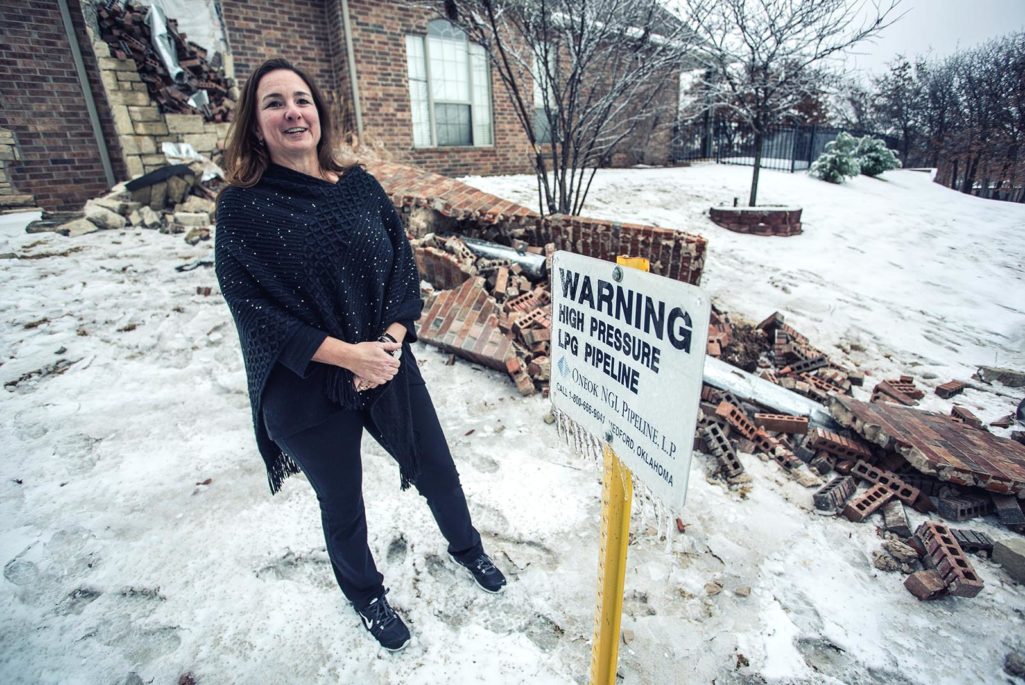 Dawne Sullivan, stands besides her home's chimney, December 29, 2015 in Edmond, Oklahoma. Her home was damaged by an earthquake. Many people are blaming the oil industry practice of fracking for the earthquakes. A recent report from the U.S. Geological Survey says that nearly 8 million Americans are at risk due to “human-induced” earthquakes linked to fracking.

The shale revolution in the U.S. has produced earthquake-sized disruptions, literally. The hydraulic fracturing technology—fracking—used to shatter the subsurface oil and gas trapped in shale rock causes earthquake-like movements that are putting nearly 8 million Americans at risk, according to a new report from the U.S. Geological Survey.

These so-called “induced earthquakes” are affecting the populations in the central and eastern U.S. (CEUS). In some parts of this region, the chance of damage from all types of earthquakes is similar to the more famous high-hazard areas of California.

The man-made quakes are a hazard to buildings, bridges, pipelines and other important structures for the 7.9 million Americans living nearby, the study said, noting that “several damaging earthquakes have recently occurred” near fracking wells.

“By including human-induced events, our assessment of earthquake hazards has significantly increased in parts of the U.S.,” said Mark Petersen, Chief of the USGS National Seismic Hazard Mapping Project in a statement. “This research also shows that much more of the nation faces a significant chance of having damaging earthquakes over the next year, whether natural or human-induced.” This is the first time the USGS has mapped human-induced earthquakes with those naturally occurring.

The CEUS has experienced a dramatic increase in the number of earthquakes over the last few years. Between the years of 1973 to2008, the region averaged 21 magnitude-3 or larger earthquakes. But that rate jumped to an average of 99 magnitude-3 quakes per year from 2009 to 2013. In 2014, the USGS recorded 659 magnitude-3 or higher quakes.

The USGS said: “The most significant hazards from induced seismicity are in six states, listed in order from highest to lowest potential hazard: Oklahoma, Kansas, Texas, Colorado, New Mexico and Arkansas. Oklahoma and Texas have the largest populations exposed to induced earthquakes.”

The USGS National Seismic Hazard Map is based on a 50-year cycle, owing to the average lifespan of a building. “Such information is essential to engineering design and the development of building codes,” the report said. “Building code committees are still determining whether it is appropriate to treat induced earthquakes in building code revisions, in part because induced seismicity changes on short time scales compared to the years it takes for building codes to be updated, reviewed and adopted.”

The USGS said the report can be used by government officials “to make more informed decisions” and by emergency response personnel “to assess vulnerability and provide safety information to those who are in potential danger.” Engineers can use this research to evaluate the earthquake safety of important structures such as pipelines, buildings and bridges.

“We are using the best available data and principles to determine when, where and how strong the ground could shake from induced earthquakes,” said Petersen in a statement. “Of course, there is a level of uncertainty associated with this and all hazard maps, as we are still learning about their behavior and can only forecast with probability—instead of predict with certainty—where earthquakes are likely to occur in the future. Testing these maps after a year will be important in validating and improving the models.”

Freddie Neve Middle East Associate at Asia House
URL: https://www.brinknews.com/man-made-quakes-put-8-million-in-u-s-at-risk/
Get ahead in a rapidly changing world. Sign up for our daily newsletter. Subscribe
​​