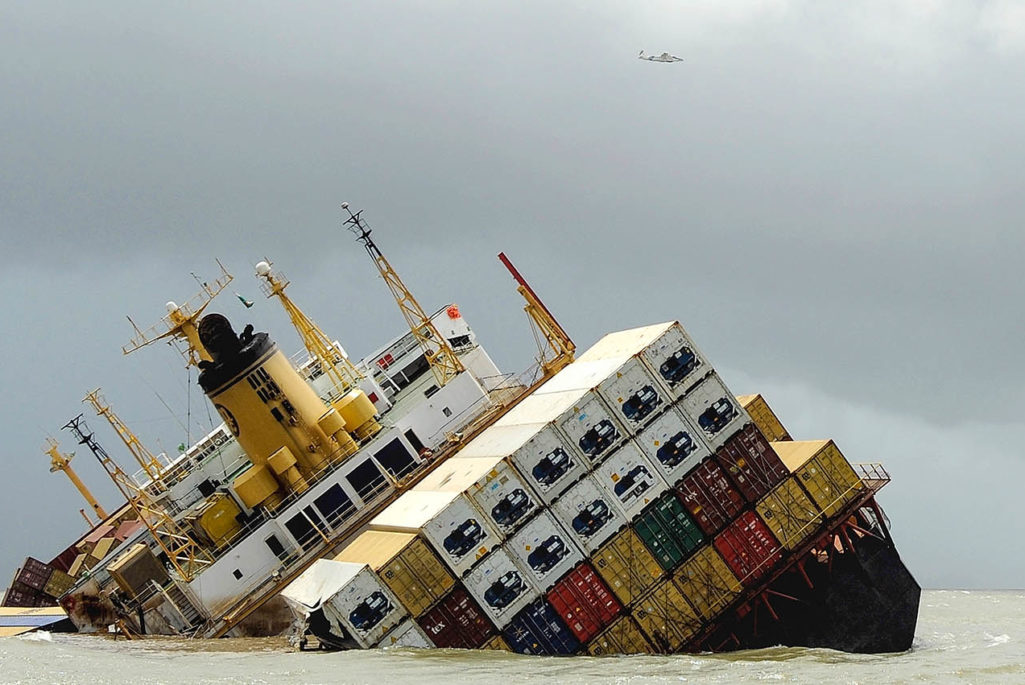 A damaged cargo ship waits for help in the Arabian Sea off the Mumbai coast after colliding with another vessel off the Indian coast. Some 200 containers fell from the ship. Environmental emergency teams were put on alert to mobilize for a clean-up operation, while fishermen were told not to put to sea until the all-clear was given.

As the investigation into the October 2015 sinking of the commercial cargo ship El Faro moves forward, marine insurers say this “isolated” event should not have any effect on pricing or underwriting, but the industry does face other challenges for the future, notably an increasing reliance on technology and risk aggregation.

The El Faro sunk during Hurricane Joaquin, killing 33 crew members in a still-mysterious event that spurred lawsuits against the ship’s owner by the crew’s families. While tragic, insurers say the event shouldn’t affect the marine insurance market, nor should the circumstances surrounding it affect settling claims pertaining to lost cargo.

“It’s not going to have any effect on pricing. The Costa Concordia didn’t really do anything to move the needle,” said Anne Marie Elder, chief underwriting officer for marine insurance at XL Catlin, referring to the Italian cruise ship that struck a rock and sank in 2012.

Alex Berisha, vice president of marine for Liberty International Underwriters, told Advisen, “The event is widely considered to be an isolated incident. While high-profile in terms of media and industry attention, it’s unlikely to have much impact on underwriting or on pricing going forward.”

The industry representatives explained that the marine industry must follow many safety guidelines for seaworthiness and safety of the vessel, making events such as the El Faro and the Costa Concordia outliers.

Claims handling is also unlikely to be a problem. “To expedite the claims process, we use a global network of investigators as well as conduct our own investigation to gather the pertinent facts as quickly as possible,”Berisha said. “While the exact details of a marine loss are often not readily available, the risk engineering analysis we develop at the beginning of a project to mitigate loss during transport is invaluable in helping us fill in the missing information and allowing us to more quickly process claims after a loss.”

The lack of a major impact from the sinking does not mean that the marine insurance industry does not face emerging trends that could affect underwriting, pricing and the health of the market. Experts cited a downturn in the oil industry, aggregation risk and cyber risk, the new trend in seemingly every line of coverage. Industry representatives expressed confidence that they can face this “sea of troubles” with aplomb. For now, these risks haven’t propelled any insurers away from the market, with cargo insurance showing profits even during a buyer’s market.

Elder said that the marine insurance industry sees continued downward pressure on rates as well as new entrants to the market, which she deemed “surprising.”

According to Berisha, the excess of availability in the market can itself be a challenge. Cargo insurance requires a highly specialized process to mitigate risks in the journey from manufacturer to user, he said.

“The challenge facing the marine industry is that it is currently in a soft market cycle with overabundant capacity and extremely competitive pricing, which can undermine the underwriting process and limits opportunities for risk engineering involvement, leaving cargo companies at risk for increased loss as well as not having the proper coverage in place to respond,” Berisha said.

Insurer expertise can also play a part, according to Paul Keane, marine claims manager at XL Catlin. “You could be on a risk with someone who … might not understand the complexities of what they’ve underwritten,” he said.

The shipping industry’s trend toward significantly larger container ships presents an unwieldy aggregation risk for marine and cargo insurers. In any given shipment, one insurer could have underwritten policies for several of the cargo clients on the ship.

“There’s no way for us to know whether we have an aggregation on a single vessel,” Elder said. John Miklus, president of the American Institute of Marine Underwriters (AIMU), told Advisen that in just 20 years, vessels have increased to encompass 20,000 TEUs, a unit of measurement to describe a 20-foot equivalent unit.

“If it sank, we’d be looking at a loss of well north of a billion dollars,” Miklus said. The lost cargo could be spread among hundreds of insurers, each with the “unknown accumulation” of risk.

He added, “If you write a policy for an importer or exporter, you would rarely know what vessels they’ve been loaded onto. If a ship sank, an insurer could have three different affected clients.”

The way to account for accumulation risk is reinsurance, according to Miklus. He added, “It’s not a perfect answer, but at the end of the day, it’s why reinsurance exists, to protect against that spike loss.”

Elder and Keane cited increasing natural catastrophes as a problem for marine insurers.

The industry is getting better at using data analytics to get a handle on catastrophe risk and aggregation, but the marine insurance industry has built up an art to its underwriting, reported Elder.

“Marine insurers are the last to really avail themselves of data analytics because there’s still really an art involved,” Elder said. “Every risk is different. You have to know who has the best port facilities, are they using the best shipping companies and is there any volatility in the port?”

With oceangoing vessels relying more on technology and the industry becoming significantly computerized, insurers feel that aggregation risk could be potentially resolved, even as cyber risk becomes a concern for insurers covering ships that could be target for hackers.

“Cyber risk and its potential impact on the marine industry is a growing concern for insurers,” explained Liberty’s Berisha. “Cyber response plans are becoming part of the overall marine risk review and analysis, and marine risk engineers are looking at a clients’ ability to detect cyber abnormalities and threats, their incident response capabilities, their past breaches or near misses, and then the engineer incorporates specific recommendations into cyber response plans in the overall risk mitigation plan.”

Miklus of AIMU commented that cyber risk affects the marine industry not only at the ship level, but ports as well, in terms of operation of cranes, bills of lading, electronic records of cargo and more.

“You have to think about what a hack could mean,” he said. “Nothing’s happened yet, that anyone’s aware of.”

The marine insurance industry has taken steps to address cyber risk, while the shipping industry has been following guidance from the U.S. Coast Guard.

Miklus reported that AIMU released a cyber exclusion for marine policies this past December,a move that has yet to be embraced by the industry.

“Given the competitive market, it’s been slow to gain acceptance from insureds and brokers,” Miklus said. “Insurers have been going for a risk control/risk management approach rather than flat-out exclusion.”

“They’re really struggling in the Gulf and Texas,” Miklus said. “Oil drilling and exploration expeditions are being cancelled, so there’s less business to write.”

Economic constraints due to a lack of supply need can put companies out of business or cause cutbacks on repair and upkeep of ships, he added. Layoffs could also lead to workers compensation or Jones Act claims, extending the issue to lines related to but outside of marine coverage. “We watch for an increase in losses,” Miklus warned.

Chris Miller Associate Professor at the Fletcher School at Tufts University
URL: https://www.brinknews.com/marine-insurers-face-cyber-unknown-accumulation-risks/
Get ahead in a rapidly changing world. Sign up for our daily newsletter. Subscribe
​​