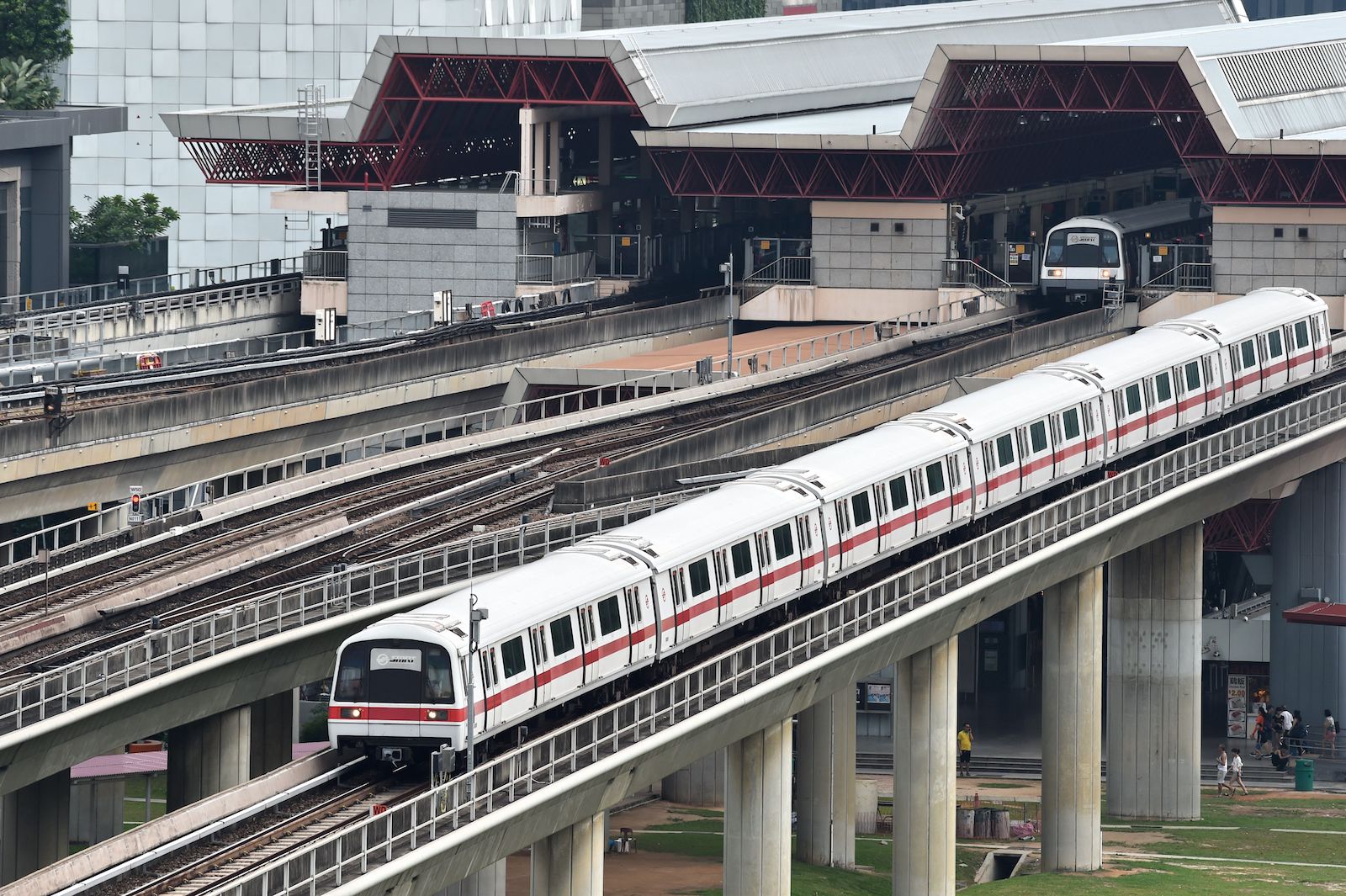 A Singapore Mass Rapid Transit train plies along a line at the Jurong East interchange in Singapore. Transport planners will have to consider the costs and benefits of different modes of mass transit as there isn’t a one-size-fits-all approach.

As Asian cities develop and expand rapidly, there is a constant space crunch. Within these confines, cities that are able to exploit and harness technology to address their urbanization challenges come out on top. One important element of a thriving city is that it is also moving. Good and efficient transport facilities are key to a city being livable and sustainable—it is a challenge many Asian cities continue to grapple with.

BRINK Asia spoke with Christopher Leck, deputy group director, Technology and Industry Development at the Land Transport Authority, Singapore, about the country’s vision of success in this area, the implementation of smart solutions and technology in urban mobility in the island-state, and the government’s vision for mobility.

BRINK Asia: What are some of the biggest obstacles associated with urban transport in Asian cities?

Christopher Leck: Traffic congestion is a major challenge faced by many Asian cities. According to the TomTom Traffic Index, three out of the top five most congested cities in the world are in Asia. Congestion in Asian cities is exacerbated by rapid urbanization and strong economic growth, which have led to an increasing demand for transport to move people and goods.

As a result, road safety outcomes are affected, with the Asia-Pacific region having a higher average road traffic fatality rate than the worldwide average. The rise in vehicle use and congestion also means more air and noise pollution. Besides the public health ramifications, the inefficiencies in urban transport lead to negative economic externalities, as congestion means increased transport costs and reduced productivity.

BRINK Asia: How can public transport cope with the population explosion in Asian cities?

Mr. Leck: Effective public transport systems can help alleviate the challenges posed by rapid urbanization and lead to more livable and sustainable cities. Public transport makes more efficient use of urban space compared to private cars in terms of the number of people carried per kilometer. Overall, the effect of decanting people from traveling in private cars to public transport is that congestion is reduced and the amount of land needed for roads and carparks is reduced.

To cope with increasing urban populations, significant improvements will need to be made to public transport systems in Asian cities. For example, the capacity of public transport can be increased by investing in new mass transit systems and improving existing systems and infrastructure. But transport planners will have to consider the costs and benefits of different modes of mass transit, from light rail transit (LRT) to bus rapid transit (BRT) to metro systems. There isn’t a one-size-fits-all approach. Mass transit systems are expensive and take time to build, and cities have to consider the financial viability of such projects. Cities can also implement policies to increase public transport mode share, such as by imposing demand management measures for cars, for example, curbs on parking or road pricing.

Transport planners may also consider how transport networks can be made more multimodal, allowing commuters to transfer seamlessly from one mode to another based on their needs. This can include making sure that infrastructure and supporting systems are integrated, for example, co-location of metro stations and bus interchanges, integration of fare systems, as well as encouraging commuters to consider active mobility means, such as walking and cycling.

BRINK Asia: What are governments in the region doing to cope with the increased demand for transportation services?

Mr. Leck: Cities in the region, including in Indonesia, Myanmar, the Philippines and Vietnam, have been responding by investing in new mass transit systems, ranging from metro systems to BRTs to LRTs. Many cities already have these systems in place, and new systems are being planned or built as we speak. In Singapore, we are doubling the length of our metro rail network from about 180 kilometers in 2013 to 360 kilometers in 2030. Active mobility also appears to have taken off in some cities, including Bandung, Hangzhou, and Tokyo, with bicycle-sharing schemes now increasingly popular. On Singapore’s part, we are expanding our network of cycling paths from about 240 kilometers today to over 700 kilometers in 2030 to facilitate the growth of active mobility. In many Asian cities, road infrastructure is also being improved to enhance traffic flows and road safety.

By harnessing big data from condition-monitoring tools and using data analytics, we are better able to predict the “health” of our public transport system.

Many governments in the region are shifting away from policies that favor private vehicles as a means of transport. Some, like Singapore, have put in place quotas to limit the number of vehicles in the city or schemes to reduce the number of older—and typically more polluting—vehicles on the road. Subsidies for fuel in several countries have also been reduced or eliminated in recent years.

Overall, besides increasing capacity and reducing congestion, many governments also recognize that improving the sustainability and quality of the living environment is an important goal. They have, therefore, taken steps to integrate transport and urban planning and employ transit-oriented development strategies. In some cases, they have gone to the extent of relocating key government functions to new cities, such as Putrajaya in Malaysia and Sejong in South Korea.

BRINK Asia: Discuss the implementation of smart solutions and technology in urban mobility in Singapore.

Mr. Leck: Smart solutions and technology offer Singapore the opportunity to transform our urban transport system and fulfill our vision of a car-lite Singapore, where Singaporeans choose active, shared and public transport means over ownership of a car. We are tapping on three key technologies.

First, big data. By harnessing big data from condition-monitoring tools and the use of data analytics, we are better able to predict the “health” of our public transport system—from our buses to our rail systems—and find and fix faults before they occur. Real-time analysis of commuter and transport data sets also allows us to better monitor transport operations, understand commuter demand and manage contingencies. All of these lead to a more reliable and efficient public transport system.

Second, the Internet of Things (IoT). Apart from sensors in our buses and rail systems, we are also tapping on IoT to better manage road traffic in Singapore. By the early 2020s, all vehicles in Singapore will be equipped with a Global Navigation Satellite System-based On-Board Unit (OBU), which will provide the Land Transport Authority (LTA) with a real-time, nationwide picture of all road traffic in Singapore. This will allow LTA to better optimize traffic flows through both a smart traffic light system that can dynamically adjust traffic light timings according to traffic conditions, as well as targeted updates to “nudge” road users via the OBU.

Third, autonomous technology. Autonomous vehicle (AV) technology has the potential to make public transport more accessible and efficient, while alleviating Singapore’s labor force constraints. For example, vulnerable groups like the elderly and people with disabilities can hail an AV shuttle to pick them up from their doorstep and deliver them via the most efficient route to their destination. Singapore has been exploring the feasibility of AVs since the beginning of the decade, with trials on public roads in mixed traffic taking place since 2015. We are now working toward the deployment of AVs for public transport in some of our towns by the early 2020s.

BRINK Asia: What are some challenges associated with implementing smart solutions and tech?

Mr. Leck: Many enablers need to be in place before smart solutions can be successfully implemented. Let me just cite a few, using the example of AV deployment.

First, there must be adequate standards and regulations to guide the deployment of new technologies, particularly a nascent technology like AV technology. Today, no international standards exist for the deployment of AVs at scale, and few countries have regulations on AVs in place. To help us achieve our goal of deploying AVs in some of our towns from the early 2020s, we have had to start our own effort here in Singapore to develop AV standards. We also amended our Road Traffic Act in early 2017 to put in place a regulatory “sandbox” to allow LTA to more nimbly put in place the necessary regulations for AV activities.

Second, public acceptability is also important. If the public does not feel comfortable with a new technology, the takeup will be slow. On AV deployment in Singapore, though, I am cautiously optimistic. Singaporeans are generally receptive to new technology, and I believe this will also be the case for AV technology. Our AV trials so far have been well-received, and the public has been keen to try them out. We are progressively stepping up our engagement with the public as we move toward larger-scale deployment to better understand as well as shape the level of societal acceptance.

Third, there must be a skilled workforce ready to support implementation efforts. Of course, there will also be concerns about job disruption. Again, I am cautiously optimistic. Even with the advent of AVs, there will continue to be a need for humans—to serve as controllers and fleet managers at the operations center, roving customer service officers to assist commuters when needed, and technicians and engineers to maintain the AV systems, and more. So the industry will see some form of job disruption, but in the process, new—and better—jobs will be created.