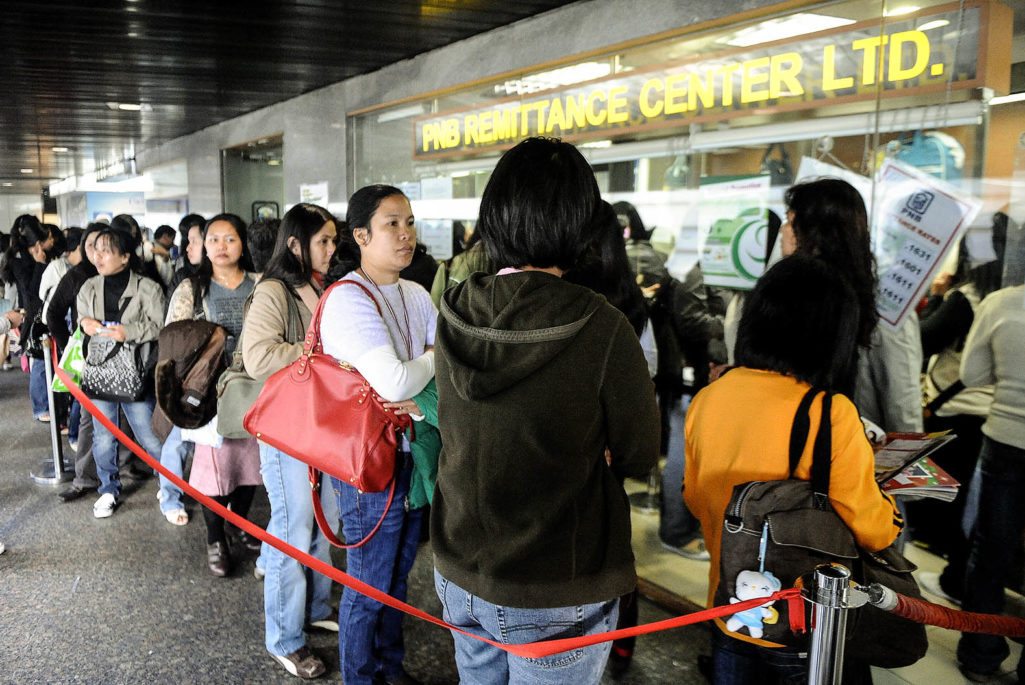 Filipino domestic helpers line up to send money at a remittance center in the central district of Hong Kong,

Although major banks are shutting down their remittance programs one by one, immigrants needing to send money home may not be out of options: Money transfer startups are popping up all over the world offering similar services at a lower cost than larger institutions.

Banks are backing out of their remittance practice because they fear large fines from the U.S. government if regulators find them culpable for allowing the financing of drug traffickers and terrorists through bank programs. This trend threatens the well being of families who rely on the funds transferred from immigrants abroad, according to humanitarian institutions. Groups such as the World Bank underline the need to establish a system with greater transparency for transfers that also encourages economic opportunity.

These startups—such as WorldRemit, InstaRem and Mama Money—face the same money laundering regulations as larger institutions, and in turn must invest in more resources to meet them, according to Dilip Ratha, manager of the Migration and Remittances Unit at the World Bank.

Legislation such as the Bank Secrecy Act and the USA Patriot Act require U.S. financial institutions to help detect and prevent money laundering and terrorism. In 2013, the Office of Foreign Assets Control identified and halted approximately $22 million sponsoring terrorism, according to the U.S. Treasury Department. Some banks are withdrawing remittance programs they view as risky because they can be hit with multi-million dollar penalties or lose their licenses if they are found complacent or incompetent.

A few cases of crackdowns loom heavy in the minds of financial institutions. HSBC agreed to pay U.S. authorities almost $2 billion dollars in fines in late 2012 after a Senate investigation found that the London-based bank served “as a conduit for drug kingpins and rogue states.” Western Union made a $94 million settlement with the Arizona Attorney General’s Office in 2010 when authorities found smugglers had been transferring laundered money through Western Union’s remittance programs.

Money transfer companies in the U.S. have several obligations they must fulfill to keep in compliance.

The last U.S. bank working with Somali money transfers, The Merchants Bank of California, stopped accepting Somali remittance transactions in February, prompting outrage from humanitarian groups such as Oxfam America who say that remittances account for a large percentage of Somalia’s national economy. The Treasury Department and FBI cite concern that this money may be funding radical Islamic groups such as Al Shabaab. Treasury Undersecretary David S. Cohen said in a recent statement that the government is working to create a more secure system to ensure that “legitimate customers” will receive the funds.

In the past year, both JPMorgan Chase and Bank of America halted low-cost money transfer services Rapid Cash and SafeSend, used by Mexican immigrants to send funds across the border. Citigroup’s Banamex USA unit shut down branches in Texas, California and Arizona in the wake of a federal investigation into their money laundering prevention efforts.

Other motives that lead banks to shut down their services could include competition from money transfer companies, poor profitability and reduced margins as the cost for remittances have dramatically decreased. While the cost of sending money globally averages 7.72 percent of the amount sent, this service fee is projected to rise as more and more players drop out of the game and smaller players still face looming regulations, Ratha said.

But that risk isn’t stopping startups from trying to break into the global remittance space, which contains a high demand: Immigrants sent an estimated $581 billion back to their home countries in 2014, according to the World Bank, with that number expected to increase to $681 billion by 2016.

Some startups narrowly focus on a specific region, such as Singapore-based InstaRem, which lets users send money from India to Thailand, Singapore or Australia. On the other hand, companies like London-based WorldRemit reach users who want to transfer funds from 50 countries to 117 countries. The methods of transfer also vary, from smartphone payments and cash pickup to Mobile Money services or bitcoin transfers.

These smaller companies face the same risks and regulations as banks, but the impact is much worse, Ratha explained, because these startups have significantly less resources than larger financial institutions. “In order to comply with regulations, they are hiring more legal experts for advice and IT service providers, which keeps service fees higher than they could be,” he said.

WorldRemit advertises their authentication technology from Norton and security and data services from five different partners. InstaRem notes on its website that the company “is required to comply with the requirements of the Anti-Money Laundering and Counter-Terrorism Financial Act 2006.”

Money transfer companies in the U.S. have several obligations they must fulfill to keep in compliance, said Stephen Hudak, the chief of public affairs at the Financial Crimes Enforcement Network (FinCEN) under the U.S. Treasury. They must register with FinCEN, be able to identify suspicious activity, keep detailed records and report cash transactions more than $10,000. The IRS regularly monitors these companies or institutions to make sure they are held accountable.

“I don’t know if anyone can expect perfection, but any company dealing with monetary transactions must have an anti-money laundering program that meets these standards,” Hudak said.

Ratha still worries that these standards place an unfair burden on these startups that actually results in an opposite, unintended outcome: making money harder to track.

“The cost of compliance has become prohibitive for these smaller companies,” Ratha said. “The cost of sending money then goes up again, which can drive money flows underground. Now, if you can’t see the money, how can you regulate it? This is a convoluted system we are in right now.”

Mark Campanale Founder and Executive Chair of The Carbon Tracker Initiative
URL: https://www.brinknews.com/money-transfer-startups-try-to-fill-void-left-by-closed-remittance-programs/
Get ahead in a rapidly changing world. Sign up for our daily newsletter. Subscribe
​​