On the Edge: Opportunities in a Polarized World 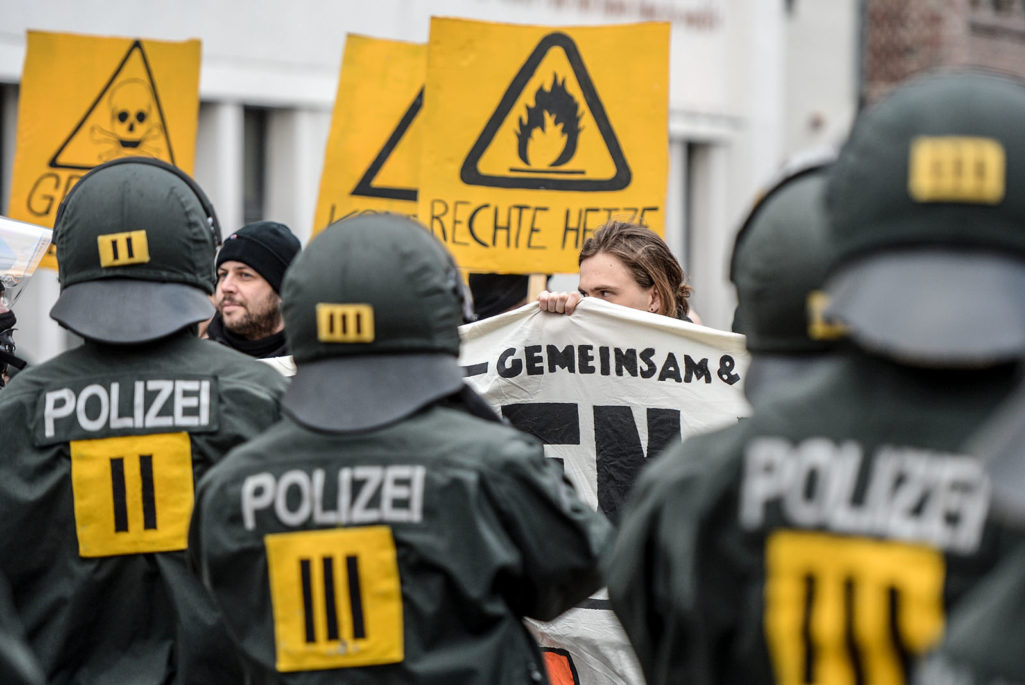 Riot police block a protest march against the right-wing populist party Alternative for Germany (AfD) party in Stuttgart, southern Germany on March 13, 2016. Chancellor Angela Merkel's party received a drubbing at key state elections as voters punished the German leader for her liberal refugee policy, while the right-wing populist AfD make major gains as it scoops up the protest vote.

Business leaders today must navigate a shifting global landscape of risks ranging from geopolitical tensions to social instability to emerging technologies. The shifts are creating new threats as well as new opportunities.

Political shocks and other unexpected events in 2016 were part of a broad geopolitical turn toward protectionism that has been building for years. This has put global cooperation under strain, as seen in developments ranging from collapsing trade agreements to the rising threat of nuclear proliferation.

On the social front, a number of dynamics are increasing instability. Many citizens in advanced economies are struggling with their economic future, facing protracted threats to employment and retirement security. Meanwhile, in developing economies, more citizens are moving into the middle class, creating new demands on their governments that they have been slow to meet.

The ever-present threat of terrorism changed its face in 2016 as the specter of the “lone wolf” emerged inside the borders of advanced economies to terrorize citizens of Paris, Brussels, Nice, Istanbul and elsewhere. Moreover, cautionary admonishment from high-profile visionaries regarding the weakly governed application of artificial intelligence amplified the already uneasy public debate about advanced technologies exacerbating unemployment and exposing society to new risks.

Companies, either alone or collectively, cannot control the underlying causes that give rise to these global risks, but better awareness of their depth, breadth and scope can inform plans and processes to address the challenges—and opportunities—these risks present.

The Global Risks Report, prepared by the World Economic Forum with the support of Marsh McLennan and other partners, looks at the major threats facing the world today.

The just-released 12th edition of the report highlights the social and political risks that crystallized throughout the world in 2016 and examines some of their root causes, which include rising income and wealth disparity, a fraught geopolitical environment and disruptive technological change.

The 2017 report also explores the interconnections among risks. Social instability was at the center of the web, both increasing and being increased by a number of major risks: Two major themes dominate the 2017 report: growing social and political turmoil and the emerging technologies of the Fourth Industrial Revolution.

Across the globe, people are sending a clear message to political leaders. They are hurting, frustrated and angry. They feel let down and they want change. At the ballot box in advanced economies, voters have rejected the political establishment and the status quo, most notably in the UK Brexit vote and the United States presidential election. Anti-establishment sentiment is also reverberating across the Eurozone, where populist movements sprung to life and are gaining momentum in Austria, Belgium, Denmark, France, Germany, Greece, Hungary, Italy, the Netherlands, Poland and Sweden.

Citizens have also taken to the streets in large numbers. In France, strikers have disrupted fuel supplies and there have been regular demonstrations in major cities against proposals for labor market reforms. In Germany, policies to accommodate the large influx of refugees have been a lightning rod for broader frustration. In countries such as Argentina, Brazil, Iceland, South Africa and South Korea, corruption exposures and allegations have depressed the trust of citizens in their leaders. Societies are increasingly polarized and the stress on established democratic norms is reaching a breaking point.

Democratic leaders are being confronted with some uncomfortable trade-offs. To restore democracy to a healthier state, policymakers must grapple with several major challenges, including how to make economic growth more inclusive, how to reboot the political system while maintaining continuity in systems of government and how to manage the renewal of societal identity while balancing elements such as assimilation versus diversity.

Surges in social and political instability have the potential to spawn a wide range of potential disruptions to business activity, from civil disturbance and terrorist attacks to government policy reversals and regime change. As a corollary, companies may also more easily find themselves on the wrong side of volatile social, political and environmental issues.

Technology will continue to play a vital role in promoting global prosperity. New advances are poised to increase economic productivity, provide radical healthcare solutions and combat climate change, among other benefits. The pace of innovation is also creating new risks, ones that will be amplified in a world where geopolitical and social instability are on the rise.

The report highlights artificial intelligence (AI) and robotics as a technology area needing better governance. AI is quickly showing it has the power to take jobs away from both blue- and white-collar workers, challenging policymakers looking for ways to build resilience to the impact of automation. At a time of significant unemployment concerns and growing social instability among lower-income groups, companies may also experience mounting pressure to align their automation and employment strategies with what is deemed politically and publicly acceptable.

The AI field is fraught with other complications, for example, new liabilities where legal precedent is embryonic at best. If self-driving cars cut the roughly 40,000 annual U.S. traffic fatalities in half, auto manufacturers might get 20,000 lawsuits instead of 20,000 thank-you notes. Where does the liability lie? Is it with the carmaker, the software developer or the individual programmer who wrote the initial code? Development in risk governance for AI in parallel with its commercial deployment is critical to ensure risk/reward tradeoffs are clear for businesses.

To thrive in such challenging times, businesses will need to think creatively about scenario planning, including second- and third-order consequences such as likely government responses and cross-border impacts. Gaming out plausible developments and worst-case scenarios will provide a baseline for gauging which assets are at risk and the scale of the potential damage. Having done this, companies can stress-test supply chain approaches and investment decisions while evaluating potential changes to business and risk management strategy that will help diversify or transfer exposure to disruptive events within and across countries.

New kinds of analysis are also needed. In this era of “fake news” and volatile social issues, firms should reevaluate whether they are doing enough to protect and manage their reputation with customers, employees and other stakeholders. Rumor and allegation are not new problems for companies, but in today’s “always-on” world, such matters can go viral within hours and be more challenging to overcome.

We are living in a time of high risk, but it can also be a time of great reward. Every challenge will need an innovative solution; while new policies may close some doors, they will inevitably open others. With a careful eye on the emerging global risks landscape, companies can thrive in this volatile environment.